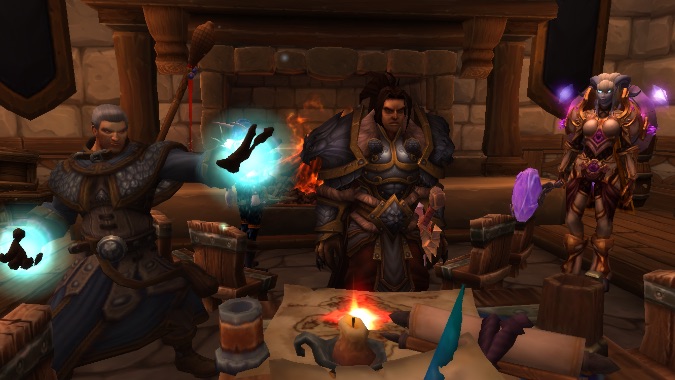 I know: since Tuesday, so much of the World of Warcraft chatter was about the garrison addon Master Plan being broken that it stymied almost all other discussion of the game and its latest patch. But now, the addon is back in action and we can talk about other stuff… right?

Let’s move on to your questions which are totally not all about one addon.

Does anyone have a link to Master Plan’s patreon or something?

I miss my Master Plan.

Okay, so we’re not done talking about Master Plan quite yet.

Though I’ve heard of some opportunistic individuals trying to cash in on those of us who want to support Master Plan’s development, there is a PayPal donate link right on the addon’s Curse page. I think that’s as legitimate as you can get.

Q4tQ: What are people’s impressions of 6.2? Is there less of a focus on Garrison chores? How does the shipyard play? Have you gone to Tanaan yet, and if so, how does it play?

Though I can’t give everyone’s impressions, but I can say that mine isn’t entirely positive. Besides the utter incompetence of Alliance leadership (let’s attack by sea, but we’ve forgotten how to build docks and ships, so you’d better recruit an orc to tell you to talk to a night elf to actually build ships), the new content already feels pretty grindy. Of course, this may be due to the fact that I’m incredibly short on time lately. Between the patch launch, the site redesign, other work responsibilities, and family, my time this week is at an absolute minimum.

I haven’t quite finished Securing Draenor yet, and though I know I can grind through most of those with scouting missives the apexis dailies are time-consuming and I might scrape up the time to do one a day… or none a day. This is a big problem since patch 6.2 only adds more dailies and more apexis-like dailies — meaning my one to none a day now has to cover a lot more quests. Tanaan is a Timeless Isle-like environment, where you’re surrounded by max level and elite mobs. Unless you’re in a group (which are, admittedly, easy to come by using the group finder) this can easily prove fatal… and that doesn’t work at all with me having a game window up while half paying attention to Blizzard Watch chat in case something comes up, which has been 100% of my patch 6.2 playtime so far. Though I’ve written about the new Tanaan reputations only taking a couple of weeks to grind to revered, I’m positive it’s going to take a lot longer for me.

Right now, I’m mostly logging on briefly to do shipyard missions, which are going slowly since my low-quality ships simply don’t have the abilities to counter most available objectives. In fairness, ordinary missions were a lot like this at first, too, as you worked on recruiting new followers… but needing 15 missions completed to advance to the next shipyard quest, combined with low (mostly 80% or lower) success chance and the fact that ships can be destroyed on failure doesn’t exactly make me think “Wow, I’m having fun!” There’s nothing I can do to improve my chance of success other than level my ships… which means sending them on missions with a low success chance where they might get destroyed. Argh!

So, to me, the patch already feels grindy and it’s only the first day. But it is new content which has some excitement level regardless… and I do suspect I’ll warm to it when I have more time to work on it. Right now, though, it just feels like a long list of chores on top of a long list of real life chores — I just can’t find the time to do all the things that need doing.

How are all of you faring? Better than me, I hope.

Q2ftQ: What is the best way to report bugs here on Blizzard Watch? I can’t post comments from Safari on iOS unless I’m on the Desktop version of the theme.

Though I answered this question in the comments, I wanted to bring it to everyone’s attention here, too. Bug reports are super helpful as we iron out the kinks in the new site and we definitely want you to let us know if you run into any problems.

Though any way to get our attention (Twitter, Facebook, carrier pigeon) can work, the best way to let us know about site bugs is to send us an email. We may not find the time to respond, but we appreciate your help in squashing site bugs!

Q4tQ: Can the EU version of WoW PLEASE use the UK spelling of NPCs etc when we play it in English?

I miss the letter U

I wish you good luck with this request, but considering the number of typos and grammatical errors that I’ve seen in Warlords to date, this feels like something that’s probably really low on the priority list.

Though I admit that I’m probably overly aware of the typo problem, as I typo hunt professionally. Sure, we still have typos on Blizzard Watch (plenty of which are made when I’m writing the Queue a little too quickly and on not enough sleep), but we also have a staff of three part-time editors reviewing all of our articles, on top of other responsibilities. I’d hope Blizzard would have more than that, but maybe the entire game is covered by a solitary copyeditor that they’re working to death. Either way, good luck, Blizzard copyeditors. With the amount of text in the game, you surely need it.

Q4tQ: 30 day auto return of mail is no longer happening in 6.2, bug or intended?

There have been a couple of undocumented changes to mail this patch:

It’s hard to tell if either of these are bugs or intentional changes because neither made the patch notes and Blizzard hasn’t commented. There’s actually a pretty big list of undocumented patch 6.2 changes, and we have to assume that at least some of them are intentional. But as to which ones… we’ll have to wait for  Blizzard to make some kind of comment.

Q4tQ.. What would you like to see story-wise in the next xpac?

I’m down with anything that doesn’t involve more orcs and more underwater zones. But between Gul’dan and Archimonde, I’m putting my money down on the Burning Legion being involved in the next expansion.

That’s all for today’s Queue! Check back tomorrow when Alex Ziebart will be filling in for Matthew Rossi. As always, leave your questions in the comments.