Know Your Lore: The Cipher of Damnation 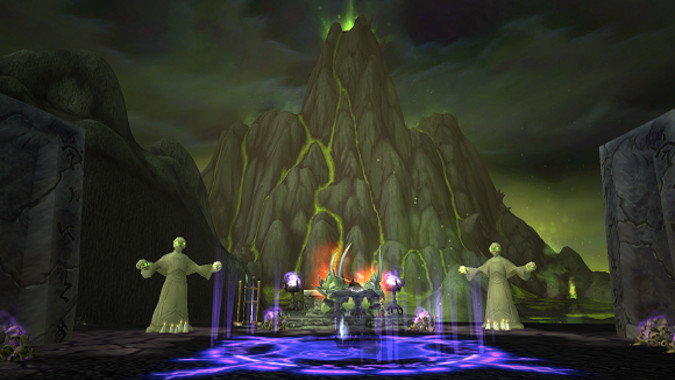 Some lore is simply too dangerous for mortals to know. Such is The Cipher of Damnation — an incantation so powerful, it managed to sever the connection between Draenor’s orcs and the elements they’d revered — is one of these. But the Cipher isn’t unique to Draenor. Indeed, such power has been invoked on Azeroth as well.

In the timeline we come from,  the Cipher was first used by Gul’dan in Shadowmoon Valley to create a massive fel volcano, the Hand of Gul’dan, and in so doing finally severed the connection between the shaman of the orcish clans that made up the Old Horde and their former elemental patrons. The Cipher is a spell of unfathomable power — it called Cyrukh the Firelord to Draenor and drove him mad in the process. Bound to a twisted world, corrupted by the demonic fel magics of the warlock, Cyrukh seethed for many years. Even after Gul’dan’s death and the breaking of Draenor by Ner’zhul, Cyrukh lingered.

We learn the truth of the Cipher’s use from Oronok Torn-Heart, an orc farmer we first meet in Shadowmoon Valley tending to his pigs. But Oronok was not always a farmer — he was an eyewitness and even a willing aide to Gul’dan’s act of destructive vanity. Once a shaman, and then a warlock himself, he served Gul’dan that fateful day that he read from the Cipher. The raising of the volcano, the summoning and binding of Cyrukh, these paled in comparison to the utter desecration of the orcish people and their ancient ties to the world that the Cipher caused. From the moment Gul’dan read the incantation, decades passed before the elementals of what would become Outland managed to restore some semblance of a connection to the world. That’s right — Gul’dan didn’t just sever the elementals from the orcish people, he broke their connection to the world itself. It took decades for them to restore it.

As terrifying as that is, consider Khadgar’s words.

The Cipher of Damnation is indeed a powerful incantation. Ancient and chaotic, the cipher itself has been responsible for many tragedies in the history of our worlds. That is to say, it is not unique to Draenor.

The burning symbol you saw was the mark of Kael’thas. His knowledge of the ancient words explains much.

Your discovery has roused the naaru. A’dal has requested your presence in Shattrath City. Should you choose to come, seek me out at the Terrace of Light.

We know that Kael’thas managed to use the Sunwell to create a portal to allow Kil’jaeden into Azeroth. It now seems clear that he used the Cipher of Damnation to do it. Was this why Gul’dan kept it? Oronok tells us that Gul’dan had the Cipher in his private quarters in Karabor for over two decades, and even Illidan thought better of using it, securing it in turn. This is likely where Kael’thas found it, and this leads one to wonder — did reading the Cipher first give Kael’thas the idea to ‘switch paymasters’ and join with the Legion?

Before we go too deeply down that path, let’s consider Cyrukh the Firelord, and another Firelord we know. 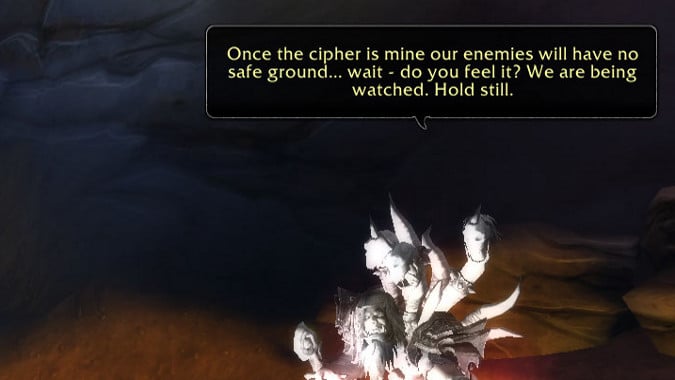 It is not unique to Draenor

In our timeline, Gul’dan’s use of the Cipher may well have contributed to the ultimate destruction of Draenor and birth of Outland — we have no way of knowing for certain, but it’s clear that the elements were in no position to defend the planet from Ner’zhul’s portals after Gul’dan’s actions. Decades later, it took a group of heroes to reconstruct the Cipher and use it to lure Cyrukh the Firelord out, and only through his destruction were the elements finally able to fully heal the breach between themselves and the world.

But as Khadgar said, the Cipher is not unique to Draenor. Consider another Firelord, summoned in a plume of fire so intense that it wiped out an entire region. The area today known as the Burning Steppes was once a normal mountain range to the north of Redridge, settled by the Dark Iron clan of dwarves after their exile from Ironforge. Following the War of the Three Hammers, the sorcerer-thane Thaurissan lost his wife Modgud in an attack on Grim Batol and was pushed back to the Dark Iron settlement of Thaurissan (yes, he named it after himself — he was self-proclaimed Emperor of the Dark Irons and wasn’t particularly humble). Realizing he couldn’t defeat his enemies, he turned to sorcery to hopefully turn the tide. Along with the Seven, great patriarchs of Dark Iron culture, he descended into what is today the Molten Core to summon forth a powerful spirit to destroy his enemies.

Now, think back to when Gul’dan used the Cipher. He created a titanic volcano and trapped Cyrukh the Firelord on Draenor.

When Thaurissan cast his spell, he created a titanic volcano (Blackrock Mountain) and trapped Ragnaros the Firelord on Azeroth. But Thaurissan and the Seven, and many other Dark Irons, died instantly when Ragnaros erupted into the world — his explosive entry into Azeroth destroyed the mountains and caused seething destruction as well as damning the Dark Irons as a clan to the service of the Firelord. It seems that Thaurissan simply didn’t have the luck (or perhaps skill) that Gul’dan displayed — perhaps severing the connection between Draenor and its elementals was the only way to survive using the Cipher in this way. It still seems clear that Thaurissan used the Cipher, just as Gul’dan did — when the great black dragon aspect Deathwing sought the unmaking of the world, he even made common cause with Ragnaros, and attempted to create an elemental unrest as profound as that which wracked Draenor just before it became the shattered world of Outland.

So now we have a good candidate for that use of the Cipher that Khadgar mentioned on Azeroth. But so far we’ve talked about Outland, and Azeroth. The Cipher, however, is also present on this new timeline, and we may indeed have cause to fear it soon.

Once The Cipher is his 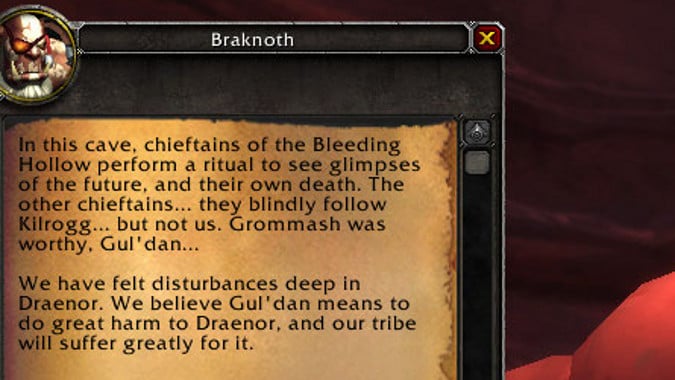 So far we’ve seen that in our timeline Gul’dan used the Cipher to bind an elemental lord and shatter Draenor’s connection to the elements. What might he use it for in this Draenor? Breaking the connection between Draenor and its elementals would weaken his enemies greatly and force the Iron Horde into the arms of the Burning Legion even faster. And remember, it seems likely that Kael’thas used the Cipher to call Kil’jaeden bodily into Azeroth. Is the Cipher the key to bringing Archimonde to Draenor?

The Cipher is powerful enough to lay waste to vast swaths of territory. It is a secret mortals were not meant to know. And in the hands of Gul’dan, it has already ruined one world.