The Queue: Tomb of Sargeras, Halls of Valor, mobility 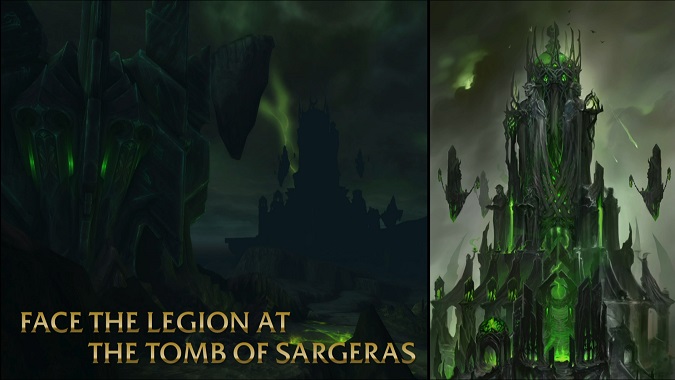 I’m Matt, I’ll be answering your Queue questions today. Let us go and do that now.

Do you ever think we’re gonna see another episode of Azeroth Armoury?

I have no idea. I would like to, absolutely, especially if they did either Ashkandi, Quel’Serrar, Thunderfury (and man, that would be a huge challenge) or maybe the Doomhammer or Ashbringer, to fit the upcoming expansion. Or Warglaives, that would be cool. A matching set of Warglaives.

QFTQ: With the increase of mobility each class has received over the years, the emphasis of mobility and the addition of double jumping in the form of the Demon Hunter; what is the likelihood of Bllizz updating combat in the game to make it more dynamic (ie. Adding dodges and the like ala GW2)?

Extremely unlikely. One of the things that Blizzard hates to do is make changes that will make it hard for returning players to return and pick up the game. That’s why things like double jump weren’t added to every class, but rather given to the Demon Hunter to test it out and see how disruptive it ends up being. WoW as a whole is amazingly conservative in terms of how it changes the gameplay experience. If you played last in Vanilla and came back to WoW now, there are a lot of changes to absorb, but you could absorb them while playing a game that doesn’t feel particularly different than it did ten years ago.

If the PvP changes (and possibly re-balancing racials) in Legion make it so the queue times are more equal, I expect them to drop Mercenary Mode.

This is entirely possible. But I tend to believe that once a feature is introduced it ends up often being used in ways we don’t initially foresee, and I think Mercenary Mode might end up being one of those — in fact I suspect it might be removed because it has unforeseen consequences the way reforging did.

When reforging was introduced, only some of us really saw that it would end up changing gearing to the extent it did. Sure, you could use it to take a pair of dodge pants and make them marginally more useful. But most of us used it to maximize our favorite stats instead. Fire mages and fury warriors slapped on the crit, for instance.

Now, I don’t pretend to see much of a way to abuse Mercenary Mode right now, or even to use it aside from random PvP. But if any group of players is going to finda way to use it that Blizzard didn’t foresee, PvP’ers absolutely are that group.

Gul’dan raised Highmountain and a entire civilization of Tauren back in Tides of Darkness?

Perhaps. Or perhaps that stuff was already there (after all, there was an entire continent to the south and to the west we didn’t know about at the time – both Pandaria and Kalimdor were long lost and hidden at the time that Gul’dan went looking for the Tomb) and Gul’dan merely raised a specific location. Or maybe he just lied. The dude lied a lot, remember. In Warcraft II, we don’t actually see Gul’dan do it, we’re just told he did by one of Doomhammer’s spies. And when we see Gul’dan in flashbacks in WCIII, again, we don’t see him raise the island or say at any point that he’s done so.

It’s interesting to note that Illidan says he learned of the Tomb and the Eye of Sargeras via his consumption of Gul’dan’s skull and the gaining of his memories, but according to the flashbacks, Gul’dan died before reaching the Eye. And it was the Eye that Illidan used to sink the temple that he and Maiev were in. So was it Gul’dan at all who raised the tomb, or someone/something else? And what exactly did he or she raise? Is it the Tomb of Sargeras or just some smaller temple of a vast complex? I suspect we’ll find out in Legion.

Lore question: is it plausible for my nelf demon hunter to have been the sibling of the Naga Battlemaiden from Vashj’ir?

Possible, but not terribly likely. The commenters listed several problems. The naga weren’t just any Highborne, they were the Highborne that were Azshara’s closest servants. If you’re playing a nelf demon hunter who was the sibling of one of them, you’d need to explain why you didn’t join Dath’remar when he and the other Highborne were exiled, or you were one of the Highborne who was living in places like Dire Maul when Illidan returned and you joined forces with him, something like that. It’s doable, but it will take some work on your part to justify it.

Q4tQ: As we will be encountering the Tomb of Sargeras in Legion, has anything been mentioned about the Avatar of Sargeras yet?  Is it just deader than a really dead dead thing, or did perhaps it’s Spirit somehow found it’s way back?  Is there anything mentioned, or just pure speculation at the moment?

All we know is that the Tomb is the site of the Legion invasion. There’s been no mention yet of the Avatar of Sargeras, the Eye of Sargeras, or anything about Aegwynn’s ancient fight and her choice to place the Avatar in the Tomb. Lots of room here for story.

Warrior Class Hall, where do you want it and what should it be?

The vrykul have a base called the Halls of Valor.

This seems like a decent place for the best Warriors in Azeroth to congregate. It’s essentially Valhalla. And with the revelation that the true, uncorrupted Val’kyr abide here and bring the best vrykul warriors to abide here, maybe they could realize in the face of the Burning Legion that it’s time to broaden out and allow the best from all races in.

Failing that, maybe we could take over Blackrock Mountain.

Okay, that’s the Queue for today. See you all Friday.