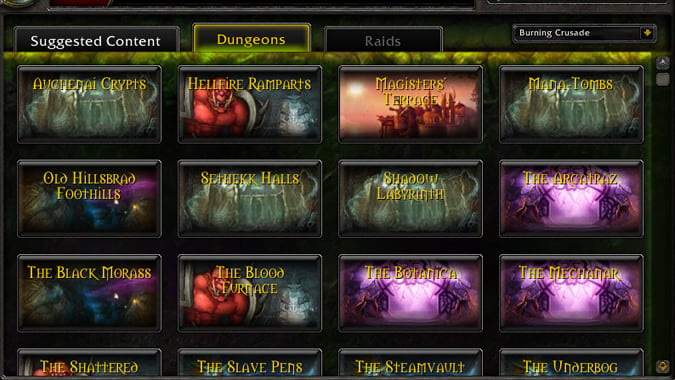 It didn’t really occur to me until we finished yesterday’s livestream exactly how many dungeons we had in Burning Crusade. We’ve been diligently trying to hit every dungeon in the expansion at least once, but as it stands right now, we’ve got a bunch that just popped up now that everyone’s level 68, and we’re almost ready to move on to Northrend. On the one hand, that’s a little problematic, as we would like to clear everything, but on the other, it’s a problem I simply cannot remember having in recent years. Which leads me to wonder what exactly happened to the piles of dungeons we used to get every expansion — where did they all go?

It was a gradual drop — Cataclysm had a few less dungeons, Mists dropped that number even further, and now in Warlords we’ve only got eight to deal with. In Burning Crusade we had sixteen of the things, and only one — Magister’s Terrace — was added late in the game. The rest were there as we were leveling, and some weren’t even accessible until you had level 70 and flying in order to get to them. I’m not sure what happened, exactly. Was it simply a matter of dungeon gear not living up to what you could get from LFR, thus making dungeons less important as additional content? Was it just time constraints? It almost feels like LFR is the culprit, just by merit of when that drop-off happened. It wasn’t until Mists of Pandaria, and LFR was introduced at the end of Cataclysm, so it feels like the two may be somehow connected — I could be way off base, of course.

But I still miss having loads of dungeons to choose from. The very fact that there were so many meant that they never really had a chance to get too dull before the next expansion rolled around. I don’t think I noticed it quite as much in Mists of Pandaria simply because we had scenarios available as well as dungeons, so that small group content was still there, if in a slightly different form. With no queue-able scenarios and only eight dungeons this time around, it just feels kind of…empty when you look at the dungeon journal. Do you guys miss having a wide selection of dungeons? Which expansion do you think had the best variety? What’s your favorite dungeon in World of Warcraft? Are you hoping we’ll see more in Legion?