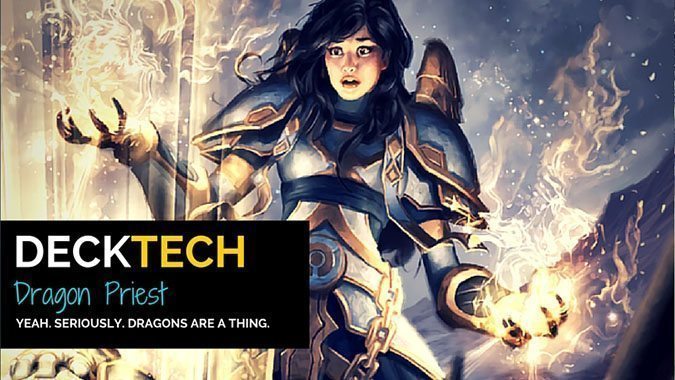 When Blackrock Mountain debuted, dragons were all the rage. Legendary bombs like Nefarian and Chromaggus looked as if they were going to be the big players. Hungry Dragon and Blackwing Corruptor added more midgame threats. Sadly, the game was just too fast. The Dark Iron Dwarves and their beer-guzzling Grim Patrons entered the spotlght and put to rest any spark of hope that dragon decks would have an effect on the meta game.

Grand Tournament’s release changed that. Priest players now have an extra deck type that can be played: Dragon Priest. Lets get to it!

As you can guess, the theme and strategy of Dragon Priest revolves around the use of dragons. The Grand Tournament added a few key dragon cards that work well with Priests and their Hero Power during the middle to late game. The decklist you find below is a variation used by Hearthstone and Magic: the Gathering veteran Brian Kibler.

Many of your cards require you to have a dragon in your hand to activate their special ability, so having one expensive dragon in your opening hand (like Ysera) as an activator isn’t the most terrible thing. What you want to look for are Northshire Clerics, a Power Word: Shield to go with it, Twilight Whelps, and Wyrmrest Agents. Those are all cards that will help set you up for the early game. There is one copy of Shadow Word: Pain there to help you out in the event you’re matched up against aggressive, early decks. Dark Cultists and Twilight Guardians are keeps if you’re going second.

Try to extract maximum value out of your Northshire Cleric. The Cleric can help stop the early aggression from low cost minions plus you can heal her up some to net you more cards. Power Word: Shield and Velen’s Chosen are great ways to buff it while Wyrmrest Agents and Twilight Guardians can help protect it. The dream sequence is a buffed Twilight Drake on turn 1, a taunted Wyrmrest Agent on turn 2, a buffed Blackwing Technician on turn 3, and a Twilight Guardian on turn 4. That will create a tough wall to break through at that stage of the game for your opponent.

Your mid game transition should continue with constant threat drops. Use the Blackwing Corrupters to blast a hole open on your opponent’s side of the board. If there aren’t any threats, play your Azure Drake to keep digging for more cards. If your early game minions are still hanging around, your Hero Power can certainly keep them sustained longer.

Lightbombs and Holy Novas can be used defensively in case the board state isn’t in your favor. Too many opposing minions? Blow them all up and heal any of your remaining minions. If your Azure Drake or any Velen’s Chosen buffed minions can stick around, your Holy Nova is guaranteed to clear everything at this point of the game. Your lone Wild Pyromancer serves as an additional deterrent to other early game threats like those Silver Hand Recruits generated from Muster for Battle.

Your late game presence is anchored by one significant dragon: Chillmaw. For 7 mana, Chillmaw acts as a wall of death. All you need is a dragon in hand. If Chillmaw dies with a dragon in hand, laugh and watch as the board gets cleared (or sufficiently damaged). You could always attempt to bluff with it and leave your opponent second guessing themselves wondering if you have a dragon in hand or not.

Ysera and Chromaggus make up the rest of your late game finishers. Ysera can continue generating you additional cards to help you close out the match when most of your opponent’s removal spells have been used. On top of that, her 12 health can effectively stymie opposing minions while your Hero Power continues to sustain her in the long run.

Plenty of alternatives exist for this deck. You can cut some dragons in favor of other cards. As an example, the Shrinkmeister and Cabal Shadow Priest package offer opportunities to steal select key minions. You shrink them first and use the Cabal afterwards. Of course, you can just steal minions outright with Mind Control.

There’s been a surplus of Warriors, Paladins, and Hunter decks running around on the ladder. I felt Harrison Jones offered a great way to counteract your opponent’s weapons and net you some card draw in the process. Sylvanas is another fantastic filler in case you happen to be missing a potential card from your deck. Rend Blackhand provides a huge tempo swing if you can catch a legendary minion with it in the late game.

I only listed Holy Champion just because I really like her as a card. But she doesn’t really fit with the whole dragon theme that’s going on.

Druid: Combo Druid and Ramp Druid continue to be the main staples. However, I’ve started seeing snippets of Token Druid decks making a come back with cards like Living Root. Turn 9 is make or break for when they get their Savage Roar and Force of Nature combo prepared. Keep trading effectively and starving them of their tokens and other minions. Keep your health above the magic number of 14.

Hunter: Definitely want that Shadow Word: Pain here early so you can burn it against their Knife Juggler (or a Leokk). Otherwise, not much to say here. Make sure you have a dragon to power up your Wyrmrest Agents and Twilight Guardians. That should help hold down the fort against the early rush. Your Hero Power ought to negate the Hunter’s.

Mage: So many different Mage decks and all of them are trouble.  You’re going to have a bit of a tougher time against the class in general. Effigy and Mirror Entity help give the Mage extra value from newly generated minions. Combo decks like Freeze Mage will work to simply outlast you entirely. All the draw cards in the deck mean that you’re going to hit fatigue earlier than most.

Paladin: You should have this match up locked easily. The Secrets Paladin deck should flame out and run out of cards once you enter the mid game. Keep shutting down their existing threats. Your dragons and other minions can afford to break their secrets one by one and still survive most of it. Once those are gone, they’ll be easy pickings.

Priest: Ugh. The mirror match. It’s going to be long and it”s going to be a slugfest. This match might come down to whoever’s Ysera sticks on the board the longest. Bait out their removal spells. Keep your minions (especially the taunted ones) healthy and at high health to soak and absorb incoming attacks.

Rogue: Combo decks will hurt you the most here. Rogues have many different ways to remove your minions or to return them back into your hand. They generate tempo at just the right moments and it can set you back substantially.

Shaman: Totem Shaman decks want to establish board presence early on and overwhelm you. Play taunted dragons if you can and let your board clearing spells take care of the rest. You are favored in this matchup.

Warlock: You should be able to dismantle Zoo Lock with ease due to all the taunt minions and board clearing spells you have. Hand lock might be a little more complicated. You’ll need ways to eliminate their giants. If you can do that, you’ll be in an excellent position to take the match. Shadow Word: Death should be used for those. If you run into a streak of them, consider adding a Big Game Hunter for extra removal.

Warrior: Control Warrior is going to get the better end of the match in most cases. Thankfully, most Warriors you’ll encounter on the ladder play Patron Warrior and this deck does a good job knocking them down with all the taunts and removal that’s available.

Have fun on the ladder! Give the deck a spin!

Blizzard Watch is made possible by people like you.
Please consider supporting our Patreon!
Filed Under: Deck List, Dragon Priest, Hearthstone
Advertisement