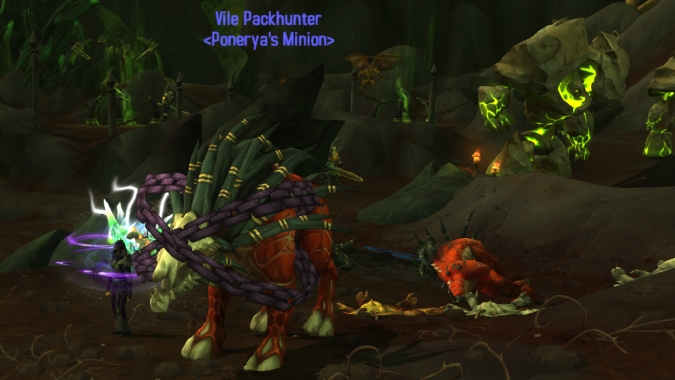 Banishing things is fun, in a very Warlock kind of way. Being able to interrupt your raidmates tunneling on a mob by switching the Banish target around the mob pack is giggle-worthy. Banishing the target at sub-10% is also funny, though it often happens when one Warlock starts to cast to cancel the Banish and another accidentally also tries to do the same thing, ending up with a target that is quickly un-Banished then Banished again.

While Banish is the only crowd-control Warlocks can do to elementals, it’s just one side of the coin for demons. We also have this Enslave Demon ability, which sometimes feels like the last of the just-for-flavor spells left. Detect Invisibility is gone, so is Drain Mana, and even our useful Curses have disappeared. But we still have Enslave Demon, which sees most of its use whenever I first meet a Demon-type NPC and wonder, “Can I enslave that?” 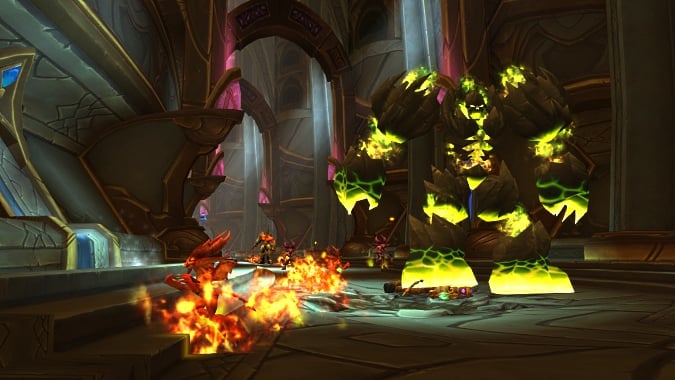 The usual rule is that if the demon looks like a Warlock pet, it can probably be enslaved by the Warlock. We have plenty of felguards, wrathguards, and doomguards hanging around, though they’re sometimes given different names. Doomguards become doom-whatever with their Doomcrushers and Doombringers. Felguards are anything from Felguard Sentinel to the vague “Demon Raider.”

We’ve also seen Shivarra hanging around as well as Succubi, though the Succubi often show up in Black Temple style as concubines of some sort. We’ve seen Observer-like eyes as well as Kil’rogg-like eyes, though the latter are more likely to die on you than the former. Abyssals are a proud tradition, and many of the Supremacy demons are favorites of what old world Warlocks found interesting to enslave.

Because we’ve had Grimoire of Supremacy for a couple years now, these once-supreme demons seem old-hat now. I usually only keep one around for a while if I like one of its abilities, something unique that my normal demons don’t get to have. There’s the Wrathguard Destroyer in southern Talador that does the fel lines that burst up into the air with fel fire, and they also don’t shrink down to pet size like most humongous enslaves will do.

In Auchindoun itself, the Cackling Pyromaniacs are the only things that respond favorably to Enslave Demon, but I don’t mind using their AoE felfire ability. These imps are melee imps, instead of the usual ranged fireflingers, and it’s funny to see an imp melee swing the butt of a felguard you’re fighting. You technically can enslave the Abyssal in Auchindoun, but it breaks the enslave after about 10-seconds as it tries to do the Fixate mechanic on you anyway. 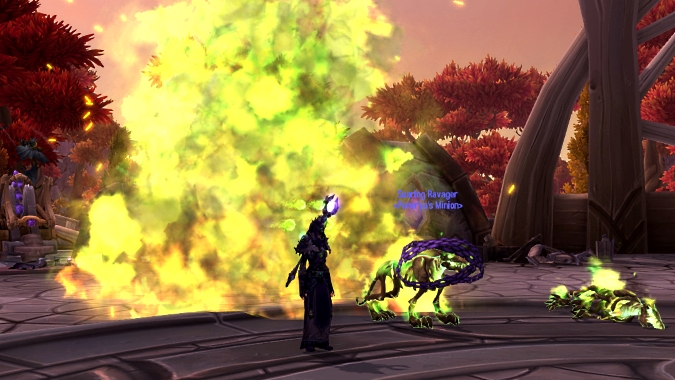 One of the demon types that keeps popping up all over Draenor are the demonic skeleton dogs that are covered in felfire. Immolation auras of the fel type are a common theme in demons (see: abyssals and infernals), and the Searing Ravagers in Talador have just that one ability: Fiery Trail. These demons also show up in the Demonology set bonus for Tier 18 as they randomly spawn off Molten Core procs.

It’s cool to see these burning dogs as minions — mostly because we can tease the Hunters for not having one. The ravager model is more like the traditional hound look rather than a wolf-like pet — even when the model carries a mob name like the Fel Wolf in the northwestern corner of Frostfire Ridge. Warlocks might not bury their beloved Azerothian hound pets when they die, but might instead bind their souls to the Twisting Nether, raise them from the dead and infuse them with felfire. Or … at least that’s what a Ravager looks like to me.

The traditional “hounds” of demonic-loving beings aren’t wolf-like, however, at least not in the furry dog kind of hound. Felhounds have long been the traditional demonic dog, with felhunters earning the nickname “felpuppy” or simply “puppy” from Warlocks. The coolest new felhound-looking dogs on the block are the felstalkers, which will eventually be part of the Legion Collector’s Edition as both a pet and mount. I felt annoyed that everyone would get to have such a cool, should-be-Warlock-only kind of mount, but for now I’ll settle for how I can have one as a pet, at least five minutes at a time. At the top of the Throne of Kil’jaeden in Tanaan Jungle, the Vile Packhunters roam in threes, so you’ll have to kill two to enslave one. 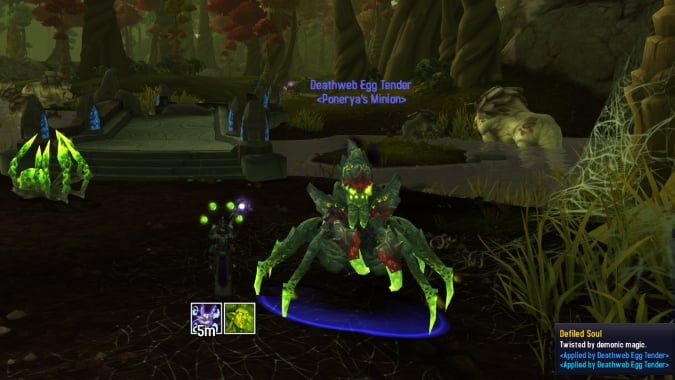 Typically, even corrupted beasts tend to still classify as Beast NPCs, which leaves them unable to be enslaved. At worst, demonic beings that look like they ought to be enslaved if not tamed, but aren’t, are an entirely different class I’ve come to loathe — Aberration. It looks like a demon, hits like a demon, even sometimes yells like a demon, and yet you won’t be able to enslave it because it’s an Aberration class, and Enslave Demon works only on Demons. The furrier Fel Wolves are like this, which is why Hunters need to do special things before they can tame a Wolf, because they need to turn it from an Aberration back into a Beast.

There is one “Beast” that isn’t an obviously demonic dog that we can enslave in Draenor — the Deathweb Egg Tender. Down in the Deathweb Hollow in southeastern Talador, at first you think you can’t enslave these spiders. The Deathweb spiders for the most part are Beasts, but the Egg Tenders are oddly classified as Demons, and you can enslave those! What’s particularly interesting is their abilities aren’t even a felfire version of regular spider abilities; the abilities are still regular fire and nature types of damage.

If Enslave Demon were to evolve as an ability, corrupting things is the direction I see it going in. I’d almost like to see a Corrupt Beast kind of ability, where we can do the reverse of Hunters and turn certain Aberrations into Demons for enslaving. However, five minutes is too short an enslave time to be terribly useful in a boss fight. Even when the boss fight is designed around having a specific demon enslaved, you have to recast the spell. I also am not sure that corrupting regular creatures would not end up as basically a demonic tame, which draws a parallel a little too close to Hunters for fantasy reasons. 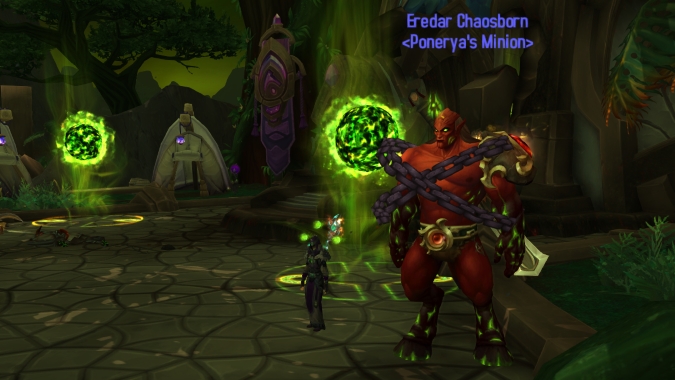 I was prowling for demons to enslave, and I noticed that the humanoid-looking Eredar Chaosborn in Temple of Sha’naar were classified as Demon NPCs. I thought, why not, the worst that can happen is they immune out of the enslave — instead it worked! I had my own pet fel Matt Rossi, of sorts. Eredar Chaosborn are NPCs that usually require a pet tank from me to kill, but they’ll easily take on other Chaosborn in the surrounding Temple grounds. Whenever that daily objective comes up, I gladly abandon my voidlord for a bit and take on a Chaosborn instead. They have that felfire line called Fel Sear as well as shadow-infused hard melee strikes in Chaos Blade. There’s also a Shadow Infusion ability, which seems like a shadow-school Immolation Aura to me.

While I doubt that we’ll be allowed to simply enslave Burning Legion members like this when we go to the Broken Isles, this is a cool mini class flavor out in the world, and I want to see more of it. It’s cool to walk into an area and in the name of exploration be able to temporarily acquire new and different minions to play with. It’s especially fun when it’s a clear-cut different kind of mob, rather than yet another demonic version of a regular mob.

Enslave Demon is an ability on the brink of change for Legion. It could either disappear due to button bloat, as we really don’t use the ability except in quirky situations or casual questing, or it could possibly change into a new mechanic with the revamped Demonology specialization in Legion. Demonology is losing its Metamorphosis focus and returning to focus back on using demons, so wouldn’t Enslave Demon be a perfect choice for a new demon-generating mechanic? We’ll have to wait and see.