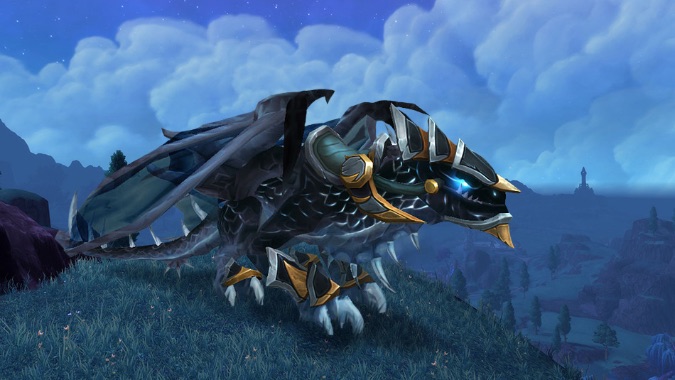 Coming soon to the PTR is a big surprise: World of Warcraft‘s patch 6.2.3, which features Cataclysm-era Timewalking dungeons (plus a new Timewalking dungeon for both the Burning Crusade and Wrath eras), the chance to get a new Infinite Timereaver mount (above) from Timewalking bosses, cross-realm Mythic raiding, Valor points for Heroic and Mythic dungeons (which can be used to purchase ilvl upgrades for gear), a Grove Warden mount for defeating Heroic or Mythic Archimonde (meaning it will not be a store mount), Arena Season 3 (with new gear ranging from ilvl 715 to 740), and rewards up to ilvl 695 for players in Tanaan and 725 for players running Mythics.

Looking at all of these changes… I have to say I didn’t expect this. Valor points? Valor points? Though it isn’t yet on the PTR, let’s dig in to just what this new patch will have to offer players.

So what is Blizzard up to with this bevy of changes? Clearly, they’re trying to stretch out Warlords‘ content and give us something more to do while we wait for Legion by giving us more reasons to run dungeons and new upgrades to grind for. The dungeons in Warlords have long felt like their rewards weren’t worth the time it took to run them, leaving them deserted as LFR wings rolled out. With Valor points offering ilvl upgrades, there’s an all new reason to go back to visit dungeons (and raids) to eek out a few more ilvls. Mythic raiding itself may be a bit easier with the addition of cross-realm — as well as improving players’ ilvl — which will invite more players into this level of content.

Beyond the same old ilvl grind, however, we have the new Timewalking dungeons. Sure, it’s recycled content (and another ilvl grind), but Timewalking has proven to be a lot of fun and I’m looking forward to checking out the latest dungeons. Cataclysm Timewalking will bring us Grim Batol, Stonecore, Lost City of Tol’vir, The Vortex Pinnacle, Throne of Tides, and End Time, while Magister’s Terrace is joining the Burning Crusade lineup and Pit of Saron is joining the Wrath lineup.

Check out the full details in Blizzard’s patch 6.2.3 preview and see the patch notes below.

Item Upgrades and Valor are back!