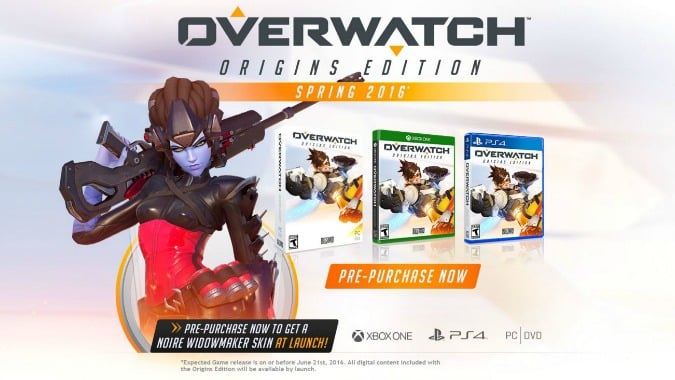 Earlier today we reported on a tweet showing a gaming store Overwatch promotion box displaying Xbox One and PS4 logos as well as the words “Origins Edition.” The price was said to be $60, but no information on the content was revealed. Until now.

Update 2: We know now everything included in Origins. See below.

Reddit user Rintoothetiger went to his local Gamestop today and was able to buy a prepurchase PC code for Overwatch Origins Edition for $40. He shows proof of his purchase receipt and that he was given a code to enter into his battle.net account. He did so, but nothing has happened yet on his account.

We don’t know what the $40 will get you, but one thing that this above promo ad reveals is a new skin for Widowmaker called Noire. This likely is a founder’s pack deal that will get you a number of heroes and skins to start with. I suspect the base game will still be free to play and we’ll know for certain tomorrow when BlizzCon kicks off.

Update: Fine print in the above ad says all prepurchased content will be available by June 21, 2016. Confirmed launch date? Mmm, maybe…

Update 2: Game.co.uk has listed a page for Overwatch Origins Edition and has included the following in the description: