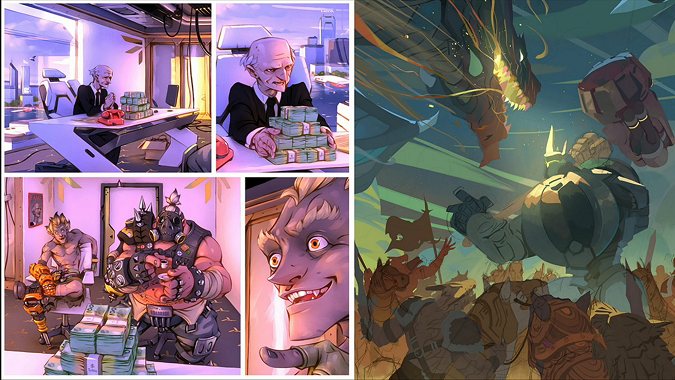 Just announced at BlizzCon was the news that in addition to the already announced Overwatch graphic novel, which will explore the relationship between Soldier:76 and Reaper among other things, we’re also going to get a series of one-shot short comics set in the Overwatch universe.

If you remember, as an example Gul’dan and the Stranger or the other comics we saw with Warlords of Draenor, it’s basically that kind of storytelling – short one piece comic stories that explore elements of the setting. The sample art features Roadhog and Junkrat, so it’s likely the two of them are featured in some way in one of these comics. I’m very much hoping at some point they dive into the Omnic Crisis and give us more of that backstory. It’s a good move, and I think the setting is a very comics friendly one.

Blizzard Watch is made possible by people like you.
Please consider supporting our Patreon!
Filed Under: Comic Shorts, Comics, Omnic Crisis, Overwatch
Advertisement