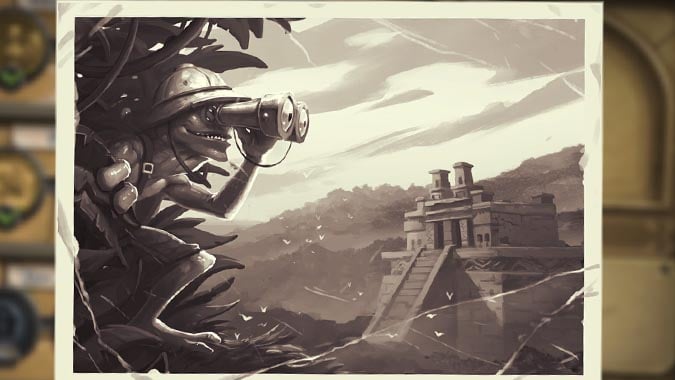 Welcome to week three of the League of Explorers! Reno and company need your help in their quest to assemble the Staff of Origination. After a quick one week break, we’re back at it with a new wing in the Ruined City. The third wing consists of three encounters and … there’s Murlocs involved.

Go ahead and give the adventures a shot on your own first but if you get stuck, check back here to the guide along with a few recommendations. Three class challenges are available this week: Hunter, Shaman, and Priest! 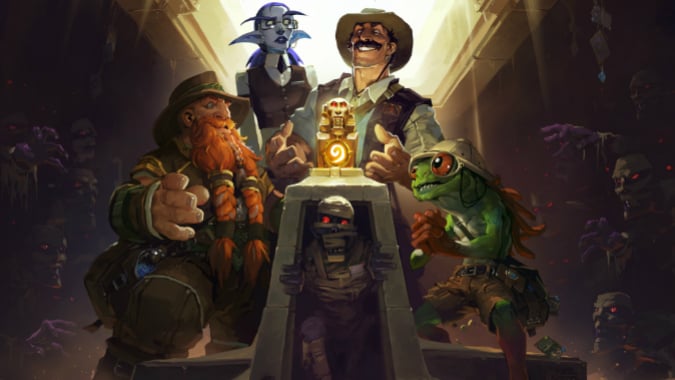 Theoretically, you could rock a Mage deck packed with Blizzard and Flamestrikes and coast through a victory with all three of these fellows on normal mode, with some minor adjustments here and there. Actually, I believe our ranking Hearthstone expert among Blizzard Watch staffers, Dan O’Halloran, held his own with a Freeze Mage deck.

For Lord Slitherspear specifically, his Hero Power allows him to summon a Hungry Naga for free.

On normal, the Hungry Naga that are summoned have a variety of attack and health points. Some are 3/3, others range from 1/1 to 5/1. Board clearing spells are highly recommended here. You’ll also notice that Slitherspear starts with a Cauldron minion in play, that when destroyed grants you Sir Finley Mrrgglton! I believe I went with Secrets Paladin on my attempts on normal and managed to burst him down with near-perfect curves.

Ugh, this guy’s a huge pain on heroic. I had to resort to the Priest deck with Kel’Thuzad and a taunt minion, to stall until I could get set up. Another option you could try is a Priest deck with Inner Fire and Divine Spirit. On top of the 15 armor he starts with, the summoned Hungry Naga get progressively stronger every turn. So while they start at 1/1, the next turn they’ll be at 2/2, then 3/3, and so on. The stat gains are applied as a buff, so silencing effects will reduce them back to a more manageable 1/1. With the Priest deck below, most of your spells and minions have the ability to silence. Your Shadow word spells, Lightbomb, and Big Game Hunter will help buy you more time with the extra removal. Your goal is to draw into Kel’Thuzad with a taunt minion in play. If you can pull that off, the match becomes trivial at this point.

Giantfin’s Hero Power gives him the capability to draw cards until he has as many as you do — basically, he can Divine Favor every turn. Not only that, he has a spell that allows him to revive any recently slain Murlocs. You can’t go for the mill strategy, due to the fact that his deck is larger than normal. In order to capitalize against the Hero Power, play something fast and aggressive.

Face Hunter and Zoo Warlock decks are smart choices, as they both drain your hand quickly, and you can lay down a swarm of minions to contest the board. Giantfin will overwhelm you if he survives long enough. You need to balance your deck with elements of both  minions, and minion clearing spells. Alternatively, you can switch to something like Freeze Mage, as that’s effective on either difficulty level. You can check out the modified list below.

On heroic, Giantfin’s Hero Power changes. Giantfin draws two cards a turn, so he’ll always have the advantage in hand size. In addition, his Murloc resurrect spell now brings back 5 Murlocs instead of 3. I recommend digging for some sort of removal during the mulligan phase. If you happen to draw at least a Blizzard or Flamestrike in your opening hand, it’s recommended that you keep at least one. Try not to play your Flamewakers on curve so you can maximize their spell procs. Between Flamewakers and Wild Pyromancers, your spells should should soften the board, if not outright clear it. Keep a close eye on your life total and count the amount of damage Giantfin can do to you every turn. Summoning Stone is a genius pick in this deck. The same guideline with Flamewakers should apply when you play Sorcerer’s Apprentice: Pair it with a spell to take advantage of the reduced mana cost if you can.

The name of the game here is minion value. You want to play minions that will stick on the board (or generate extra minions for you). Haunted Creepers are good in case they get taken out, as they’ll spawn two more. Murloc Tidehunter’s Battlecry of summoning a Murloc Scout also works, because you’re getting two minions for the price of one. Control Paladins (or just Paladins, period) play well here, since Muster for Battle provides a bevy of 1/1 Silver Hand Recruits that will morph into something slightly better on the subsequent turn. Ultimately, you won’t be able to control the minions you have in play that happen to stick around due to her Hero Power, so your tactics will vary from match to match. I ended up using a Zoo Warlock deck, and rushed both her and her board down as much as I could. The Imps generated from Imp Gang Boss (which was rare) or Imp-losion help further augment your side of the board.

On heroic, I changed gears a little bit. I loaded up with a few cheap minions and gradually worked my way up. Equality and Consecration are there for reset purposes. Mind Control Tech is in there to help clutch steal a minion. Any of these can be rearranged to something else. Piloted Shredder, Haunted Creeper, and Worgen Infiltrator provide you with “safe” minions where if they get removed, at least you’ll still get something out of them. Buckle up, because this match is going to be a slugfest. Be patient with this one, because you may end up with minions that are useless.

If you watch the video below, you can spot the moment where the AI suffers a brain fart and does not execute the game winning move of defeating me. A little element of luck is never a bad thing.

That’s it for this week! We’ve got one more wing left debuting later on which will give us the fabled Golden Monkey. I’m not sure if I had a favorite matchup. All of them were challenging in their own unique way, but Lady Naz’jar ended up being the most unpredictable due to the nature of her Hero Power. The matches weren’t something you could strategically plan around, as everything depended on the minions you end up with. In that sense, I like that element of randomness. I’d love to see that as a Tavern Brawl mechanic one day.