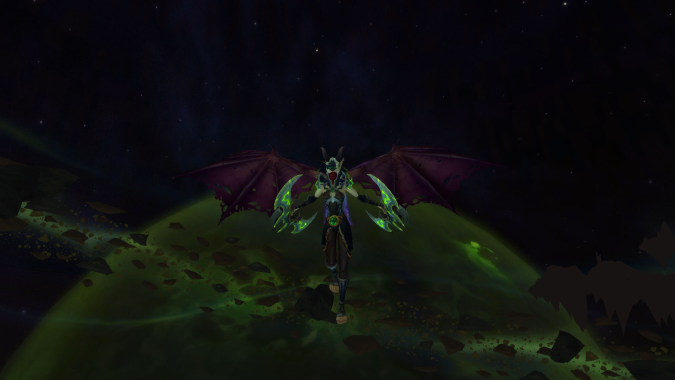 While many received a brief glimpse at World of Warcraft’s new Demon Hunter class during BlizzCon, the class only just recently became more widely available when the alpha was released. I’ve managed to level a Demon Hunter to the current level cap (104) and I must say, they’re shaping up to be a phenomenal (possibly game-changing) addition to WoW. Below are my thoughts on the class thus far, as well as some highlights to show off just what makes Demon Hunters so appealing.

Getting where you want to go

Let’s start with the big one: mobility. If you want to get somewhere as a Demon Hunter, chances are you will get there as a Demon Hunter. This is due to a plethora of abilities that would be impressive all on their own, but together push the boundaries of ability synergy to new levels. Going down the line, there’s:

How exactly do these work together? The video below is a nice demonstration of just how strong these abilities can be when utilized to their full potential. You see, in Stormheim there are grapple points which normally require players to grapple from one point to the other in order to cross impassable gaps or cliffs. Demon Hunters laugh at the silly concept of using ropes and metal to cross gaps. Using only the abilities above, I was able to complete one of Stormheim’s toughest treks before the grappling hooks were even added in the most recent alpha build. For anyone who loves exploration, Demon Hunters will practically be a must.

Movement is only one aspect of Demon Hunters, though. For anyone who’s played a Rogue or a Monk, the Demon Hunter will feel familiar enough to be easy to pick up but different enough that it will still feel fresh. This freshness is in large part to the beautiful combat animations Blizzard has created for the class. Glaives slice against enemies in a way that feels like the weapons are an extension of Demon Hunters themselves — they glide smoothly and swiftly, moving in a way that almost feels like a dance. On top of this, the ability animations (especially something like Blade Dance) provide a specifically Demon Hunter feel that will dazzle time and time again.

Other aspects of the Demon Hunter take familiar concepts and add slight twists to them as well. Fury, their resource of choice, builds up to 100 in the same way Rage might, but it does not decay over time. While it also builds up fairly quickly, this also lends itself to a bit of a game when preparing for a bigger fight. Going in with full Fury adds a slight but noticeable edge and can grant strong burst at the start of a fight. Demon Hunter AOE is also unique in that (at least for now) there is no spammable AOE, but a decent amount of AOE abilities on cooldown. Honestly, the place this felt most noticeable was while soloing old raids — not having an on-demand AOE button to clear pesky trash mobs meant waiting for cooldowns to do so, but this was less a negative and more a unique element of the class. Unless Demon Hunters get another AOE ability, this will add a layer of trickiness to AOE pulls in raids; they’ll have to be sure to maximize cooldown usage to effectively help clear packs.

We’re still a long way from the final version of Demon Hunters, but my experience so with them so far has been nothing but positive. They’re fun in a way that even surprised me: I expected to enjoy them, but I didn’t expect to be thoroughly hooked on them so quickly. Moreover, they’re fun without actually feeling overpowered; the fun comes purely from the flavor and gameplay of the class. While there are a few downsides — it’s harder to appreciate their fluid animations at lower framerates, and latency makes jumping obstacles like this video above much more difficult — I have a feeling Demon Hunters will be more than just a flavor-of-the-month class for a significant number of players.