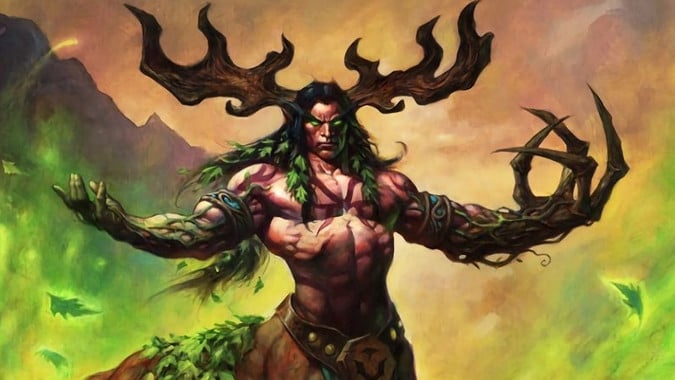 The demigod Cenarius is the son of Malorne and Elune. It is through the teachings of Cenarius that Malfurion Stormrage became a Druid,  the first on Azeroth. But who is Cenarius? The Tauren call him Forestlord, and claim him as their teacher as well, saying that they were the first Druids under his tutelage.

From him come the Dryads, Keepers of the Grove, and through his son Zaetar the Centaurs. Also kin to him — in some yet unknown way — are the Magnataur of Northrend. It was Cenarius who helped the mortal races gain the aid of the Ancients during the War of the Ancients, and in so doing helped preserve the world of Azeroth in the face of the first invasion of the Burning Legion.

Let’s look at the long life, painful death, and rebirth of Cenarius, son of the moon and the wild stag. 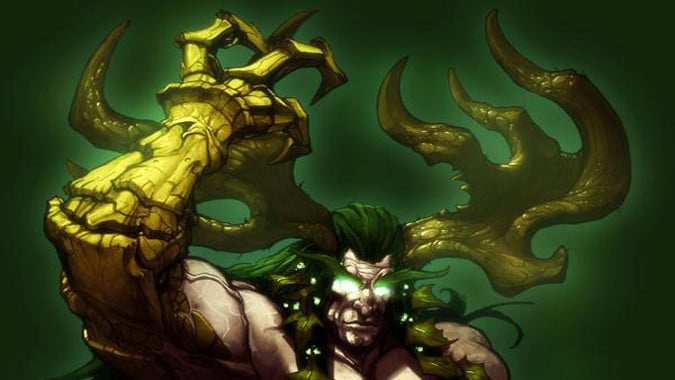 The Birth of the Forestlord

According to Tauren legend, it all began with a hunt. The white stag Apa’ro, one of the Ancients, was being hunted by the ancient Shu’halo. To escape he leapt into the sky where his great antlers caught on the stars. Seeing the white stag trapped, the moon — Mu’sha as the Tauren know her — fell in love and offered to save him if he would love her and help put an end to her loneliness. From this union was born the demigod Cenarius.

The Night Elves claim that it was Malorne who saw Elune in the sky and fell in love with her, and in his efforts to reach the moon goddess the stag grew so powerful and beautiful that he eventually reached the moon and she was so impressed that he became her consort. These are legends, not history, but we know that Cenarius certainly acknowledged Malorne and Elune as his parents. While Malorne was a demigod, Elune was not, and so Cenarius (born with his father’s mortality) could not reside with his divine mother.

Cenarius grew in the world his father embodied, the world of Azeroth’s purest and most primal natural places. Ysera, the Emerald Aspect, took an interest in the young demigod from an early age and served as a sort of foster mother to him. It was from Ysera that Cenarius learned of the Emerald Dream and the purity of nature. Whereas Malorne’s relationship with nature was a primal, unthinking thing, it was Cenarius who began to discern the deeper mysteries of nature. 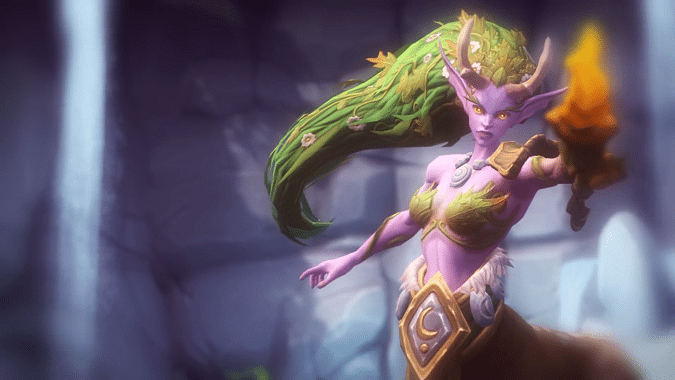 The children of Cenarius

Cenarius sired the first of both the Dryads and the Keepers of the Grove. Not all Dryads are his daughters, and not all Keepers are his sons, but the first of each came from him. It’s possible that the first Dryad was named Lunara, and we know of two Keepers who are the sons of Cenarius, Zaetar and Remulos. In turn, Remulos has sired many offspring, both Dryads and Keepers alike. Through his son Zaetar’s union with the Princess Theradras Cenarius is the ancestor to the Centaur, although most of those have inherited the chaotic nature of their mother, daughter of Therazane the Stonemother, capricious and cruel elemental lord of earth.

Yet because his mother was Elune, Cenarius sees the Night Elves as kin as well, and has long sought to guide them towards an understanding of the natural world. For many centuries before the coming of Azshara Cenarius sought to impart his wisdom to the Night Elves, and many listened, but the obsession with the arcane power of the Well of Eternity led the Kaldorei towards a society with vast cities. A society that practiced deforestation for its own ends. Saddened, Cenarius left the Night Elves to their folly, and retreated to the unspoiled wilderness on the edge of their lands.

It was there that an unlikely trio found the demigod. At the height of Kaldorei culture, as Azshara reigned as the most adored woman who’d ever lived, a young Night Elf named Malfurion Stormrage spent many years as a scholar and student of ancient texts. In those texts he found reference to a mysterious being, and convinced his brother Illidan and their childhood friend Tyrande Whisperwind to accompany him on a quest to find the demigod.  And find him they did.

Intrigued by the young night elves, Cenarius appeared to them and offered them his knowledge. What Cenarius knew of the Emerald Dream and the wild places of Azeroth was nothing short of the powers of the modern Druid, and Malfurion took to his studies with alacrity. Illidan did not, and soon grew frustrated with both Cenarius and his own brother. And Tyrande was already sworn to Elune, which was a pact Cenarius would respect (for what loyal son poaches from his mother’s servants?) and honor.

Little did any of them, even Cenarius, understand just how close to disaster they were. 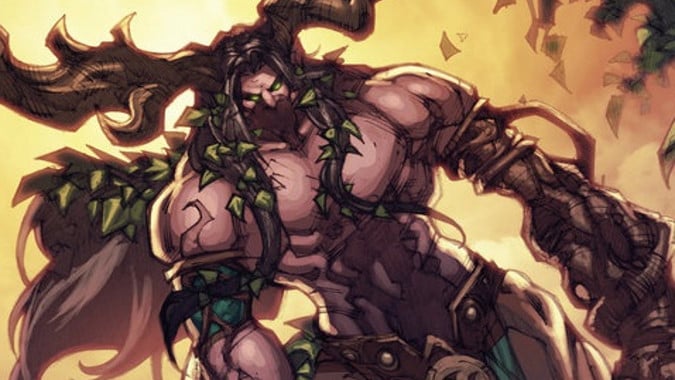 The Legion and after the War

When Malfurion had his vision of Azshara and the Highborne using the Well to destroy the world, it was Cenarius he came to, and the Forestlord was not one to doubt his student. While Malfurion tried to rally mortals to the cause, Cenarius went to his father’s people, the Ancients themselves, and after much effort managed to convince the beast gods of Azeroth to bring war against these invading demons as an allied force. Although many died in the fighting, including Cenarius’ father Malorne, in the end the Legion was defeated and the world saved, but at great cost. The destruction of the original Well of Eternity and the Sundering meant that Azeroth was forever changed.

Cenarius served as Malfurion’s advisor and mentor after the War, but no longer saw himself as Malfurion’s teacher — his student had learned everything he could teach. Cenarius helped Malfurion build the barrow prison that held Illidan Stormrage for 10,000 years. Cenarius was the one who helped Malfurion overcome the madness of the pack form, and thus influenced Shan’do Stormrage when he banned the Druids from learning it. When the Druids would enter their Long Vigil over the World Tree of Nordrassil, Cenarius aided Tyrande Whisperwind’s Sentinel army in its goals of maintaining the peace and destroying Satyrs and other demons. From his home base in the Moonglade, Cenarius watched over the deep woods for thousands of years.

Then came the Orcs. 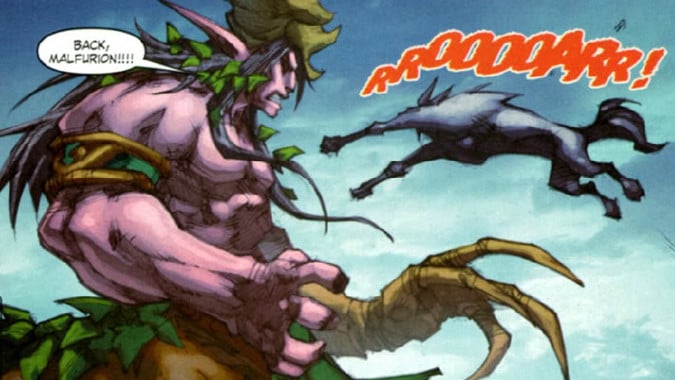 Some ten thousand years after his father Malorne died at the hands of Archimonde, a new force appeared in the forests that Cenarius so loved. These ‘Orcs’ reeked of the demonic magics of the Burning Legion and they attacked the forest, destroying trees wholesale without regard for the inhabitants. The Sentinels fought fiercely against them, and when Cenarius added his might to theirs they were all but invincible. Remembering the destruction the Legion wrought, Cenarius displayed his full ferocity in these encounters.

The Orcs sought, and found, a weapon to use against the Night Elves and Cenarius — a fountain tainted with the Blood of Mannoroth, the same demon whose blood had damned them to slavery to the Legion. The leader of the Orcs, a warrior named Grom Hellscream, drank the blood and became even more corrupted than before, and met Cenarius again in battle.

Hellscream untainted would have stood no chance against a demigod. Hellscream as a Chaos Orc, with the entire corrupted Warsong Clan at his back, managed to do the unthinkable and struck down Cenarius even as his father Malorne had been struck down.

This wasn’t the end for Cenarius, though. As a demigod, son of an Ancient and Elune herself, he proved difficult to permanently slay. When the forces of the corrupted Aspect Deathwing threatened to shatter Azeroth, Malfurion managed to reach out to the spirit of the demigod in its resting place in the Emerald Dream, and brought Cenarius forth to Azeroth to give battle against the servants of the Destroyer. 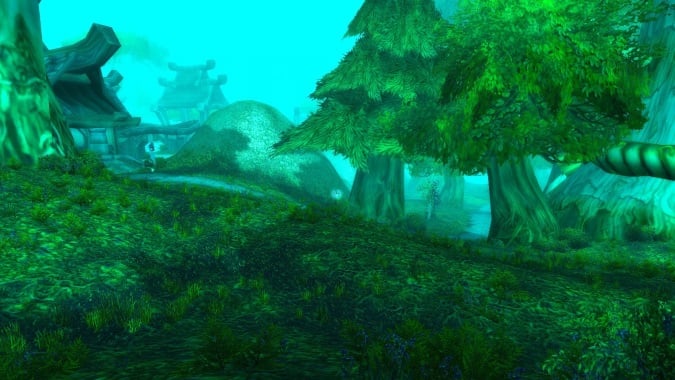 While Cenarius himself had come to view the Orcs as potential allies against the Legion, the fact that Grom Hellscream murdered Cenarius meant that many Night Elves will never accept Orcs as allies. It doesn’t help that the Orcs have continued logging in Night Elf lands.

The fact that Cenarius has fathered so many children, many of who themselves went forth and reproduced as well, combined with his teaching of the Druids means that Cenarius has had a far reaching impact on the world as a whole. It was Cenarius who ultimately got the Ancients to stand against the Legion, and it was Cenarius who led the charge that ultimately balked the Legion long enough for the dragons to intervene. It was also Cenarius who gave Broxigar the axe the Orc used to wound Sargeras, and as a result the Titan could not enter Azeroth before Malfurion destroyed the Well of Eternity and closed the portal the demons were using to invade during the War of the Ancients.

Without Cenarius, not only would there be no Cenarion Circle (it’s named after him for a reason) but no Moonglade, no Keeper Remulous, and likely no Azeroth at all.

Cenarius plays a role in Legion, but we won’t be discussing that today — a KYL discussing the events of Val’Sharah, Cenarius’ ancient refuge and the birthplace of Druidism, is coming.