Overwatch beta is back online with all new content [Updated] 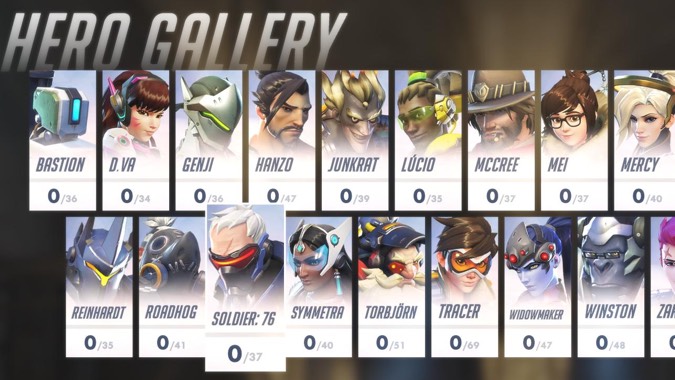 It’s official, the Overwatch beta has returned! The beta has come back online with a brand new patch featuring a new progression system, two new maps, a new game mode, balance updates, new progression skins, and private game updates. Our favorite Overwatch update? Definitely the patch note “Jeff Kaplan’s beard progression has been reset” — and indeed it has, as you can see clean-shaven Kaplan in the latest developer update video.

For those hoping for beta access, we are still in closed beta and the Overwatch team currently has no dates for the next Beta Test Weekend, when more players will be invited into the game. In the meanwhile, make sure your account is opted in for beta access for a chance to get it.

Check out all the details, including today’s patch notes and a new developer update video under the break.

New Game Mode: Control
In this update, we’re introducing a brand new game mode: Control. On Control maps, two teams fight over a series of objective areas in a best-of-three format. When a team is in control of the round’s objective area, they will make progress toward capturing it, and whichever team gets to 100% first wins the round. Each round (up to 3 total) will feature a new objective area located in a different part of the map.

New Control Map: Lijiang Tower
Lijiang Tower was built in the heart of a modern Chinese metropolis, its busy streets lined with stores, gardens, restaurants, and famous night markets, where foods from around the region are available at all hours. The tower itself is home to one of the leading companies in China’s state-of-the-art space industry, Lucheng Interstellar, an organization with a long pioneering history that is currently pushing the boundaries of space exploration.

New Control Map: Nepal
Years ago, a group of omnic robots experienced what they described as a spiritual awakening. They abandoned their preprogrammed lives to establish a monastery high in the Himalayas of Nepal, where like-minded omnics could gather to meditate on the nature of their existence. Led by their spiritual leader, Tekhartha Mondatta, they took over the ruins of an ancient monastery and turned it into the home of the Shambali, a place where omnics and humans alike make pilgrimages in the hopes of finding a greater truth.

New Play Mode: Play vs. AI
No interest in playing against humans? No problem! Players can now team up and battle against A.I.-controlled characters in our new, aptly named mode: Play vs A.I.

New Feature: Player Progression
While we strongly believe that playing Overwatch should feel exciting and rewarding on its own, we also know how fun it can be to work toward long-term goals. To this end, and as a way to thank you for your time invested, we’ve added a brand new progression system to the game.

Progression in Overwatch is built around earning earning experience and leveling up your account. Moving forward, you will now gain experience by completing Quick Play and Play vs. A.I. games. Earn enough experience, and you’ll level up. Level up and you’ll receive a Loot Box! 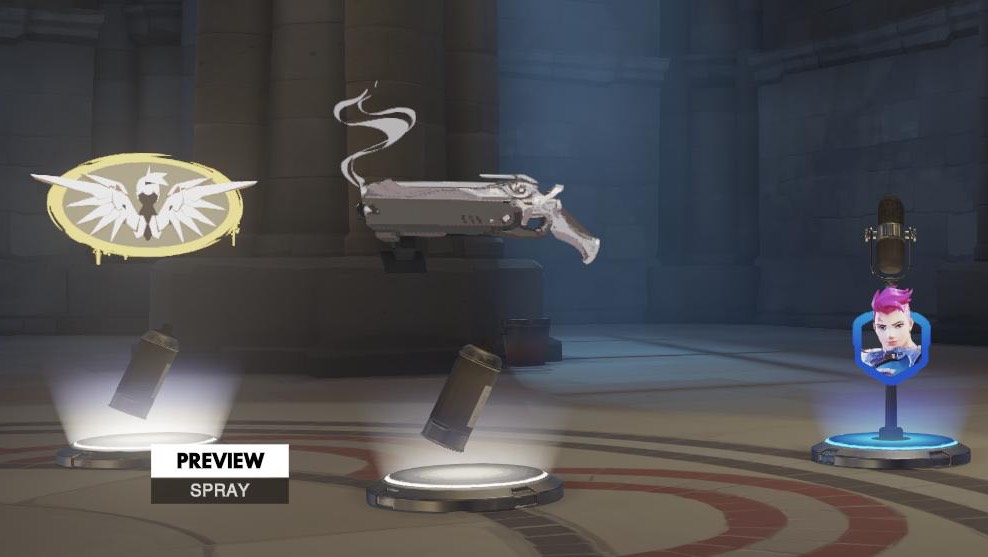 Loot Boxes contain a random selection of items that can be used to customize the look of your hero and express yourself in-game, including skins, animations, emotes, custom dialogue options, sprays, and more. In addition to collecting these items from Loot Boxes, players can also unlock them by spending a new in-game currency called credits.

Players can customize their heroes, view items they’ve unlocked, and spend credits to unlock new items in the Hero Gallery.

Developer comments: While we love the way that Bastion can turn the tide of battle, the hero felt too powerful against less experienced players and too weak against more experienced players. The goal of these changes is to make Bastion more viable at all skill levels, as well as provide more flexibility in how the hero can be played and supported by a team.

Developer comments: Previously, D.Va could become a problem when there were multiple people playing her in a game, especially when they were crowded around a small capture point or escort objective. Between the size of her Defense Matrix and the fact that her destroyed mech could be used to block line of sight, she was often simply too difficult to kill. These changes are designed to reduce her overall defensive footprint and give players more ways to counter her.

Developer comments: These quality-of-life changes are intended to make some of Hanzo’s abilities work a little more intuitively.

Developer comments: Mercy is a very strong support hero with a very strong Ultimate, so it’s no surprise that many teams consider her mandatory. We don’t want any hero—or any hero ability—to feel like an “auto pick.” Our goal with these changes is to tone down Resurrect by allowing opponents to counter it, but still make sure it can feel game-changing.

Developer comments: Players discovered a way to make Pharah hover indefinitely across some surfaces. While we initially allowed this neat trick to persist, it ultimately proved detrimental to map balance, so it needed to go.

Developer comments: Ideally, players should be using Earthshatter as a setup move for their team. However, this ability was doing so much damage that Reinhardt could use it as a setup and finishing move, eliminating multiple enemy heroes without much assistance. These changes are intended to bring Earthshatter more in line with other heroes’ Ultimates, while still allowing Reinhardt to be the big playmaker he has been.

Developer comments: It’s always been intended that, after successfully hooking a target, Roadhog would have a chance to act before his target recovered; however, there were some situations in which this wasn’t happening, particularly at higher latencies. We’ve slightly increased the stun duration following Chain Hook to compensate.

Developer comments: These changes are aimed at making Soldier:76’s weapon feel better when firing, as well as provide more experienced players the opportunity to gain accuracy at longer ranges (via burst-firing). To ensure that Soldier: 76 doesn’t become too powerful as sniper, however, we also added some long-range damage falloff to compensate.

Developer comments: These changes have two primary goals. First, we want it to be easier for Symmetra to get her first Teleporter up. Second, we want to eliminate those frustrating situations where Symmetra is able to immediately deploy another Teleporter as soon as it’s found and destroyed by an enemy team.