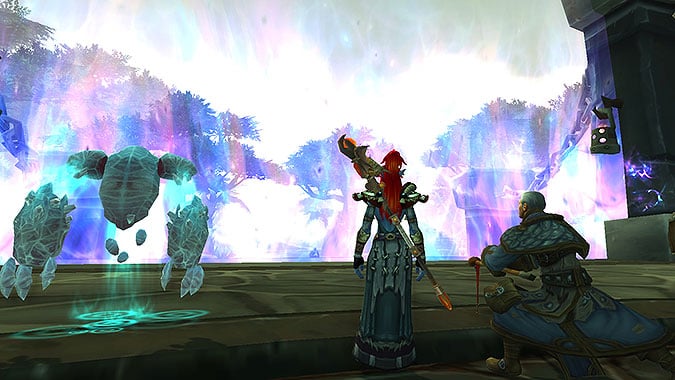 Just over a year ago when I chose the name for Arcane Sanctum, I chose it with a few things in mind. I wanted a clear demarcation that the column was new, just as the site itself was new. But I also liked the feeling of the word Sanctum: a place for Mages to talk with each other and honestly share their love for this class. As a group, the Mages that congregate at Blizzard Watch haven’t disappointed. You’re nearly universally civil, helpful to each other and eager to discuss important Mage business such as fashion, cakes and making corpses of your enemies. You all make me proud, and I’m happy to have celebrated a year with Blizzard Watch!

When we started the column, though, we didn’t know that Legion would be bringing us an actual arcane sanctum of our very own in the form of the Hall of the Guardians. Rather than being off by ourselves in our garrisons, this will be a space shared between Mages of all factions. Although many of us can’t yet explore it on the alpha, you can still see it for yourself in videos that are available in order to get a sense of the space. So far, I like what I’ve seen. The overall design scheme is Mage appropriate, it has more library space than you can shake a staff at. It’s only going to get better as more personal, finishing touches are added over the coming months. But there’s another important aspect of the hall that is fairly sparse right now: which champion NPC Mages can we expect to see in it? Please note that there will be spoilers for Legion plot points in this column, including specifics about some aspects of Felo’melorn’s quest.

Champions are Legion’s answer to the follower system of Warlords of Draenor. There will be fewer champions, and they will be much more prominent lore figures. Their missions will be more integrated into the world and require player participation rather than just interaction with a mission board. Back in November, some of these initial champions were datamined. These are the champions that are confirmed so far. The list looks a bit lackluster when you compare it to some of the confirmed followers for other classes like Lady Liadrin, Vanessa VanCleef, Thassarian. I hope we see some more exciting Mage representation for our champions. 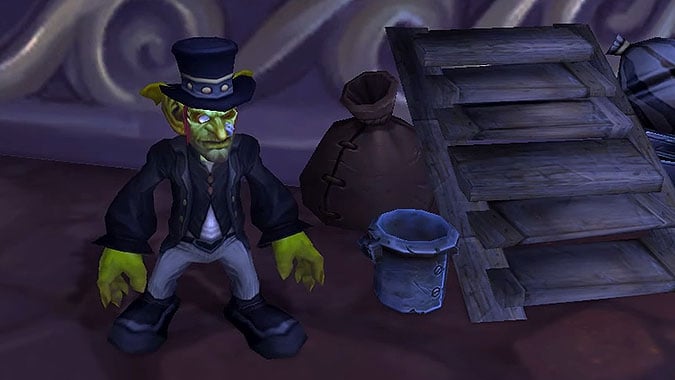 Although not at all a previously existing lore character, The Great Akazamzarak is a goblin street performer who uses a mastery of portals to pull rabbits out of hats to entertain onlookers in Dalaran. You recruit him to teach you how to make portals to the Hall of the Guardian, he becomes your follower after you give him an especially sizable tip. 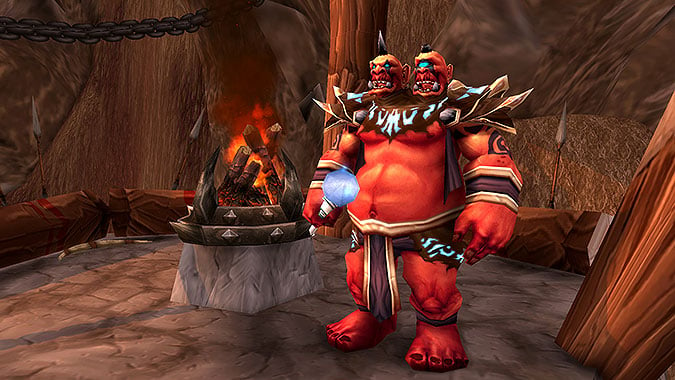 It’s great to see Mog’dorg the Wizened in action again, after all, the Ogri’la ogre civilization are Mages too and anyone from Draenor has legitimate cause to oppose the Legion however possible. Mog’dorg actually made an appearance during Cataclysm where he would sometimes join players at the Molten Front during the quest The Protectors of Hyjal. I’m glad that our ogre friends haven’t forgotten us!

For this next champion, we only have the datamined information. He’s apparently a dragon whelp (I’m guessing blue flight) but still a powerful mage in his own right. We don’t know anything else about him yet, but dragon characters can be interesting and Wrathion is a whelp too, after all.

Now here’s the part where we can let our fancy take flight — what Mages have you known throughout the world of Azeroth (and beyond) that you’d like to have by your side as we face the Burning Legion? These are going to be some of mine, but there are bound to be many more. The general criteria is that they should be a fairly powerful Mage, but judging from the currently known Mages they don’t need to be major lore figures, necessarily. Which doesn’t mean we couldn’t have major lore figures, either!

Having played a fairly pivotal role in the events of Warlords of Draenor, it doesn’t seem likely that Khadgar would just step aside to allow things to unfold in the battle against the Legion. But it could be that he’s just too important in his current role as de facto leader of the Kirin Tor to involve himself directly in the Tirisgarde.

This is a tricky one, as information has been sparse regarding Jaina’s whereabouts. Either she or Khadgar would’ve been an obvious choice as a Mage champion previously. But little is known regarding where she is, or even exactly why she would leave the Kirin Tor and put Khadgar in charge after he made her the leader in the first place. I’d like to know more and be assured that we’ll see her in Legion. Right now, it seems pretty unlikely that she’ll be a Mage champion but I wanted to mention her regardless. 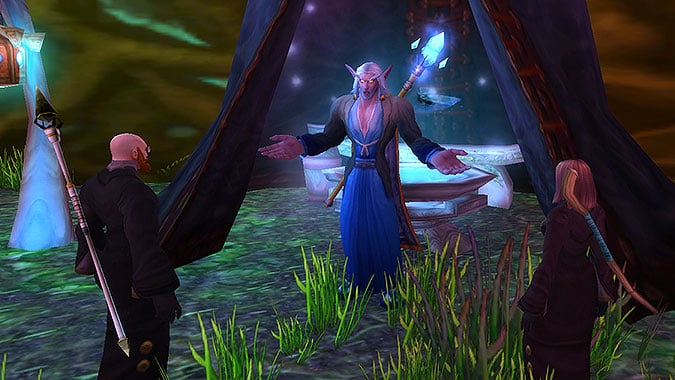 Not much is known about the leader of the Highborne that have reintegrated themselves into Night Elf society. When Night Elf Mages were first made available, Mordent was waiting interminably in the Temple of the Moon for an audience with Tyrande. He’d be a really interesting addition to the Mage champions, considering the Highborne history and the fact that we’re facing off against not only the Legion itself but also Legion-aligned Highborne. 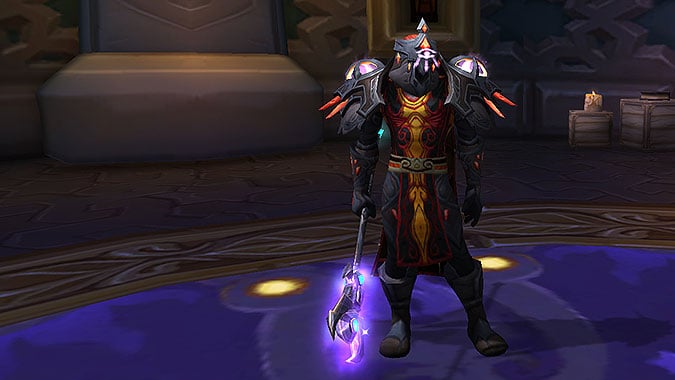 In case you’d forgotten about Aethas Sunreaver, here’s a quick summary to get you up to speed: He was banished from Dalaran along with the other Sunreavers after the events in Mists of Pandaria surrounding the Divine Bell. He managed to escape from the Violet Hold with the help of Rommath but he was not welcome in the city and also lost his position on the Council of Six. So you might think I am going out on a limb to suggest that he’s a possible Mage champion option in Legion. However, due to his aid during the recovery of Felo’melorn, at the conclusion of that quest he is pardoned and allowed to return to Dalaran. So there’s really no reason why he couldn’t join forces with you, Felo’melorn’s (possible) bearer. The Council of Six agrees to “grant his request” and allow him to rejoin the Kirin Tor, so perhaps he’ll be looking to redeem himself in their eyes by lending his aid to oppose the Legion. 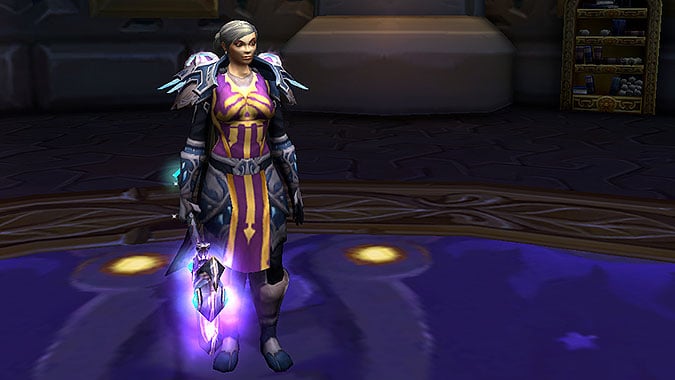 Another member of the Council of Six, we’ve encountered Archmage Modera as players many times over various expansions. She played a major role in the Alliance side of the Throne of Thunder/Kirin Tor Offensive quests. We don’t know much about her background apart from her participation in-game, but she’s also friends with Aethas Sunreaver and pushed for the pardon that allowed him back into Dalaran. She’d make a great Mage champion if she isn’t too busy with her Kirin Tor duties, just like any member of the Council of Six, really. 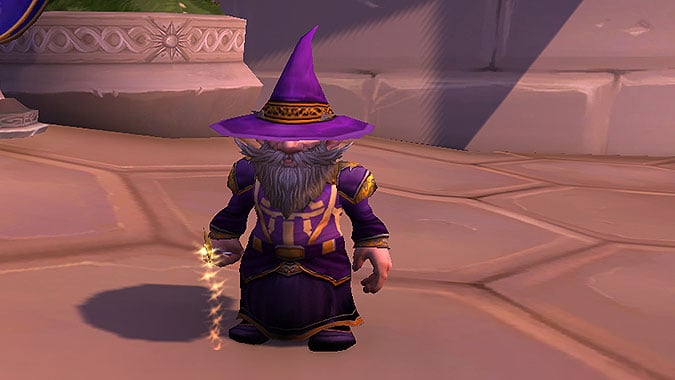 Although we don’t know much Windle’s Mage pedigree, but he’s a character of personal significance to many Mages. He’s the gnome who walks through Dalaran’s streets at 9:00 pm server time and lights each of the lanterns. He also sells Windle’s Lighter so that you can help him out in his task. If you’ve read Jaina Proudmoore: Tides of War you’ll know that he and his wife Jaxi Sparkshine suffered a tragic loss. Maybe helping to fight back against the Legion could help him regain some of his spark. 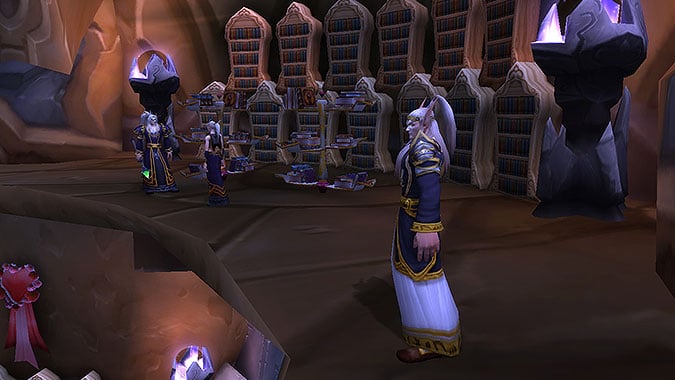 Hey, if Mog’dorg the Wizened has traveled from Outland (“our” Draenor, if you prefer) there’s no reason why the leader of the Scryers faction couldn’t come to Azeroth to help combat the Legion. Having already devoted their considerable resources to efforts in Draenor, the Scryers would be natural allies to join the Tirisgarde as we face off against a demon army once again. I’m not saying it’s going to happen, but it would definitely be a natural fit!

These are a few of the prominent and notable Mages I’d like to see available as champions in Legion, but I’m sure you have your own. No Mage is too insignificant or too grand for consideration. In particular, I didn’t include any “portal trainer” or “mage trainer” NPCs without backstory, but there’s no reason some of them couldn’t be expanded upon. It’d be great to see a mix of cross-faction races and people, considering Mage is one of the most accessible classes across Azeroth. It’s not that I’m unprepared to warm to new folks like Akazamzarak and Zeros, but one of the best things about the follower/champion system is being able to interact with beloved characters again. There are lots of Mages to choose from in the world, and I hope we end up with a nice variety of them.