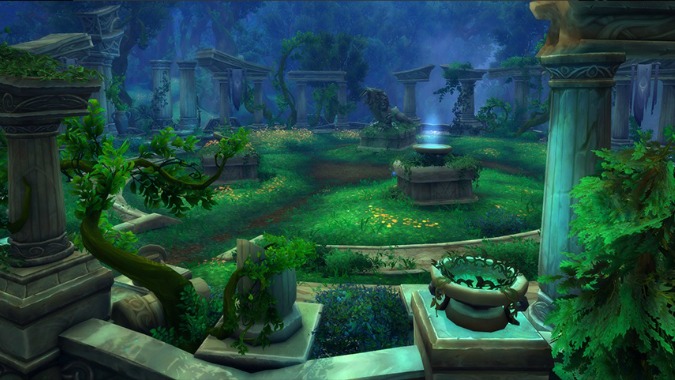 We don’t know much so far about the new Legion PVP Arena  maps. Back in December Blizzard released a small preview of two Arena maps, Black Rook Hold and an unnamed map in the forests of Val’sharah. And by small I mean two images and a vague description of the mechanics. Now we have another small peek at another PVP arena map, Ashamane’s Fall.

Hey, Gladiators! Here's an early preview of another new map coming to the Arena in #Legion: Ashamane's Fall. pic.twitter.com/mcMKxi1iMR

All we have of Ashamane’s Fall are these three images, unfortunately. No word on the mechanics involved though it looks like this central island will be the main chokepoint where the action will be going down.

Hopefully soon Blizzard will be releasing more in-depth spotlights on the new Legion PVP Arena maps. Until then, alpha players can enjoy the PVP free-for-all that is the Dalaran Underbelly.

Blizzard Watch is made possible by people like you.
Please consider supporting our Patreon!
Filed Under: Arena Map, Ashamanes Fall, Legion, Pvp
Advertisement