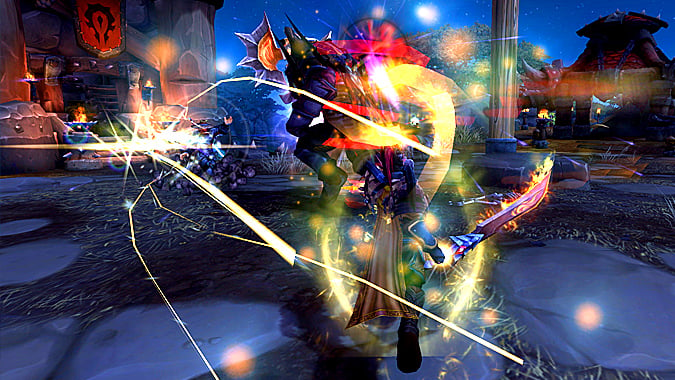 Despite the major changes incoming, PVP seems to be flying under the radar in the Legion beta, but that seems to always be the case. Regardless, developer Brian Holinka published a Dev Watercooler dedicated to PVP today — gearing for PVP, to be specific.

The Dev Watercooler starts with a general recap of how gear has historically worked in PVP, running through Versatility, PVP Power, and the endless battle of item levels. The developers want the gearing process to stick around in PVP to maintain the feeling of character progression — but abiding by the PVE standards of item levels threw PVP for a loop. Instead, in Legion, item level will be considered differently in PVP than PVE. As Holinka explains:

Originally Posted by Brian Holinka (Official Post)
We ultimately arrived at a solution where we set player stats automatically in PvP and increase those stats based on your average item level. Players would understand that their stats didn’t come from gear, but that the quality of their gear does matter. Currently, we’ve tuned the system such that for every point above item level 800, your stats are increased by 0.1%. This means that someone with item level 900 gear is only 10% stronger than someone with item level 800 gear. For comparison, that’s roughly the same increase that a mere 10 item level increase gives in Warlords of Draenor. This allows us to make getting gear feel good in general, while shrinking the power gap to an acceptable range.

However, with this change comes a decidedly more PVE method of gearing. Legion PVP gear will no longer come from currencies and vendors. Instead, PVPers get their very own dose of gearing RNG.

Originally Posted by Brian Holinka (Official Post)
Now that we’ve limited the power gap gear can create in PvP, we can offer great gear rewards on par with the rest of the game—but now we need to address how it’s rewarded. One of the big changes in Legion is that gear will no longer be delivered through PvP currencies and vendors. Of course, we know a lot of players like the predictable nature of buying gear from vendors. They can select exactly the item they want and never receive an item they don’t want. It sounds like a perfect situation, but it is also an emotionally flat, predictable experience. There is no anticipation about what your reward will be. No exhilaration when you get something you want. No disappointment when you get something you don’t. We want to bring that emotional experience to PvP rewards—while still doing our best to minimize the amount of disappointment you experience.

In Legion, when players win a Battleground, Skirmish, Arena, or Rated Battleground, they have a chance to receive a piece of gear directly. Furthermore, your first few victories per week in each rated bracket will reward a guaranteed piece of gear, which has its item level increased based on your rating in the bracket. For both systems, gear works like it does in the rest of Legion. Any time you are awarded gear, it has a chance to have its item level increased further.

For the full rundown, head over to the watercooler. For you PVPers out there, this is one you shouldn’t miss.