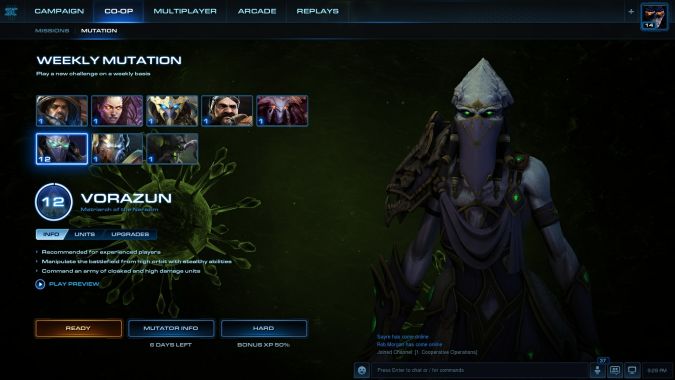 One of the things I’ve come to realize about StarCraft 2 lately is that Blizzard — outside of the occasional side-stories — seems to be putting the game’s future primarily in the hands of its co-op mode. For example, the most recent two patches have all been about adding more to co-op (well, and emoji but don’t mention that to Liz). Abathur as a playable commander, weekly mutations (think, Tavern Brawls), a new progression system, and even a new map have all been added recently. And yet, despite all these additions, I really only ever have the chance to play co-op with one other person.

Maybe it’s a case of too little, too late or maybe Blizzard just isn’t advertising the changes very well. Regardless, it’s quite a shame, because the game mode is very fun. Personally, I’m still working my way through the Vorazun hero because I love Protoss and can’t really get the hang of the other commanders. But even focusing on only one hero, the weekly mutations manage to change the game enough to where it draws my attention each week. Were I to focus on more heroes, I’d technically have enough content (albeit slightly grindy content) to last me more than an expansion’s worth of time.

So, as the title suggests, I’m curious why more people aren’t playing (or even talking about) StarCraft 2’s co-op mode. Is it not broadcast enough and this is the first time you’re aware of all the changes? Is it like a certain club you’re not supposed to talk about? Or does it just not interest you? I’m especially curious to hear from players who have played through the campaign!

Blizzard Watch is made possible by people like you.
Please consider supporting our Patreon!
Filed Under: Abathur, Mutations, Starcraft 2, Starcraft 2 Coop
Advertisement