A guide to transmogrification in Legion 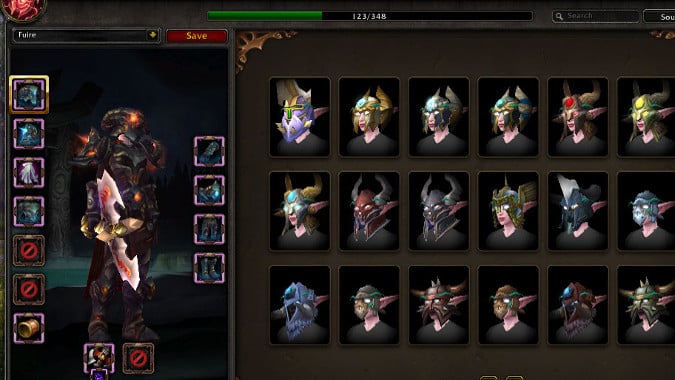 The Wardrobe is will be here on July 19 when patch 7.0 launches. Really, all the other changes in patch 7.0 are nice — new talents, class changes, the pre-Legion invasion event — but for me, the freedom from clutter in my bags is going to be wondrous. I’ll go from playing with maybe six slots free if I’m lucky (ha, six slots, who am I kidding) to entire bags free. It’s a magical feeling, this anticipation of free bag space.

But how will the Wardrobe work, exactly? What will be in it? What won’t be in it? Let’s discuss the system and how you’ll make use of it in patch 7.0.

This preview video from Blizzard will give you a basic rundown of the system — and now let’s jump into the details of how transmog will work with the Wardrobe.

The Appearance tab and your collection

Let’s make one thing clear: you still need to go to a transmog vendor to actually change your gear’s appearance, and it still costs gold. The vendors in Orgrimmar, Stormwind, the Shrines in Pandaria and the Horde/Alliance capitals on Ashran, and the Grand Expedition Yak are all still necessary if you want to actually transmog your gear.

However, if you want to see what appearances you’ve collected, you don’t need a vendor — you can simply go to the Appearances tab in your Collections pane and peruse your look to your heart’s content. 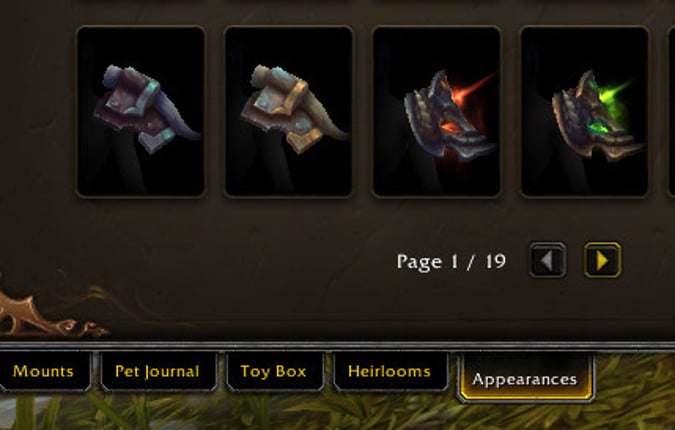 The Appearance tab, as you can see above, is at the far right of the Collections pane. It’s the same window you use to look at your mounts, your pets, your toys, and your heirlooms. It can be filtered to show every piece in your collection, every piece you’ve yet to collect, or both. It has a wide range of other potential filters as well. Say you want to see if you’ve collected a particular item that comes from a certain profession — that’s not a problem with the Wardrobe’s filtering. 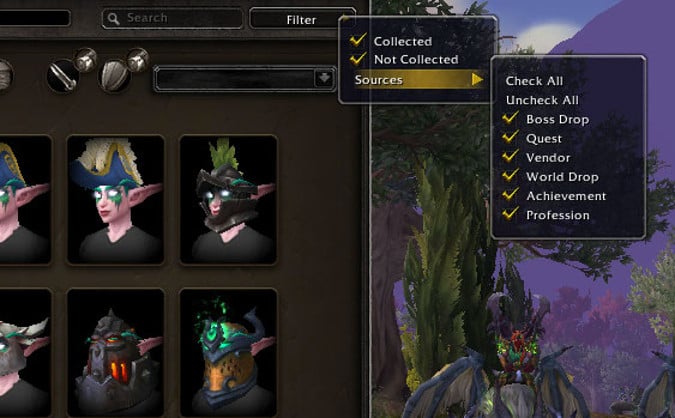 You can look at pieces that only come from bosses, quest items, vendor purchases, random world drops, and items gained via Achievements and Professions, allowing you a fair amount of granularity to your searches. It’s a flexible system that lets you search for items by name within their category as well, so if you were curious as to whether or not you’d unlocked the appearance of a specific item (say The Phantom Blade, a 1-hand crafted sword) you’d go to One Handed Swords under Main Hand, and simply type ‘Phantom Blade’ into the search box.

What do you have in there?

What items should be in your collection? Well, for starters, anything in your bags, your bank, or your void storage will be there. On top of that, you’ll have anything from any quest you’ve completed, even items you’ve disenchanted/vendored/otherwise gotten rid of. Boss drops you’ve destroyed will not be there, however, so if you have a hat you love the look of but have no use for aside from transmog and it drops from a dungeon, raid, or world boss, do not destroy it until after the Wardrobe is in place. This goes for vendor items as well: all that PVP gear you’re holding onto, definitely keep it until after the Wardrobe goes live.

Similarly, any green gear you have on a bank alt or whatever needs to be bound to a character before it will be added to the collection. Not just greens, either: this goes for any Bind on Equip item you have. However, Bind to Account items like the Garrosh Hellscream heirlooms will be added. You don’t even need to have them in your inventory, they merely need to be in your Heirloom tab.

As cool as this is, it doesn’t let you actually use any of that gear. No, to do that, as we said before, you’ll need a transmog vendor or mount. But once you have those, you have a wide variety of options. 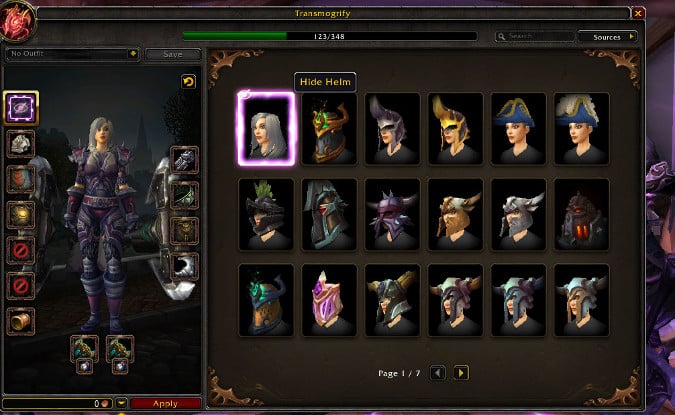 For starters, you can outright hide your helm, shoulders and cloak. The option is the first one on the top left of the pane when you use the transmog vendor, as seen above. You don’t have to turn them off, but you can. If you’re used to the current system where helms and cloaks are an option in settings, that’s no longer the case — along with shoulders, you can only turn off their appearances at a transmog vendor.

A brief warning — if you buy an item from a vendor and it’s a BOP item, it will be immediately added to your transmog collection, but if you sell it back to the vendor within the two hour complete refund time window, it will be removed from your collection. If you plan on buying a bunch of gear and then selling it, wait for it to no longer be a refund.

I have at least one quest item from the Blood Elf starting zone — the Sin’dorei Warblade — and it’s available for all my characters, Horde or Alliance, that can use 2-handed weapons. Mike Eng tells me that we can say the same for Horde characters and Alliance-only quest rewards.

Also, unlike the Appearance tab, the transmog vendor will not show you appearances you’re not actually able to use. So if you’re on your Death Knight and you’re searching for the Onslaught Battlegear, don’t bother: only your Warrior can use it. If you lack the ability to use an appearance due to level, faction, or any other restriction it simply isn’t visible in the transmog interface. Again, Mike Eng pointed out that if you have multiple items available with the same appearance, the transmog vendor will allow you to select which one you use as the source of your transmog. Yes, this is in the case of completely identical items, not recolors — those get their own slot on the vendor.

You can transmog everything we do now: helms, shoulders, cloaks, chestplates, bracers, gloves, belts, leggings, boots, main and off hand weapons, as well as Shirts and Tabards. You can also put visual effects from weapon enchants on your weapons as well. 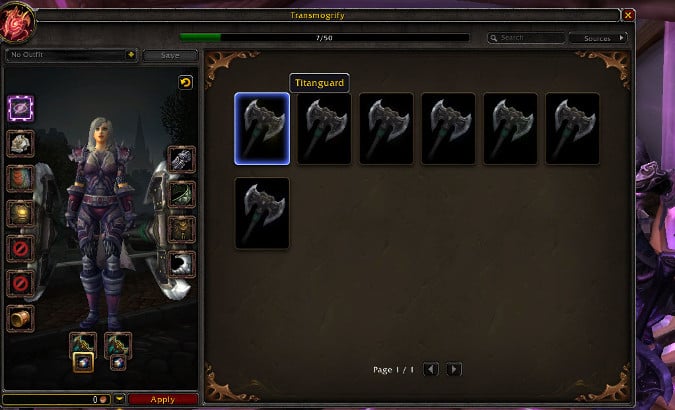 That’s all good, but the real treasure of the system is that it can save outfits, something you previously needed an addon to do. Item sets also aren’t static: the system can exclude items that aren’t equipped when you’re applying a look which lets you use the same look classes or specs that may not use the same weapons. As an example, you can use the same transmog on your Fury or Protection Warrior as your Arms Warrior even if you’re using different weapon types. So if you have a favorite Fire Mage set — which uses a staff — and you want to use it on your Arcane Mage — which is rocking a sword — you can exclude the weapon entirely and the set won’t apply it, but will change the rest of your gear. 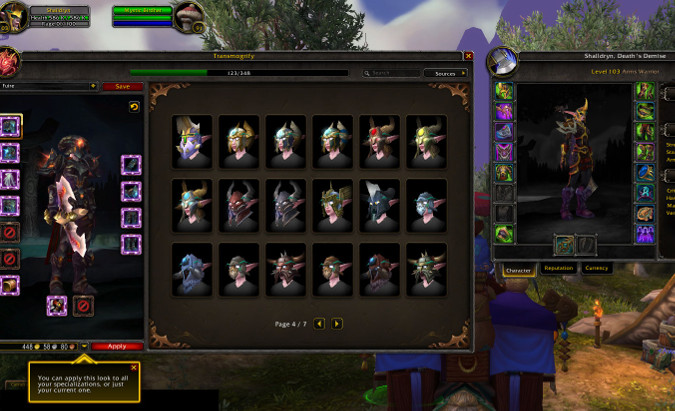 Here we have an Arms Warrior with completely unmodified gear about to apply a saved appearance set. This is actually a set I made for Fury — you can see how the offhand weapon is crossed out, it won’t try and apply that look. 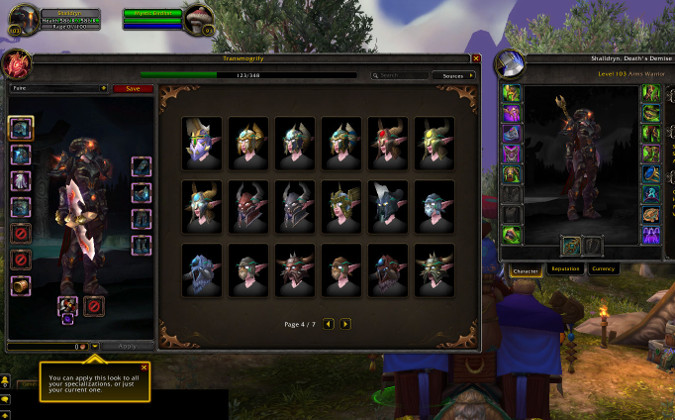 Here is the appearance after it’s been applied. It all goes on at once and the appearance is saved as soon as you create it in the transmog window, it can even be edited on the fly and then the changes can be saved if you want, or they can just be one time alterations (say you want a different weapon but the same armor appearance, you can do that all at once, you don’t need to apply the set and then go back and change out the weapon).

Overall, if it just meant that I could clear out my bags I’d love the new Wardrobe system to death. But the flexibility it gives you to search your collection, plan and save individual looks, and apply them with a minimum of effort makes this the best change the system has seen since it was implemented. Have fun and happy hunting for that one dagger you just never got.

Blizzard Watch is made possible by people like you.
Please consider supporting our Patreon!
Filed Under: Legion, Patch 7.0, Transmog, Transmogrification, Vendor, Wardrobe
Advertisement