The Queue: Let me ask you something 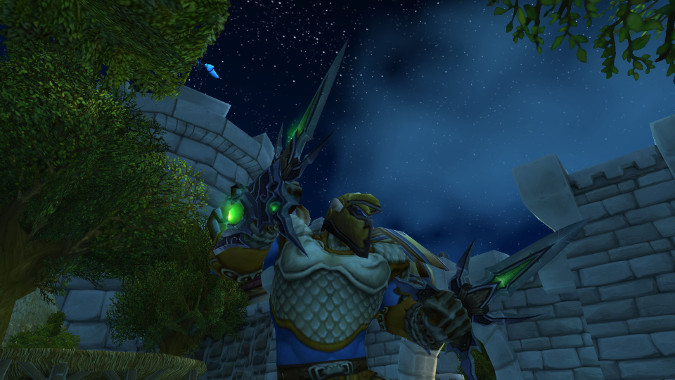 Okay, so this is a bit of a departure for The Queue, but I’m really curious about some things and I figured I could ask here. Y’all are of course free to ignore me, but:

I spent my level 100 boost on my Shaman because I missed playing him, and I always liked Enhancement. And I think it’s an interesting new design they’ve gone with, and Maelstrom as a mechanic has potential to be fun. But even now that he’s in ilevel 660+ gear he just explodes when I get adds. Like, one or two adds, and I’m down to half health. Even with spamming heals on myself it’s brutal. Is anyone out there playing Enhance and feeling like it’s just a tissue paper spec? None of my other characters had this hard a time in Tanaan.

This is the Queue. I asked you a querstion, and now I answer some of yours. Fair’s fair.

I just realized that the fel may be a corrupted piece of the Green Flame, a damaged Oan power ring that had a sentience of its own.

The Green Flame was never an Oan Power Ring.

It was the Starheart, the coalesced magic of the Empire of Tears after the Guardians of the universe went to war with magic itself. After they defeated the Empire, they collected all of their magical energies in the Starheart and placed it inside a star to hide it from the cosmos, but within that star the Starheart grew in pussiance and grew sapient, eventually transforming itself into The Green Flame of Life.

If you read my novel Nameless you’d see that I’m a huge Green Lantern nerd. Anyway, the Fel does have some similarities to the Fel – it too brings death and power, but unlike the Fel it also brings life. The Fel only taints life. (I know what happened in the Warcraft movie. The Fel in the movie is more like the Starheart than the in-game Fel.) Although there are Healthstones to consider, I suppose.

Q4TQ: So my new Warrior hit level 10 yesterday, and I was happy to find that as a Fury Warrior I could always be mashing buttons (FURIOUS SLASH ALL THE THINGS!). So I guess my question is: are there any other melee specs where you never have to wait to hit a button?

Wait till you hit higher levels and you’re hitting Rampage. Oh God I love Rampage so, so much.

Anyway, for all that I feel like I’m dipped in honey on the Enhancement Shaman, it does feel a lot like I’m always hitting my Maelstrom builders and then switching to my Malestrom spenders — I don’t do much standing around, I’m always hitting something.

Similarly, both Frost and Blood DK feel fairly active as well. The nature of Runes means that there’s a bit more of a lull, but it’s still rare that I have literally nothing to hit.

Haven’t played anything else melee yet, not even Survival on my Hunter — I just like the Beast Mastery feel too much. If I could DW Katana on my Hunter, maybe I’d change my mind.

Is it just me or is this the “buggiest” pre-patch yet? I’ve had quite a few random disconnects along with the rest of a party in random dungeons, certain low-level quests are bugged, the pets as mentioned in the queue, the map of sunken temple is non existent, mobs evade attacks when attacking right after my warriors charge. This is what I’ve noticed so far. It feels much more buggy as usual.

I still remember the pre-Cataclysm patch where we zoned into the Ruby Sanctum and nothing was in there, then our whole raid got disconnected and when we zoned back in we were in Razor Hill. We were Alliance. So we decided to go kill Onyxia instead.

What I’m saying is, it’s going to take a lot of bugs for me to agree this is the buggiest pre-patch ever. It’s pretty buggy though.

Spent some time soloing Old Raids, and I have learnt two things

All Warriors needs some form of viable Self Heal

Talent swapping is an arse and a half, damn Rested XP areas

This is what I’ve been saying. Thankfully all my level 100 Warriors are Draenei so I have Gift of the Naaru, because if I didn’t some fights would be nearly impossible. Chimaeron and Maloriak were both hairy as Fury with the Bloodthirst heal your only recourse. My suggestion is to save Enraged Regeneration and use it just BEFORE Chimaeron takes you down to 1 health.

I blew all my apexis on upgrade tokens for the hunter I decided to roll and boost because I wanted to try Survival out, since I’m more a melee guy.

Then I found out I had to be BM to tame and use devilsaurs, so…learning how to pew pew!

Why did nobody tell me this?

I’ll be right back, I have to tame like six Devilsaurs.

Okay, that’s the Queue for today. I haven’t done a book plug in a while, and I’m not going to do one now, either. If you feel like helping a dude out (I won’t go into details, I know it bums some people out when I complain about my health) then you can find the link to it on the site. Take care and have a good day, Alex is back tomorrow so ask him why no one told me about Hunters taming devilsaurs.

Blizzard Watch is made possible by people like you.
Please consider supporting our Patreon!
Filed Under: Enhancement Shaman, Leveling, Pre-Patch, Weak
Advertisement