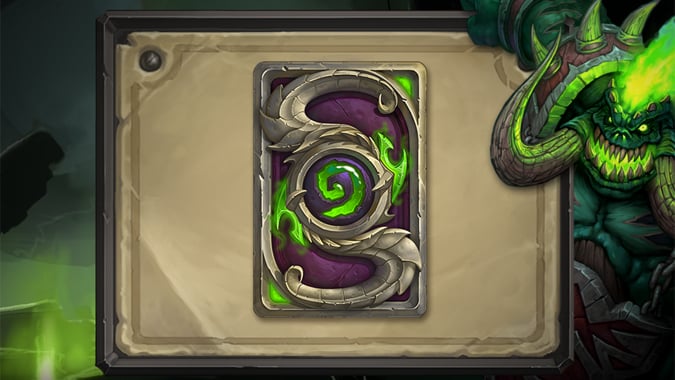 Hearthstone’s September card back has been announced! The Burning Legion’s reach knows no bounds when it comes to time, space, or game titles, and has extended to this month’s rewards in a lovely Legion-themed card back for your collection. The purple and fel green card back is the perfect way to showcase your love of Blizzard’s newest Warcraft expansion along with your love for Hearthstone. But you don’t need Legion to earn this prize — you just need to hit Rank 20 before the month is over.

You can earn Rank 20 in either Standard or Wild mode — your highest earned rank in either one will count for the card back. As for hitting Rank 20, it isn’t all that difficult to do. Just play the game, earn your stars, and progress up the ranks. You won’t lose any stars under Rank 20, so all you have to do is play (and win) a few games here and there over the course of the month, and you’ll hit Rank 20 soon enough. If you want to keep playing after you hit Rank 20, you can earn yourself some bonus stars as well.

The further you move up the Ranked Play ladder, the more bonus stars you’ll earn — one star per rank. And any bonus stars you earn will roll over to the following month, getting you closer to Rank 20 as soon as next season starts for whatever card back happens to roll out in October. Speaking of which — if you earned enough bonus stars last month to hit Rank 20 automatically this month, don’t forget you still have to log in to qualify for the Burning Legion card back. The card back will be rewarded to players in their Ranked Play reward chest at the end of September.

Blizzard Watch is made possible by people like you.
Please consider supporting our Patreon!
Filed Under: Card Back, Hearthstone Card Back, Rank 20, Ranked Play, September Card Back, The Burning Legion
Advertisement