The Queue: Purple is the color of my energy 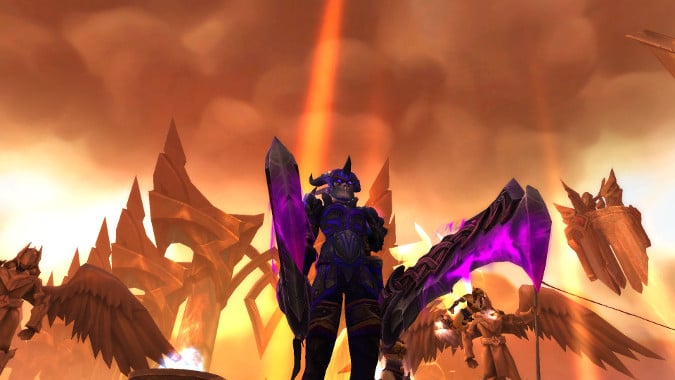 Because I took the time to get a second Warrior to 110, my first Warrior to 110 is a big behind on the gearing curve. But she looks awesome.

Anyway, this is The Queue. I won’t be writing Friday’s because of eye related stuff. So you get me today. Rejoice! Or don’t, I guess. Hey, if you want to give a fella a boost when he’s about to have all sorts of nasty stuff happen to his eyes, you could buy his book. Just saying.

QftQ: Do you think all the Class Halls will get Hallows’ End and Winter Veil decorations?

The Warrior class hall would look kind of silly with them, in my opinion. I mean, look at the place. I’m even starting to warm up to all the vrykul stuff in there, since it really feeds into the Warrior campaign and sets up all these lunatics I have as Champions, like King Ymiron and Thorim.

So I’m going to be a Grinch here and say I hope not. The Warrior class hall is gorgeous and I don’t want to see all that stuff in it.

As someone who plays WoW as more-or-less a single player game–I haven’t raided regularly since ICC, though I do love running dungeons–I actually really appreciate the appeal of an army of alts for Legion. Like, I want to progress my 110 warrior further, because it’s fun, but it’s not like doing so will hinder me later on because I’m undergeared compared to my raid group, because I don’t have one. I currently have 9 of the classes at 100+, and I can definitely see myself eventually leveling up the remaining three (Priest, Mage, and Rogue), just to see the artifact questlines and class halls.

I think I’m likely to end up going this way in Legion as well.

With my eyes being what they are I’m definitely not up to my old standards and I probably won’t app to do any raiding. If friends offer me a spot I’ll gladly come along, but I don’t know how much time I’ll be able to make for it, so I’m already eyeing my next alt after my second Warrior hit 110. I’m thinking either Demon Hunter or Hunter, although Shaman has its appeal. (I don’t hear good things about Enhancement, though.)

Still, the idea of Legion as essentially a single player RPG for me doesn’t really bother me. I’d like to run more dungeons and I’ll likely hit up LFR as well, though.

Q4tQ: Now that people have spent some time doing the new dungeons, do you have any favourite boss mechanics, even if you don’t like the dungeon itself?

Honestly, all the dungeon mechanics still feel ridiculously punitive to melee. Whether it’s bosses running out of range or chasing someone, calling in dragons to destroy an area so you have to move, Helya (just all of Helya) it’s all pretty brutal and I more or less feel obliged to stay Arms just for Second Wind so my healers don’t have to work too hard. I’d like to spec Fury, but I’m just too fragile and easily killed for that.

So no, I don’t like any of the mechanics. I haven’t in years. I think the last time I enjoyed a boss mechanic was during The Burning Crusade when Kael’thas would make the ceiling explode. And I didn’t really enjoy that all that much. Patchwerk? Yeah, okay. I liked Patchwerk.

CHRTH OF THE TOTALLY SEEN PATH

Q4TQ: Am I the only one thinking “Yeah, Vrykuls would be an awesome race … but it’d suck to have to dismount before going through any doors”?

My Tauren used to have that problem all the time. Being awesome really made up for it. Like, so much.

Just out of curiosity, is this ongoing tank/healer shortage a direct result of what happened with the dungeons at the launch of Cataclysm? I ran tons of 5-man heroics during Wrath, all as DPS (either my ret pally or fire mage) and all via LFG, never had unreasonable queue waits, and only encountered truly “bad” tanks or healers a handful of times.

I honestly feel like a lot of tanks were unhappy with the nerfs to tanking survivability going from Warlords to Legion in the name of ‘making healing interesting’. That left a sour taste in my mouth to the point where I don’t think I’ll seriously tank on my Warrior this expansion. (I’ll likely tank on my DK, since that’s what I do on the leveling stream anyway. DK tanking feels a lot better to me than Warrior tanking.)

Overall some classes (Warriors) feel a lot weaker as tanks this expansion to me. Tanking itself doesn’t feel weird, though — I’ve tanked on my Warrior a few times when it was necessary, I just haven’t leveled my Artifact as much as I would like.

My only healers at 100 are my Shaman and Paladin and I haven’t even tried to heal a dungeon on either of them yet. No idea how that’ll work out.

QftQ: This is the first expansion where I’m actually leveling up as a tanking spec due to the aesthetics and playstyle (Vengeance DH and Protection Paladin). That said, I’m utterly terrified and pretty sure that I’d fail spectacularly as a tank in dungeons/raids. I know it’s a rather terrible faux pas to queue as DPS in a tank spec, so is my only recourse to wait until I can snag the DPS weapons and just run through that way instead? Or is tanking (at least in dungeons) not nearly as difficult as I’m building up in my head?

I think those two classes are a touch imba right now and you’ll do fine tanking on them. The dungeons I’ve run, DH’s have annihilated stuff and done crazy tanking DPS. And Paladins are Paladins, they’ll always be Paladins, they’ve been brokenly good tanks for eight years.

But honestly, at least in normal dungeons, I don’t think tanking is hard to do. It can be hard to survive since they stripped a lot of the tools tanks used to not die out in order to make healers feel better about themselves (yes, I’m annoyed) but as long as you have a decent healer, tanking isn’t terribly hard in Legion.

Okay. That’s the Queue for today. By the time you read this, I’ll be strapped down and living through my monthly re-enactment of A Clockwork Orange except worse. Talk to you guys next week.

Blizzard Watch is made possible by people like you.
Please consider supporting our Patreon!
Filed Under: Purple, Tank, Tanking
Advertisement