The Queue: Nobody sing Under The Sea, okay? 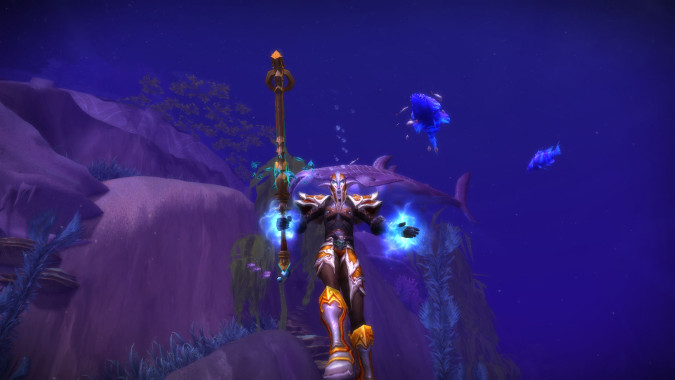 If there’s anything scarier than Queen Azshara it’s Disney.

Anyway, this is The Queue. Let’s do that whole Question/Answer thing.

Going to do Paladin artifact now.

Which one should I choose, Prot (my usual spec), Ret (Ashbringer) or Holy?

We all know I’m not fond of Paladin gameplay in WoW, but I do like Paladins in Warcraft lore — some of my favorite characters in the history of the setting are Paladins. I dig Maraad, I think Uther was a stand up dude, I’ve been a mark for Turalyon for years now. Lady Liadrin, Aponi Brightmane, Sunwalker Dezco — a bunch of cool cats (I feel that I owe you all that) all around. No, it’s the gameplay I don’t like about Paladins.

So when I did the Ret quest and saw the folks I saw, and had the big fight with that guy (I’m avoiding spoilers here) I was by turns excited, astonished, saddened and ultimately quite moved by the whole thing. It’s good to see the various Paladins of Azeroth coming together, and while I honestly think Strom’kar has some awesome lore I won’t pretend the Ashbringer isn’t, well, the Ashbringer. Getting to hold that sword aloft, being called Highlord, it’s all very well done.

That being said, I think you should do them all.

But do the Ashbringer first. You have to.

So I am dusting off my Warrior for legion. She has very little in the way of gear in her wardrobe (boosted toon). Where can she get some inexpensive gear from a vendor for gold. Tried looking this up on wowhead, but it’s harder to find than I thought it would be.

You can get old Badge gear from BC vendors in Shattrath City and the Isle of Quel’danas for gold, as well as Wrath gear from the various vendors in Northrend’s Dalaran, and the Cataclysm gear is sold in Stormwind/Orgrimmar.

But I’m going to tell you now, it’s never been easier to farm gear in old raids. Once you’re at level 110, 10 man Mists of Pandaria raids are pretty easily done. I’m told there’s a bug and Warlords raids aren’t dropping gear right now, but you can pretty easily burn your way through raids up to and including Mists, especially as Prot. So don’t forget that’s an option as well.

Complaint: tanks no longer allow rogues and other CC classes to sap/freeze/trap/whatever. A lot of these longer dungeons are *made* for CC, and are a rogue’s dream deployment (especially Hall of Valor, that place is just made for sapping), and yet here we have Demon Hunters just flying into a group of mobs before the last one is even over. And, of course, a little ol’ rogue isn’t going to *dare* start a group kick tit for tat when queues are so long, so we just have to deal with it.

We exist for a reason. Let us help you.

Here is my take on CC in dungeons.

Sometimes, as a tank, I want it. By all means, Sap away. Sap that really annoying caster who will just stand there and spam an attack and force me to work twice as hard to control the group. But sometimes I don’t need CC. Especially in normal/heroic dungeons, it’s very often not necessary.

I’m sorry you feel slighted if I don’t let you do it, but the fact is, CC takes time. If we don’t need it — if I can easily tank the mobs and AoE can burn them all down — why not do so?

Also, I have a lot of bad memories of old BC dungeons where CC was absolutely essential and if you were a DPSer without any CC, you just plain didn’t get to go to dungeons. One of the things that’s made dungeon runs a lot more palatable to me when I’m DPSing is that we just generally don’t need a lot of CC and I can go on runs and just cut loose with my AoE. I like that. As either a tank or a DPS I like doing my rotation and not having to worry about a wandering sheep or a sapped mob.

So basically, I’d say if I need CC, I will absolutely ask for it. And if there’s a bad case of overconfident tanks never asking for CC, I get that it can be frustrating to have the ability to do it but the tank keeps getting him or herself killed not using it. But from my perspective, the less CC we need, the better I like it.

Book lore Q: I just finished the movie novelization.  A question: they mentioned Magni Bronzebeard’s “weddings”.  Was he married more than once? To more than one wife at a time? I can’t find any explanation.

The Magni we have in game (big diamond fella) is not, to my knowledge, a polygamist nor was he widowed twice. But the game lore is extremely vague on this front and we could find out later that he was.

We know nothing more about movie Magni than he briefly appeared at the end of the movie. So the novelization may be telling the absolute truth. We’ll only find out if they make another Warcraft movie.

For all the transmog junkies, how many of you are going to start hiding belts in 7.1?

I have so many pages of belts I can almost always find a belt I like.

But man, if I could hide breastplates I’d be happy. My Worgen Warrior looks so dumb with all that armor on him.

Okay, that was the Queue. I’ll see y’all Friday.

Blizzard Watch is made possible by people like you.
Please consider supporting our Patreon!
Filed Under: Transmog, Water, World Quests
Advertisement