The Queue: I am so tempted to have Sargeras answer this Queue 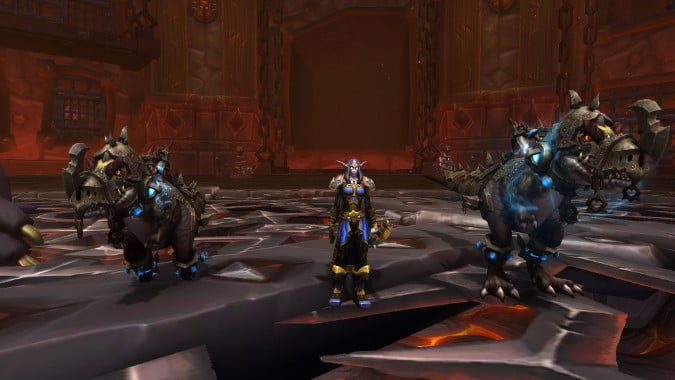 I’m not going to do it. I’m saving a Sargeraqueue for when I really need it. But oh, the idea haunts me. It vexes me, dear readers. Oh, how it vexes me.

What do people think of The Instance’s new “Lore” podcast? Is it a blatant attempt to destroy the hard work of BlizzardWatch?

There are more than a few lore-centered YouTube channels, podcasts, streams, etc out there. One more doesn’t hurt anything, and we at Blizzard Watch will keep on keeping on with ours as long as y’all want it.

Mind you, I haven’t actually heard it.

So…what exactly have the Horde and Alliance been doing since the Broken Shore? Other than Sylvanas wanting to become immortal and Genn chasing her on a vengeance spree (can’t say I blame him) I have noticed a very distinct lack of Alliance and Horde on the Broken Isles? Has everyone just given up and decided to party until the Infernals rain down on them?

This is a good question. I’m not going into spoilers for future patches,  but I’ll talk about what I’ve seen doing Class Order Hall campaigns on my Warrior and Death Knight, as well as what you already mentioned in terms of Stormheim.

Essentially, the Horde and Alliance are in disarray, and it really hasn’t been long at all since the Broken Shore in game. Considering both the Horde and Alliance took heavy losses at the Broken Shore (and then took more in Stormheim’s opening) it’s not surprising to me that they haven’t been able to mount a major offensive and have let the Kirin Tor, the Illidari and the Order Halls lead the fight.

Doing the DK campaign you interact with quite a few Horde/Alliance figures, and it definitely feels like stuff is ramping up, but they haven’t recovered from what happened yet. 7.1 promises some changes and I’d love to talk about them, but I think we should wait a while before I dump spoilers here. But I’m excited.

WQs are supposed to generally award better gear? Really??? I’ve had to DE most of mine, which is the biggest small consolation, to be fair.

Also /hattip for the excellent nudge to start one’s own beginner mythic groups, I think that may be the route for me…

I’ve noticed on both of my 110 Warriors that as I get better gear, the default ilevel for World Quests improves. When I was first doing them, they barely awarded 800 gear, and now they tend to give me 830+ on average. But even back when I was woefully undergeared, I got lucky a few times and got Titanforged pieces (the shoulders my raiding Warrior wears are 850 and I have an 850 ring also from a World Quest’s Titanforged drop) which boosted my ilevel a solid amount.

I’ve seen someone get ilevel 870 boots from a World Quest, but I havent gotten that lucky myself.

Blademaster orcs have always bothered me, from an aesthetic view,
99% of orcs are all blood and thundered, zug zug, spikes, and huts made of mud and spikes.
And also they have these samurai.

It’s really dissonant. Like if you took Silvermoon at the height of High Elf civilization, and behind the astrolabe tower they have a NASCAR track with a bunch of blackout drunk elves in the in field.

You haven’t been to the Quel’Thalas Speedway? It’s right down the Dead Scar. They race twice a day.

I’ll admit to finding Blademaster Orcs to be really weird. The ones in Warlords were the most reasonable take I’ve ever seen on the idea — making them seem less overtly Samurai and more Orcish (the ones we saw in Mists of Pandaria were harbingers of this portrayal to some extent).

To a degree, though, this is me trying to impose one monolithic culture on Orcs who lived in scattered clans. The Burning Blade before the forming of the Horde had their own traditions and customs, after all. In a way, while Warlords might not have been the expansion we all wanted, it did give us a chance to see Orcish cultures that we otherwise couldn’t because the Blood of Mannoroth wiped them out, and that includes the original practices and rites of the Burning Blade.

I do like when Blademasters use the Blackhand Doomsaw model instead of a sword.

My champions are all around ilvl 820 and I haven’t seen an equipment mission in days and days. RNG or hidden limitation? (I can’t switch to the class hall upgrade that gives equipment for another 9 days while I research double legendaries.)

It’s RNG. One of my followers is 830, the rest are struggling around 800 cause I’m having the same problem.

Okay, that’s the Queue for today. I apologize for not doing a Sargeras Queue. The day is coming, but it is not today. No, not today.

Blizzard Watch is made possible by people like you.
Please consider supporting our Patreon!
Filed Under: Queue, Sargeras, Thok
Advertisement