The Queue: Havi’s ravens are jerks 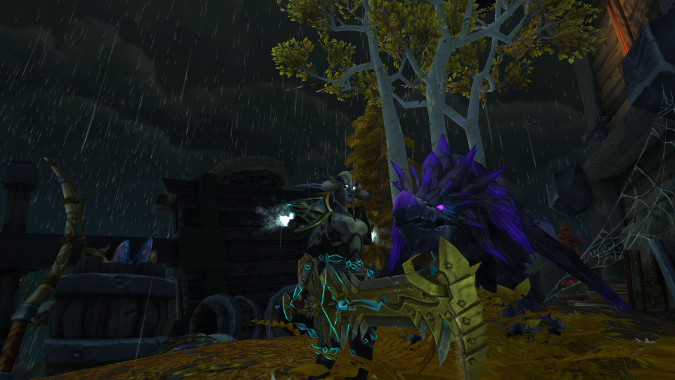 Listen, you stupid bird, I am the Battlelord of the Valarjar. I don’t care if you like me or not.

The LoreWatch episode last week implied that it had to do with the Scythe of Elune, which I could buy, even though I’m a bear, because I did have the Scythe in my bags. But now it’s happening to my mage. I’m just now learning that this doesn’t happen to everyone?

As it turns out, they have a reason. To break it down, the two ravens had a magic gem that let them read everything written they came across. A Night Elf named Ravencrest (perhaps Kurtalos himself, perhaps an ancestor of his) ended up tricking the birds and stealing their magic gem and as a result the ravens harbor a grudge against all Night Elves.

So there you go. Night Elves done irk those ravens something fierce.

“Suramar City has so many things a city would have, and those things are actually being used”
YAH! Like a Zoo with a dinosaur that you can ride and terrorize Demons with. I agree, every city should have that! :D

Here’s my thing about that zoo.

The Nighborne have been stuck in that barrier for ten thousand years. In that time, they were so ignorant of the outside world that they would exile people and had no idea what happened to them — had no idea if they survived or died, had no idea whether or not it was habitable outside the dome. (Some quests imply there were folks smuggling in outside goods but this strikes me as strange considering we’re told they had to use the Nightwell for sustenance because they couldn’t get food.)

So my question is this — where did those zoo animals come from?

The only answer that makes sense is that Suramar has had a breeding program for all the animals in its zoo for ten thousand years. They couldn’t be getting new animals in, especially not animals like the various dinosaurs (unless you’ve seen a devilsaur anywhere near Suramar, where would they even get the breeding stock from) and so they were basically using their captive stock to continue their animal’s lines.

So either those are the most inbred dinosaurs ever, or the Suramar zoo cheats in some fashion. Either they polymorph other animals into dinosaurs to keep the breeding stock refreshed, or they summon the animals through the barrier somehow, or something even weirder than that.

Q4TQ: Is i850 the maximum ilvl for a follower, or can it go higher?

As I understand it, it’s the max level right now. I believe it’ll be going up in patch 7.1.

“Warriors have Finna Bjornsdottir, for example, who is a tank with an AOE taunt… but she only appears when you’ve pulled more than one at a time, and I believe she has a hidden 2-minute cooldown. You don’t push a button to make her appear, she’ll just do it — and when she does, having a tank AOE taunt everything for you is meaningful.”

One problem with Finna though is you can’t stop her appearing if she’s your combat ally so say you’re trying to collect ley spiderlings by throwing some powder on the ground. Tough because Finna will appear and start murdering them!

This is why I use Thorim as my combat ally. You summon him, he doesn’t choose when he appears.

One thing I have to say is I absolutely adore World Quests! I haven’t been playing as much as normal lately due mainly to my infatuation with Witcher 3 but I still managed to jump from 796 iLevel to 837 iLevel with just WQ’s! This system is utterly fantastic! :D

On the one hand, I’ve used World Quests to get geared for raiding. I don’t run Mythic dungeons (at least I haven’t yet), I just do my World Quests every day (at least whichever faction has an Emissary up) and that’s all I needed to get myself raid ready. I do Heroic dungeons only when a World Quest directs me into them. And I’m perfectly content with this system.

On the other hand, I do find myself wondering what the point of LFR is anymore. World Quests give better gear especially if you get lucky on a Titanforged piece or two. I pretty much think that I’ll just do raids and World Quests this expansion and I’m okay with it. I’m not sure if I should be or not.

Q4tQ: Have you ever looked at what we’ve done (and what’s happened to us) ingame and wonder about the mental state of our characters?

Over the years, we’ve been sent to increasingly violent regions of the world (and beyond), and fight monsters. We are beaten, burned, infected, our minds exposed to powerful mind altering drugs, our souls ripped out of our bodies, flayed (and then destroyed), attempted to be eaten, actually been eaten (both spiritually and literally), our minds brought to ruin by Old Gods, and (since Spirit Healers are now canon) died so many times over that death itself has no meaning.

What could happen to a real person who has been through all that?

There’s a reason I switch mains a lot now.

I mean, just your average Demon Hunter alone had to eat the heart of a demon and feel it consume him or her from within. Your Death Knight died, was raised and forced to endure an existence where inflicting pain and death sustains them. My original Warrior went to every raid from Molten Core to Hellfire Citadel (I finally semi-retired him this time around).

One of my Draenei Warriors is still in his Garrison. He’s likely never going to leave it. I think he’s earned his retirement, and while Draenor isn’t his world, it’s very close. I think he’s happy there.

I mean, can you imagine what a Forsaken Holy Priest’s state of mind would be?

Yeah, I think about it a lot. Then again, I’m often told people can get used to a lot. Some of the stuff that’s actually happened to me (I’ve died twice, for example) freaks people out but I generally don’t think all that much about it.

That’s the Queue for this Tuesday morning. Thanks for coming around and chatting.