Starting soon we’ll be diving into more Legion info with the Legion design retrospective panel, where we’ll be talking about the early design of Legion — and how the Blizzard team built the game we’re playing today.

1:03: Jeremy Feasel is on stage, talking Azsuna, one of the first zones they worked on.

1:04: We started playtesting very early, with pristine elven cities. There were a lot of things that didn’t make it into the final game:

1:06: We looked back at this and it wasn’t what we wanted. There was something we were missing… the Burning Legion. The Legion was here with new toys, new structures. “… destroy our major lore characters. Sorry about that.” 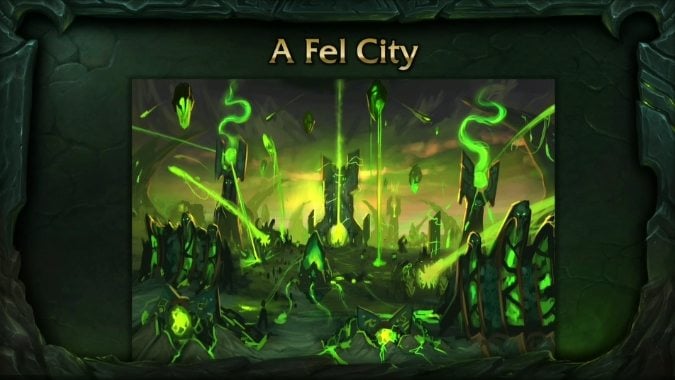 1:08: The art team built these fel ships that demons poured out of. And a fel city, taking over our world. We loved the art style and applied it to the rest of the world — including the Tomb of Sargeras which is now completely “feled out.”

1:09: Now Jonathan LeCraft is up. Started out working on Legion by picking the big features of the new expansion, dungeons, raids, Demon Hunters. That was back in Burning Crusade. So when we got another chance we jumped on it. Had an internal build for the Demon Hunter in about three days.

1:10: We looked back to our core philosophy for our gameplay goals. The Demon Hunter had to be high fantasy, easy to learn — which we did by limiting their abilities to a single bar. 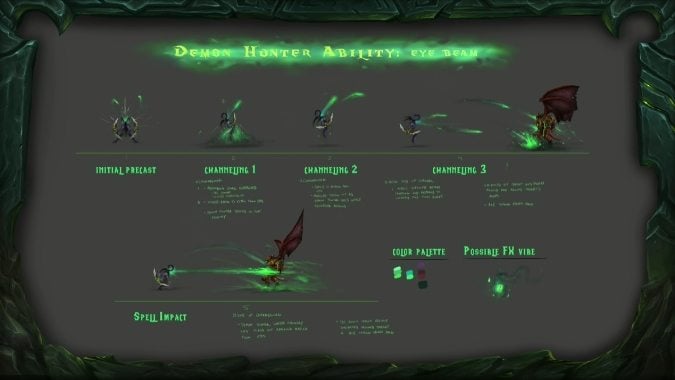 1:11: Eye Beam ability. We were talking about the Illidan fight and someone says “eye lasers.” We though this was kind of ridiculous… but of course we had to do this. The first iteration was a beam from your eyes to the target, did some damage around them. Then added hovering in the air, with a beam that followed your mouse curser.

1:12: Next we got this awesome storyboard from the artists and we loved it… but as we played it, it felt like the ability was doing too much. “It kind of feels like two abilities.” So we cut it in half: Now Fel Barrage and Eye Beam.

1:14: Another ability with humble abilities is Fel Rush, which started basically as a charge. No target, damaged everything in your path, was really fast, and ignored gravity. But there was one wrinkle: as you were heading to your first quests, it would Fel Rush you to your death. So how do you make it that you stick to the terrain but can avoid obstacles? Looked back to a 2D version of Megaman, which had a jump and a dash: it had solved the problem by giving control to the player, where if you’re on the ground you stick to the ground and if you’re in the air you do an air rush. 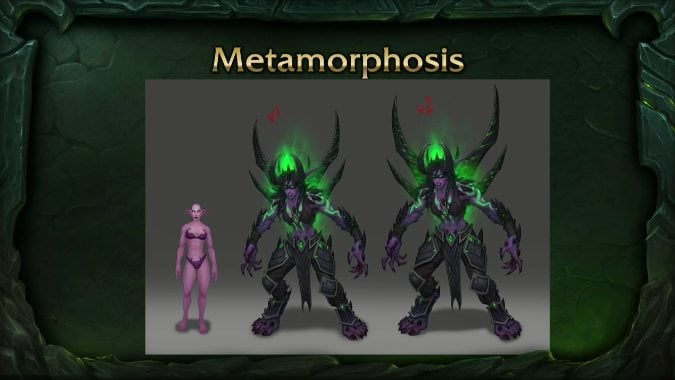 1:16: Let’s talk about the big purple demon in the room. Initially we just thought it had a damage buff. But feedback said it didn’t feel great. So we doubled the damage. Same feedback. Doubled it again until it was ludicrous. But people weren’t feeling the changes — we added the jump and stun and a haste bonus, so you could really feel the effects of the ability. 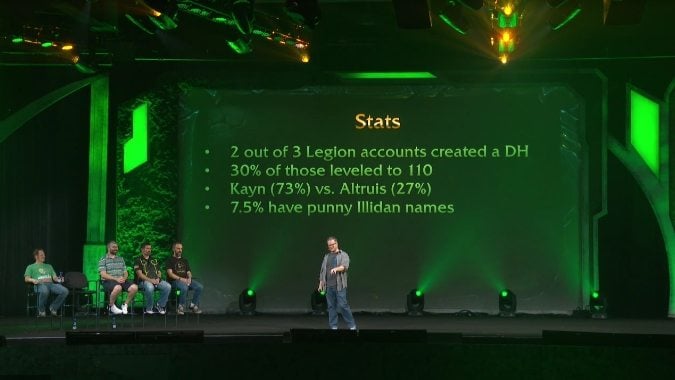 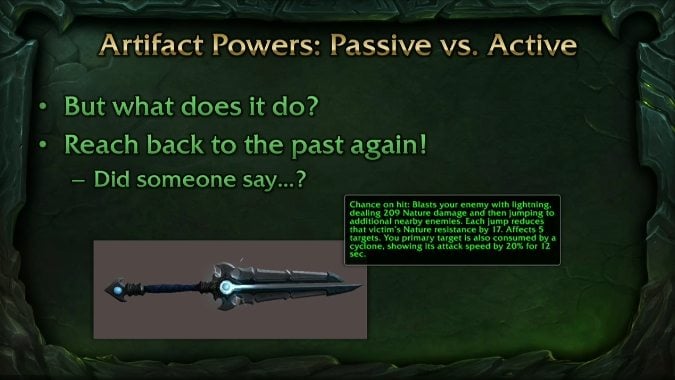 1:19: Now Owen Landgren on Artifacts. We wanted Artifacts to be the ultimate expression of power and fantasy. How do you make them more powerful? We started thinking about Ashbringer. How could we build on it? We came up with lots of ideas… and decided they were specific to Retribution Paladins.

1:22: The 1.0 Artifact talent tree we built before we could even put it in the game. It was like a classic talent tree structure, letting you pick between one of three trees to get to the powerful ability at the end. But then you went through all the traits to figure it out… it wasn’t fun to force you to make a really intense choice up-front. So we tried tiers, where you had to unlock everything on each tier before getting to the next one. But that had no choice. We tried an arc approach where you moved clockwise around the Artifact… but again, you were making that important choice immediately. But the arc had one thing we liked: Ashbringer was front and center. Then we built the constellation system. Hopefully you’re having fun with them today.

1:24: We looked back to the legendary weapons to get inspiration for powers. We started with passive abilities, but those passives didn’t feel like they changed anything for gameplay. So we changed it to active abilities which gave players choice, an “emotionally visceral moment” when you used your Artifact power. 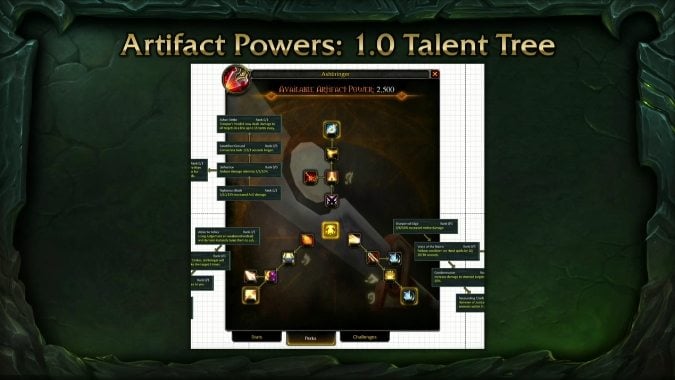 1:27: So how does your Artifact grow? We mirrored the player experience: experience. But you could get behind other players very quickly. So we tried caps, which worked for valor… but then there was no reason to play when you hit the cap. So we hit on Artifact Knowledge. So we’re making sure play is always valuable but you don’t diverge too far from your friends.

1:29: Now on to Brian Holinka to talk about the honor system in Legion. We have a lot of people who love PVP, but it’s always better when you have more friends to kill. We want to bring more people into our PVP love circle. 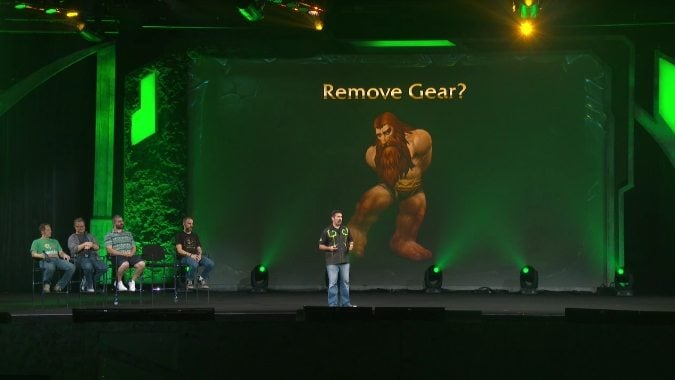 1:31: When Heroes of the Storm and Overwatch came out we saw a lot of people playing other competitive games, when we thought that players who didn’t do PVP just weren’t interested in that kind of competition. Maybe gear was the problem — so we tried removing it. “I don’t mean naked PVP.”

1:32: But gear is what defines your character. What if we tried what we did in Mists challenge modes and scaled gear? But then there was no reason to chase better gear. So we came to this hybrid approach where we set your stats but increase it based on your ilevel. So gear matters and you want to get better gear… but it doesn’t matter that much.

1:36: But we didn’t want it to be about going from 1 to 50. How could we meaningfully continue progression? So we took inspiration from other games — what if you could reset yourself to Honor level 1 and start over? (I.e. Diablo.) Our plan now is to continue to advance your Prestige level each season. 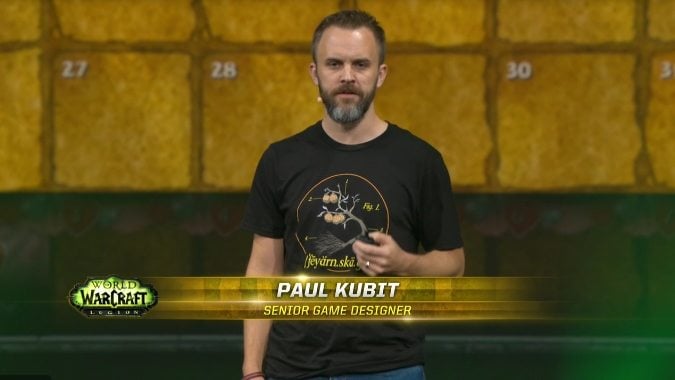 1:38: Paul Kubit up now, talking profession quests. And do you recognize his shirt?

1:40: We started building profession quests. You’re mining, you find a cool rock, you bring it back to your trainer. But we started to see a problem. Tons of quests in your log! If we did it for secondary professions it would be overwhelming. Fishing doesn’t have many quests and unlocking the Underlight Angler… which started as a joke. “Artifacts are weapons, fishing poles are weapons…” Then we started talking about how it would work. 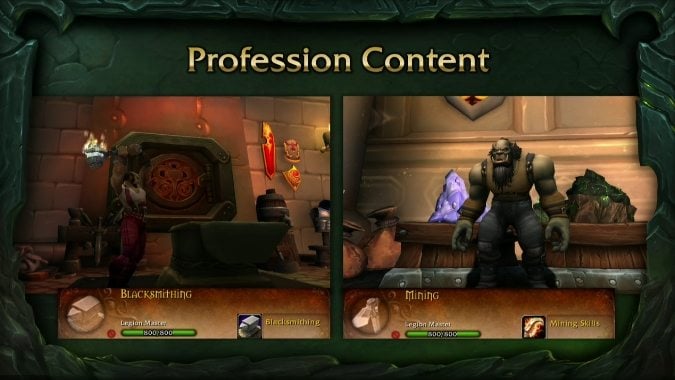 1:42: We wanted fishing to be more of a community experience, so we added Dalaran fishing raids. We saw this with people fishing in Garrisons and decided that was a cool community thing. 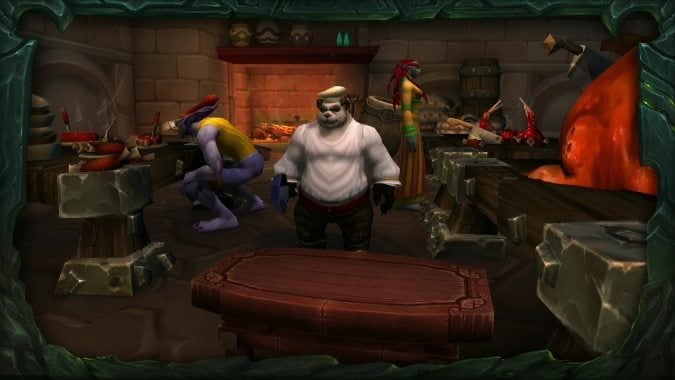 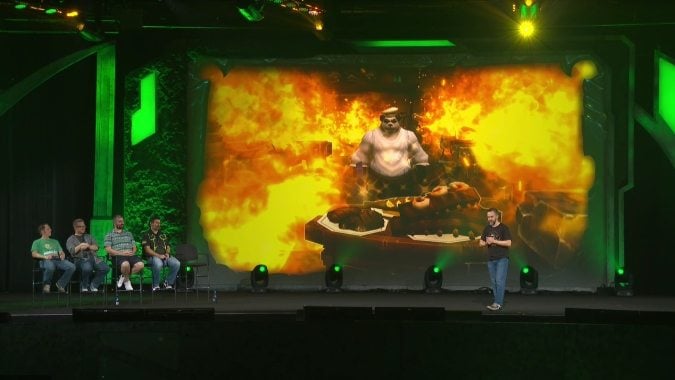 1:45: What worked well with Nomi? A couple of things. He gave you a reason to head to Dalaran every couple of days. And… oh, yeah, he burns all your food. The burned food thing started as a joke. We wanted you to have a reward no matter what, so we gave you something you could sell for gold.

1:47: Multi-tapping gathering professions worked great! Except for skinners. We’re working on it, but in the meanwhile be sure to loot your corpses. 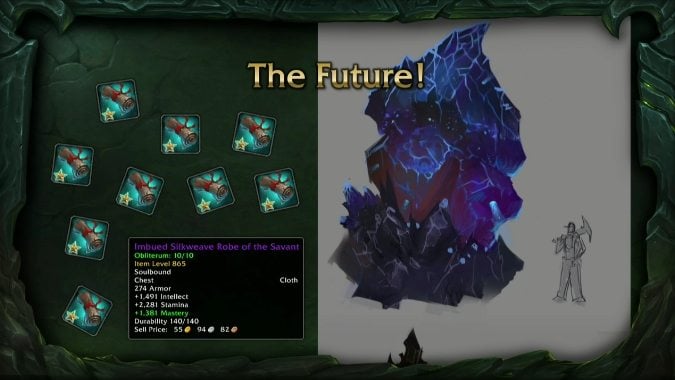 1:49: The future! We want to make sure crafting and viable throughout the expansion. In 7.1 we added the blood trader and upgraded the obliterum cap. In 7.1.5 we’ll increase the cap, too. And we have more plans for 7.2. And the patch after that. Gatherers can look forward to new items to gather, crafters can look forward to new items to create, and even, maybe, legendary crafted items.

1:50: Jeremy Feasel is back to talk World Quests.

1:51: We looked back on the Mists dailies, which told you stories for characters and factions you’d already met. We wanted to tell those stories but not give you a daily to-do list that constantly grew whenever you unlocked dailies for a new faction. There was a great variety of content, but the variety of rewards wasn’t so exciting. 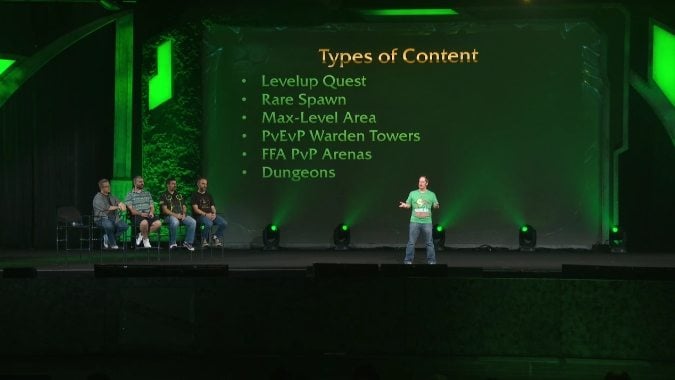 1:53: We built level-up quests, rare spawns, max level content, PVP/PVE content, crazy PVP free for all arenas, dungeons, pet battle quests… what else could be a World Quest? What could we do that went beyond that idea of the daily quest system? 1:55: One of the first questions we had to answer was how many icons did we want to save on the screen? Is there too much to do in one space? What we landed on got very good feedback.

1:56: Not only did we want to vary experience, but also rewards. Even if you had the same World Quest twice in a row, the rewards could be different, letting you have a different World Quest every day.

1:57: But we started with 50 World Quests a day. Which is too big. So we took a system we liked: Hearthstone’s daily system. Emissary quests that send you to different zones every day. All together, this means you get a lot of variety. 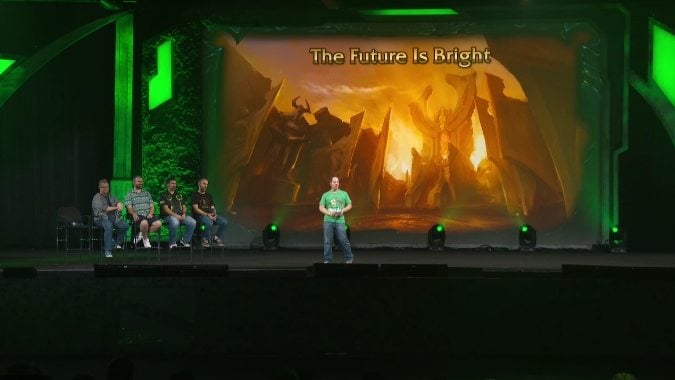 1:58: But a lot of things wound up on the cutting room floor, like scenarios, class-specific World Quests, summonable bosses, Legion invasions in the Broken Isles (now coming in 7.2), rare World Quests (like Hulon in the Timeless Isle), regional World Quests… and you’ll be seeing all of this in patch 7.2.

That’s all for this panel! We’ll see you back with more from BlizzCon soon!

Blizzard Watch is made possible by people like you.
Please consider supporting our Patreon!
Filed Under: Blizzcon 2016, Legion
Advertisement