The Queue: Just hand over the corpse, Liadrin 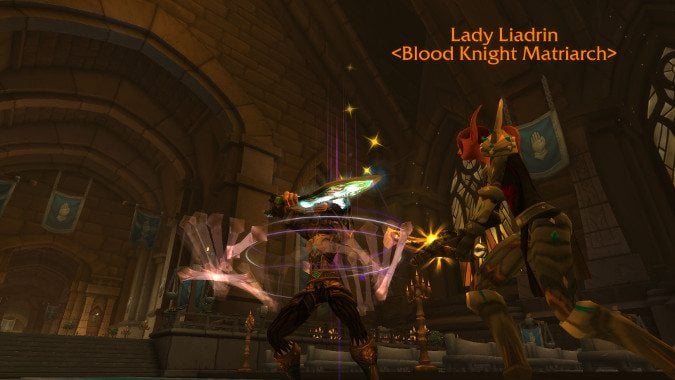 The Deathlord is a busy woman, Liadrin. Just give her the corpse and she’ll be on her way. If not, she’s going to have to smash your Blood Elf face into the ground and step over you to the body, and that’s just not something that has to happen here.

QftQ: But first a disclaimer: The moment I started writing about this Q, Medan popped to mind, and I know he is hated.

There are so many powers in the WoW universe that exist side by side, Light and Fel and Void and Nature and so on. Generally there are themes to villains and what they are associated with, either Legion, or cruelly harnessing light, or something. Are there any villains that try (successfully) to harness various types of power, and combine them into new forms we, as adventurers, have never seen before? Now that they’re defined in Chronicle, is there anyone who could set out to try to master all of these different forces?

There were combined shadow and fel creatures in Hellfire Citadel (including Xhul’horac, the Void Revenant that Gul’dan twisted with fel energy), and Zeliek in Naxxaramas was part of the Scourge but could still touch the Holy Light. One could argue Disc Priests are in this category as well — they touch and command both the Holy Light and the Shadow in their pursuit of control over both. Also, Nefarian kept trying to make a Chromatic Dragonflight, so in a way he was up to much the same thing.

Q4tQ: What is Velen’s situation right now? He basically tried to kill us at the end of the Exodar scenario. Was that just a momentary insanity thing that we are going to overlook? Is he still on our side?

He wasn’t trying to kill you, just stop you. And in fact, if you do the fight fast enough, he doesn’t even get a chance to do that — Velen has yet to go hostile towards me because I always blow that SOB Rakeesh into little pieces before Velen has a chance to get testy with me.

Velen’s quite angry but he’s not hostile towards you. Paladins and Priests even see him again in their class order hall campaigns.

I’ve been away awhile. I was an active member of Wow Insider, and played WoW from BC through MoP. I last played in September of 2014, so I missed all of WoD and these first few months of Legion. I have several level 90s that have been waiting very patiently for my return, and I can stay away no longer. I miss the game, and I’m about to reactivate my account and start catching up.You guys (staff and community) were always my favorite source of information, so I’ll start here: I don’t know any of the story of WoD or Legion, and I’ve started poking around the old Haunts (here, Wowhead, Icy Veins, etc) and I’m though not exactly a newbie, I kind of feel like one, because of all the time/changes that I’ve missed.

Any suggestions on how to best catch up, both on lore and on game play. I don’t mean character specifics like rotations and stat priorities. I think I can find that stuff pretty easily. But more general game stuff that applies to everyone, like what are relics, or artifacts (artifact power?) mythic plus dungeons, class halls, garrisons, that sort of stuff. Most forums talk about these things with the assumptions that you know what all this stuff is, and I get why they do that. But how does someone like me who knows nothing that has happened in over 2 years best get up to speed?

First off, welcome back, Broose.

Okay, I’m first going to suggest that you ask questions here in the Queue. People in the community here are knowledgeable and helpful. And anything they can’t help with has a good chance of being answered by one of us sooner or later.

Also, we do have a lot of content here. For lore, you can’t really miss much if you dig through our Know Your Lore columns. You can search for other terms of interest (for example, here’s our Artifact coverage) and we have FAQ‘s and guides to help you catch up on the basics.

Generally speaking, you’ll catch up pretty quickly. Legion is different but it’s also pretty familiar. Good luck and remember, if you have any questions please do ask them here. It’s what The Queue is for.

QftQ: Why is the Doomhammer an Artifact? Don’t get me wrong, I love that I can play with such an iconic weapon, but the three Shaman artifacts are 1. A Titan-made weapon built specially for a Keeper that gave him power over elements. 2. A scepter that contains some of the last known remnants of water from the Well of Eternity. And 3. An orc hammer that was maybe blessed by some shaman at one point? Again, I love the thing, but I don’t know why it’s considered so powerful/important.

To quote Rise of the Horde:

The last of the Doomhammer line will use it to bring first salvation and then doom to the orc people. Then it will pass into the hands of one who is not of the Blackrock clan, all will change again, and it will once again be used in the cause of justice.

The Doomhammer is to Orcs what the greatsword Strom’kar is to Humans, a weapon deeply connected to the history and traditions of the entire race, a weapon of destiny and prophecy. The Doomhammer was crafted with the aid of the Elementals, out of the elements themselves, and its power and purpose has always been to defend and protect those elements and the natural order of things. As such, in the hands of a Shaman who can truly master him or herself, the hammer is indeed a weapon unlike any other.

It’s telling that Thrall used the Doomhammer as a single weapon — despite his gifts as a Shaman he never reached the level of self-control and communion with the weapon that would have allowed him to create the echo of the hammer from the pure elements.

Another way to put it is this — the Doomhammer is much, much older than the Ashbringer, and the Shaman that made it did so with the help of Draenor’s elemental lords. It then passed from generation to generation before it became the single most important weapon in Orcish history. It’s earned its place.

Okay. That’s the Queue for this Friday, December 30th. This is my last Queue for 2016. Hopefully 2017 will be better for everyone. We can but hope, right? Take care and be kind and strong for each other, watch each other’s backs, support each other as best you can.

Blizzard Watch is made possible by people like you.
Please consider supporting our Patreon!
Filed Under: Artifacts, Fel, Light, Shadow
Advertisement