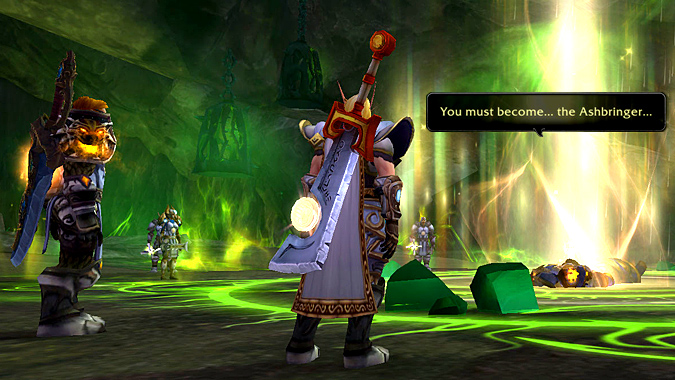 If you’ve been grinding your way through your Artifact Traits, you’ve probably aware that the Artifact Power needed to get later traits doesn’t increase as sharply as it did at earlier levels. This can leave you well behind your peers if you aren’t spending a ton of time at the AP grind. And if you switch specs, you’ll be way behind. The further we’ve gotten into the expansion, the more this power gap has shown itself. According to Watcher, more casual players went into Emerald Nightmare with 20 or 21 points in their Artifact, while serious raiders had 24 or 25 points. Although the players putting in a lot of time were more powerful than the players who weren’t, the gap was relatively modest.

But when players headed into Nighthold, the difference was extreme: casual players were just climbing over 35 points while serious players were going in with maxed out Artifacts at 54 points. That’s a significant power gap, with those top-tier players being about 10% more powerful — which wasn’t at all what Blizzard intended.

So what’s next for our Artifacts?

In patch 7.2, we’ll be getting Artifact Traits beyond point 34, plus changes to Artifact progression to reduce the overall power gap. We already knew that players with more than 35 points in their Artifact will have AP spent beyond that refunded to spend on new Traits. But don’t panic, because Blizzard doesn’t mean this loss to be a power downgrade.

On top of that, the amount of AP needed to acquire higher-level Traits will be increased to even out that power curve. The numbers haven’t been fine-tuned yet, goal is for players who earns twice as much AP to be 1.5% more powerful, and someone who earns four times as much AP to be 3% more powerful. Along these lines, if you’ve maxed out your Artifact and want to get ahead of the game in 7.2 by hoarding Artifact Power, don’t — current AP items won’t grant AP in 7.2 to prevent this.

Blizzard is also improving AP rewards from high end content, and some of these changes are already live on the PTR. On live, the best way to grind AP is to just run Mythic+ Maw of Souls — a relatively short dungeon — as many times as possible each week. Can you say boring? In 7.2, longer dungeons will reward more AP and you’ll get more AP from raiding Nighthold, too. This means that whatever you choose to do in-game should grant you a decent amount of AP for the time spent.

Check out Watcher’s full comments on these changes below.

Originally Posted by Watcher (Official Post)
Artifact Power has been a hot topic lately, both around the community and within the development team. With Patch 7.2 on the horizon, introducing both new artifact traits and additional Knowledge levels, we have been reflecting on the way the system has unfolded during the first months of Legion, and evaluating changes based on the lessons we have learned thus far.

First off, a look back at where we started.

From the outset, Artifact Power was intended to serve two intertwined purposes: First, it offered max-level progression that was not entirely item-driven, along with choices and elements of character customization as players traversed their trait trees; second, it was meant to serve as a universally desired, consistent reward from all types of content.

In crafting the systems that delivered Artifact Power, we weighed the merits of hard caps versus a smoother system of diminishing returns. We had extensive experience with hard caps, through multiple past iterations of currencies like Valor Points and Conquest Points, and wanted to avoid several of the downsides of that approach. For example, a cap inherently feels like more of an expected quota, where missing a week or falling short of the cap puts you clearly, and potentially permanently, behind the curve.

Instead, as everyone knows, we settled on an open-ended system of diminishing returns. Without any hard caps on how quickly players could earn AP, it was essential to have some sort of limiting mechanism on the gap in power between players of different playstyles, and different levels of time investment. We accepted the admittedly complex design of Artifact Knowledge because it solved this problem, effectively reining in the size of this power gap. Players trying to progress past the expected artifact level for their Knowledge would run into those rapidly diminishing returns, while those who played less than that would have Knowledge as an accelerator to help them catch up to the cutting edge. When Emerald Nightmare was new content, while the average raider was at 20 or 21 points, the most dedicated might have been at 24 or 25 – a relatively modest gap.

We feel that we made two major missteps with the Artifact Power system that increasingly manifested themselves as we got deeper into Patch 7.1 and 7.1.5. And both of them served to undermine that core goal of ensuring that the gap between players with different levels of time invested into the system could not grow too large.

First, the cost of ranks in the 20-point final trait remained relatively flat, as opposed to the rapid exponential scaling up to that point. This meant that someone who spent twice as much time gathering AP as I did would have roughly twice as many ranks as me. Instead of the 24 vs. 21 gaps we saw in Nightmare, a number of hardcore raiders entered Nighthold with 54 points, while others were just beginning that final progression and found themselves with nearly 10% less health and damage, equivalent to being almost a full tier of gear behind. Players who switched specs or characters along the way found themselves in a similar position. The power gap was larger than ever before, which created a sense of obligation and a number of negative social pressures that the system had previously tried to minimize. In short: We’re not at all happy with how this worked out.

A common suggestion is to simply reduce the amount of Artifact Power required to fully unlock the artifact in 7.2. This would not solve the underlying problem, but would rather reduce its duration while heightening its intensity, as competitive players sprinted to finish their Artifacts in order to be “ready.” But then we would inevitably tune around that completed power level, and other players would simply be playing catch-up the entire time. And in the long run, Artifact Power would not be serving its intended purpose of ongoing parallel progression. A capped-artifact player who goes a week without getting any item upgrades ends the week literally no stronger than before. Part of the value of the artifact, both for personal progression and guild progression, lies in ensuring that everyone is at least a bit stronger next week than they are right now, and a bit closer to overcoming whatever obstacle stands in their path. Our goal is for Artifact Power to always be of some interest as a reward, whether from a World Quest, or as a consolation prize when failing a bonus roll.

Instead, we are focusing on fixing the mistake of flat cost scaling at the end of the progression, and instead keeping the increases exponential throughout, while also strengthening Artifact Knowledge as a core pacing and catch-up mechanism. These changes should be visible in an upcoming PTR build.

This is done with the primary goal of reducing the power gap based on time investment, while preserving Artifact Power as an endgame reward that everyone values. If the leaders in Artifact Power were only a few points ahead of a more typical player, rather than crossing the finish line when most were just leaving the starting blocks, players with less time to commit would not be as disadvantaged in competitive activities. If a Warlock were choosing between having 48 points in a single spec or 44 points in all three specs if they’d split their efforts evenly, the barrier to playing multiple specs would be significantly reduced. We are still tuning the curve for 7.2 trait costs, but we’re currently targeting scaling such that someone who earns twice as much AP as me will have an artifact that’s only ~1.5% stronger; someone who earns four times as much AP as me should only be 3% stronger. On the whole, this should be a massive reduction in the power gaps we see in the live game today.

The second problem with our initial implementation was that repeatable sources of Artifact Power (Mythic Keystone dungeons in particular) dominated time-limited sources such as Emissary caches and raid bosses. The fact that a large portion of the community evaluates their Artifact Power needs using “Maw runs” as the unit of measurement is ample evidence of this failure. We very recently deployed a hotfix to increase AP earned from Nighthold in order to make raiding, with a weekly-lockout, better compare in efficiency to repeated Mythic Keystone runs. And in 7.2, we’re more thoroughly addressing this issue by adding a significant amount of AP to the weekly Mythic Keystone cache, while somewhat reducing (and normalizing based on instance length) the AP awarded by repeated runs. These changes are being made to narrow the gap in AP earning, and thus power, based on time investment.

All of the above changes are aimed at allowing players the freedom and flexibility to decide how they want to spend their time, and which goals they wish to pursue, while limiting the difference in power between players who arrive at different answers to those questions.