The Queue: Bracers are the bane of my existence 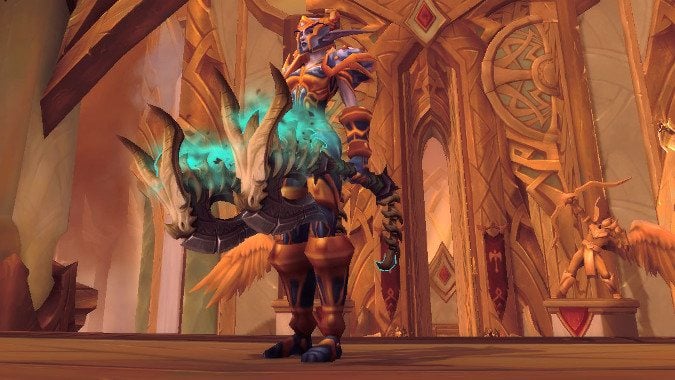 So, I have a bunch of armor sets on the dummies in my Order Hall, but many of them aren’t complete in the Wardrobe. I was baffled by this until I went and looked at them and found out that while the dummies don’t seem to care, the Wardrobe demands bracers in many cases.

I have to go farm like thirty bracers now.

This is not making me at all happy.

Have you ever ran into your WoW character’s doppelganger? Thanks to the class halls, I’ve recently seen both my warlock’s, and my warrior’s. Tried taking screenshots of both, but they ran off before I could get a decent one.

I know that there are probably zero truly-unique player characters in the game, what with our customization being pretty limited, but it’s still fun to run into one with the same hairstyle, and even similar transmog. The fem-draenei warrior I saw was even sitting on the same mount. :D

I haven’t really met my doppleganger so  much as I accidentally made one — my Death Knight and my Warrior were practically identical until I realized it and took them to the barber to make some changes. I don’t know if it’s because I went NE for both of them, but I don’t see a lot of NE women in plate so I’m generally fairly safe from this. Could just be a consequence of where I play, I suppose. Other servers might have different populations.

In the vein of my dumb Legion question the other day, another one. I read this stuff when the expansion came out but I’ve forgotten, and instead of digging through Wowhead comments, I’ll just ask here for a quick and dirty answer.

When you start the Legion intro quest, how soon is it before you’re dumped into Dalaran proper?

Without actually going back and doing it again, I’d say the scenario takes between 30 to 45 minutes to complete, followed by the quest to go to Dalaran which takes about 10 minutes. I’d budget about an hour to get through the whole process on a first time 100 if you either can’t or don’t want to skip any of it. (You can’t skip it if you haven’t done it already on at least one character.)

What’s your take on how Legion has delivered ‘class fantasy’ for characters? I felt like they dropped the ball with my main, a protection warrior, but I loved Gladiator Stance and being a DPS in prot.

I’m glad you asked, because I’m going to kind of reverse a stance I held when the expansion came out. I long argued that we should take a wait and see approach to this, but it’s patch 7.2 and we know a lot of class change is coming in 7.2.5 so I feel safe talking about it now.

I feel like the whole ‘class fantasy’ thing is a trifle limiting. By definition, the harder you try and deliver on this idea, the more you’re leaving out. Using Warriors as an example, delivering on the TG class fantasy meant leaving Single-Minded Fury Warriors with a class that no longer fit how they wanted to play.

I understand the desire to streamline and focus on core concepts of the classes, but ultimately there were (in my opinion) a few babies tossed out with all that bathwater — a lot of quirky, perhaps less optimal ways to play like two handed Frost for DK’s, SMF and Gladiator Prot for Warriors, a host of small things on Hunters like traps (even now that they brought some traps back for non-Survival hunters, it feels strange to play my BM hunter and not have them) — there’s just always going to be a trade off when trying to give people this kind of idea. If you give players a perfectly executed Outlaw Rogue with a swashbuckling feel, what did you make not viable in the process? Is it worth it?

For classes that I play, the results have been mixed. Arms feels very well executed in terms of what it’s trying to do, Fury feels like it’s working but I know I always preferred TG to SMF, if I’d been a SMF Warrior I’d be really unhappy. Protection is a tank spec, nothing but a tank spec, and the loss of Stances still feels strange to me. I liked Stances. How do you give Warriors their class fantasy while removing something that’s been an aspect of the class for a decade?

But I don’t play every class in the game, and even some classes I do play I haven’t done much with this expansion, like Shaman. So I can’t say how they’ve done for everyone. My general feeling is, once you decide X is the class fantasy, everyone who plays it any other way gets left out.

Why is Danath Trollbane standing in A Hero’s Welcome in Dalaran?
I thought he died.

I did too! I was crazy surprised to see him, I figure maybe they realized that since he doesn’t appear much after that opening bit that they needed to put him somewhere just so we’d know he wasn’t dead. Hopefully he’ll actually do something soon, he’s been sidelined for a really long time now.

Q4tQ: Mage Tower is winning big, at least in NA. Do you think it’s mostly due to the Solo Challenge or the 30% rep gain, and do you think Blizz nerfs/moves one of those?

It’s kind of a crazy combination. Everyone wants rep faster, everyone wants their solo challenge artifact skin. Putting them both on the same tower guaranteed it would be ahead, I think. I suspect at this point they won’t change it just because people have spent resources and they’d probably riot if they suddenly felt like those resources were wasted.

Okay, that’s the Queue for this Friday. I’ll see you all Tuesday.

Blizzard Watch is made possible by people like you.
Please consider supporting our Patreon!
Filed Under: Bracers, Class Fantasy, Wardrobe
Advertisement