Know Your Lore: Dawn of the Arakkoa 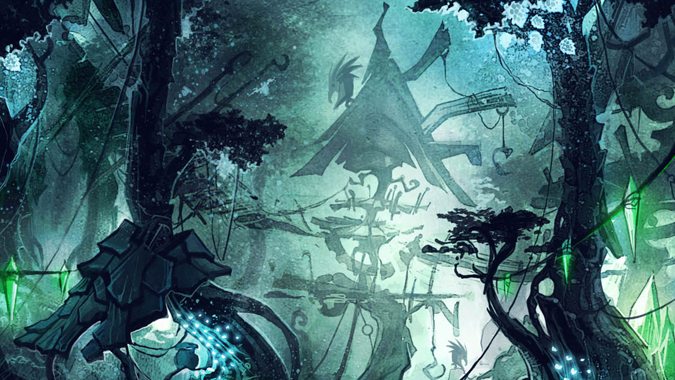 When the last of the Sporemounds was defeated, spores teeming with the Spirit of Life seeped into the rest of Draenor. This eventually resulted in new species of Breakers, and new species of Primals. But it also meant that Draenor’s animal life received a boost as well. Initially the Sporemounds and Evergrowth pretty much overtook and consumed the majority of Draenor’s fauna. In the wake of the Evergrowth’s destruction, that fauna was finally given room to grow.

And just like the rest of Draenor, the first animals that spawned from this overabundance of Spirit were gigantic and powerful. Some tapped into Draenor’s elemental energy, others displayed an affinity for natural magic, and others even showed promise with the powers of Light and Void. It wasn’t about to last, however. Between the development of the Botani and giants like the Gronn and Ogron, these animals were hunted down to near extinction.

The exception, of course, was the creatures that had developed wings – those capable of soaring far above the reach of either Breaker or Primal. 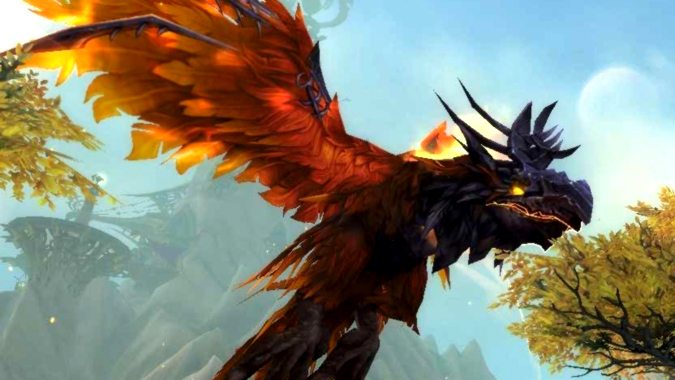 The winged creatures of Draenor flocked to Arak, where the terrain proved to be the most advantageous. At the time, only one massive stone spire towered over the rest of the region, casting a shadow over the dense woods below. Three almost godlike creatures eventually developed in Arak – Rukhmar, Sethe, and Anzu.

The fire bird Rukhmar displayed a peculiar connection with the Light, and was able to summon enchanted flames that could either nourish or destroy life at a whim. In contract, the great leathery serpent Sethe cleaved to the shadow and the energies of the Void. And Anzu, smallest of the three, was also the most clever – he displayed an affinity for the arcane magics of the world. It was Anzu who eventually dreamed of a better future for his winged kin.

With that in mind, Anzu called on Rukhmar and Sethe to carve a sanctuary out of Arak, one suitable for all birds and winged creatures. United, they drove both Breakers and Primals from Arak, and the region soon flourished into the safe haven Anzu had envisioned. Rukhmar developed an affinity with the kaliri birds of the region, Sethe ruled over the wind serpents, and Anzu watched over the clever ravens, each a god in their own right. 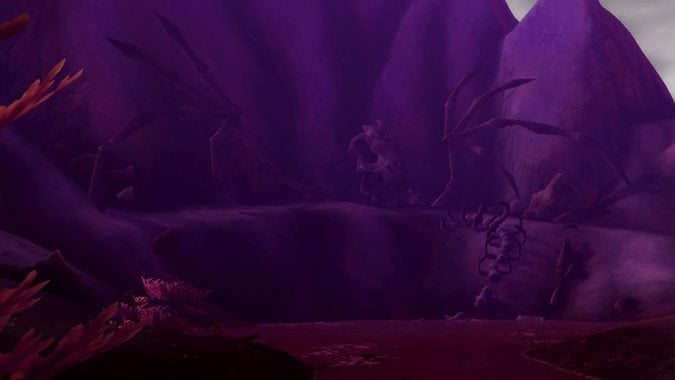 Rukhmar soared above them all – arrogant, she considered herself the pinnacle of beauty and grace, and never deigned to touch the ground. Sethe and his followers made their home in the shadows surrounding the base of Arak’s only spire. And there, he seethed with envy. He and his kin were doomed to always live in Rukhmar’s shadow, and he couldn’t let that stand. So he came up with a plan to steal Rukhmar’s powers for his own – but he knew he couldn’t do it alone, and sought out Anzu for help.

Sethe assumed that Anzu felt the same way about Rukhmar as he did – envious of her power and fed up with her arrogance. Unfortunately, he was mistaken – Anzu didn’t hate Rukhmar. In fact, he loved her, secretly and from afar. He’d never dare confess it to her; he knew she’d never accept him as her equal. But neither would he let her come to any harm – so when Sethe came to him for help, Anzu promptly went to Rukhmar and warned her of Sethe’s foul plans.

And when the day of Sethe’s attack dawned, Rukhmar and her fiery wrath were ready to counter it. Harnessing her powers, she burned Sethe’s wings to ash, sending him plummeting to the ground below. When Sethe fell, he found Anzu waiting for him – and the dark bird quickly tore out Sethe’s eyes. Furious and betrayed, Sethe used his last breaths for vengeance, weaving a dark curse through his followers and the land itself.

Anzu saw this, and realized there was only one way to prevent the spread of the curse and the destruction of Arak. 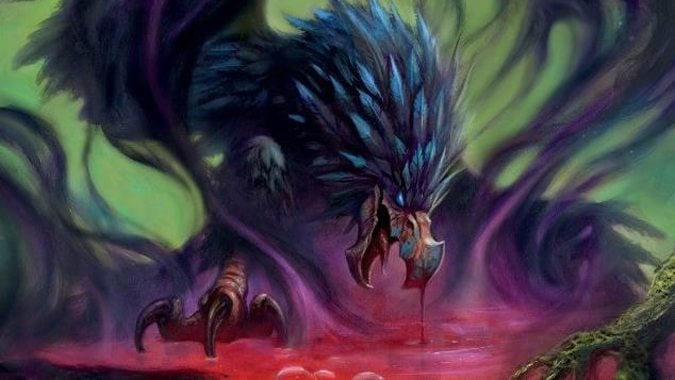 Left with no other choice, Anzu devoured Sethe whole, absorbing the curse and Sethe’s dark energies into his own body. The result changed him forever – the curse shrank his body, twisting it and rendering Anzu flightless. But Anzu succeeded in containing it, with one small exception – the area where Sethe had fallen. The last of Sethe’s blood did not spread, but it seeped into the ground, tainting the region that would eventually be called Sethekk Hollow.

Ashamed of what he’d become, Anzu hid among the forests, ignoring Rukhmar’s plea that he show himself. He knew he would no longer be worthy in her eyes – he could no longer touch the skies. Anzu saved Arak, but in the process he’d become an aberration, disgusting and forever earthbound. But devouring Sethe had another unexpected side effect. It gave Anzu a portion of Sethe’s power over darkness, allowing him to cloak himself in shadow.

Eventually, Rukhmar gave up the search for Anzu. Grateful and humbled by Anzu’s sacrifice, she was still worried and horrified by the curse that lingered in Arak, and left the region entirely. Eventually, she settled on Gorgrond’s highest peak, where she considered her options. There was no way to find Anzu, no way to properly thank him in person for what he’d done. 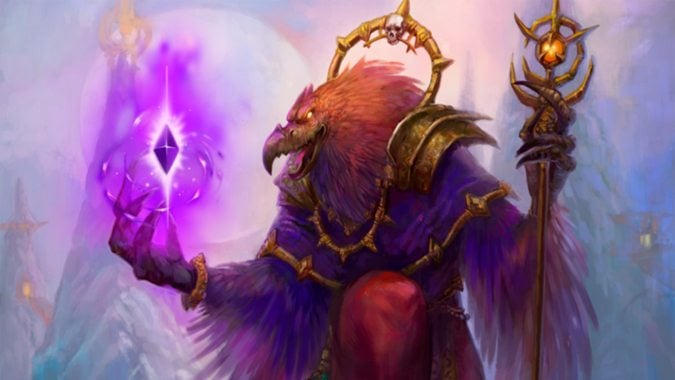 Birth of the Arakkoa

But Rukhmar still had her followers – and she possessed the means to shape them as well. So she crafted a new race from the kaliri, a tribute to Anzu and all that he had been. They possessed her grace and beauty, and Anzu’s intelligence and cleverness. Rukhmar named them the Arakkoa – “heirs of Arak” – and fully intended for them to return to Arak one day.

Before that could happen, the Arakkoa would have to prove worthy – Sethe’s curse still lingered in Arak, and Rukhmar didn’t want her new children to suffer from it. Over the years, watched the Arakkoa develop and grow, occasionally reaching out to tell them tales of what had happened. They learned of Sethe’s betrayal, of Anzu’s noble sacrifice. And eventually they learned the ways of Light magic as well, quickly mastering it.

To the Arakkoa, Rukhmar and Anzu were both deities in their own right. Rukhmar was the goddess of the sun, Anzu the dark god of the shadows. They continued to both study and worship, eventually discovering arcane magic just as Anzu had and mastering that as well. The Arakkoa continued to flourish and grow, all in the name of one day returning to the home for which they’d been named.

Unfortunately, Rukhmar would not be joining them on that journey.

Rukhmar expended a great deal of energy bringing the Arakkoa into being, and she knew she’d never be the same again. She could feel herself growing older, her life force slowly fading away. Eventually, she felt that life force fading entirely, and she reached out to her children one last time, urging them to travel with her and claim Arak. Together, they soared south. Upon reaching Arak, Rukhmar took her last breath, and flames consumed her, her body burned as if it were a second sun in the sky.

Rukhmar was gone. But her legacy would live on. The arakkoa took her death as a sign of their own ascendance, and quickly vowed to create a vast civilization in her honor, one as bright and powerful as she had once been. Claiming the highest reaches of Arak’s spire, they began to build their home, wielding the magic and cunning that Rukhmar had bestowed upon them at the hour of their creation. They called themselves the Apexis. They would rule Arak from the majesty of the skies, outshining any other culture on Draenor.

The Arakkoa truly were one of the greatest races to develop on Draenor – which makes their fate on Outland even more poignant. The land they once ruled simply…doesn’t exist anymore. It was blown to pieces when Nerzhul shattered the world. The Arakkoa left on Draenor’s remnants are twisted creatures, flightless and possessing none of the grace or beauty Rukhmar had once bestowed upon them.

And the tales of Rukhmar, Sethe, and Anzu faded into legend, barely understood by any of Outland’s surviving races. The remnants of Draenor’s greatest civilization were left to eke out an existence haunted by lingering memory, acting out echoes of what once had been in fruitless plays for power and domination. 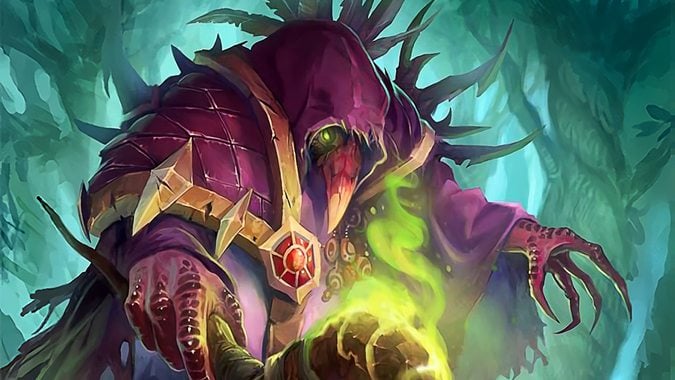 The mighty Apexis civilization is long gone. But echoes of that time linger still in Draenor’s shattered peaks and valleys. We didn’t really have the full picture of what had happened to the Arakkoa in Burning Crusade. All we had were remnants of what once had been, puzzle pieces that didn’t quite fit together. It made the Arakkoa fascinating, but also incredibly difficult to understand – there were hints at what had happened, but we didn’t really have the entire picture to work with. We didn’t grasp the sheer scope of their influence on the world.

Of course, neither did the Arakkoa. Next week, we’ll take a look at the rise and fall of the Apexis, and the civilization’s wide-reaching influence on Draenor.