The Queue: Cloaked in darkness 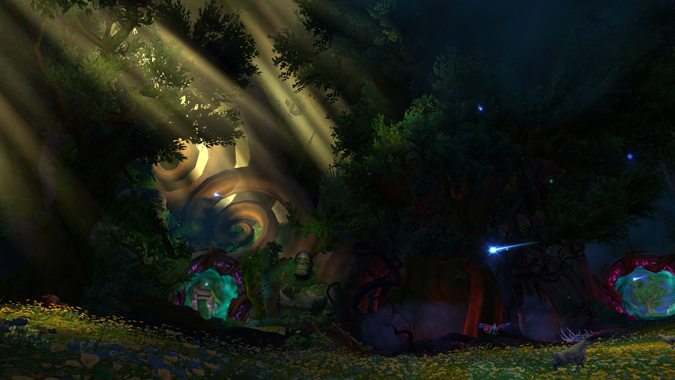 I think the Inky Black Potion takes the “Coolest New Thing” award for Legion. I mean people have been asking for darker nights for years, and now they have a way to get it. The Dreamgrove is absolutely beautiful — but that’s the case for pretty much anywhere with sunshafts. If you haven’t gotten yours yet, be sure to hit up Rona Greenteeth at the Darkmoon Faire before it disappears for the month and nab yourself a stack or two.

Q4tQ: When will the champions of legionfall part of the campaign unlock?

We’ll be seeing that one next week — the campaign is on a timed release that’ll be unfolding over the next several weeks.

Here’s a fun Q: where do you suppose those portals on the opposite wall of Violet Hold go? (Behind the two archmages that do the weekly quests and sell you seals.)

Oh those aren’t portals, those are displays! Back in Wrath of the Lich King, both of those NPCs sent you on quests to kill either a raid boss or a dungeon boss. The boss they required would be displayed in that panel, sort of like a hologram. It was just a quick and flashy visual reminder of where you needed to go that week.

Question for the Queue
Do you think our characters can function in times of peace?

My paladin would have work cause would need someone to hunt down the warlocks and shadow priests. However can’t think of another character that would have anything to do in peace time.

I feel like peace time would be a great time to take a good, long, hard look back at everything we’ve wrecked over the course of making Azeroth a better place and trying to fix it. I mean I figure by now there’s how many continents that could use a helping hand? Maybe that’s not a job for everyone, but it’s plenty to do for those interested. Priests and Paladins would obviously have healing to do, Shaman and Druids would be looking at restoring all the natural damage, I feel like Warlocks and Death Knights (not to mention the Forsaken in general) would be busy looking for a purpose, Mages would be busy calming all the magical turmoil that has doubtless popped up with Azeroth’s ley lines over the years — I mean, it’s not like there’s a lack of things to do. Those things might not be as exciting, but they’re tasks worth doing, you know?

Are there any quests to destroy Legion airships on the Broken Shore, or do they just hover menacingly overhead and portal demons down?

Not exactly. You kill demons that spawn from portals and get stones to summon more portals to kill more demons, or empower the demons that come through the portals so they get perpetually more powerful, and it’s basically a Burning Legion slaughterhouse until someone eventually gets a purple stone that summons a boss for that region. When you defeat the boss, the ship despawns for a short period of time, then hops up somewhere else.

It’s kind of satisfying, in its own way. You get a pile of nethershards while engaging in all the demon slaughter.

Anyone know how Compendiums will work past AK25? At the moment to get to AK26 and start researching more ranks you gotta unlock the Broken Shore and do the quest chain, but what happens in three months when we can buy an AK40 Compendium and we get a fresh 110 alt? Can they use it to get past AK26 without doing the quest or do they have to get AK25 first, do quest, then use the Compendium?

We don’t actually have that information just yet. I’m assuming that we’ll hear more once we get to that point. So far Legion‘s been pretty good about not punishing us on the alt front and letting us get those alts caught up without too much hassle, I can’t imagine they’d leave us hanging at the end of an expansion. But I also think there are other, more current and pressing issues they’re thinking about right now — I mean the raid hasn’t even opened yet and there’s a big campaign to play through.