The Queue: A Chicken with Teeth 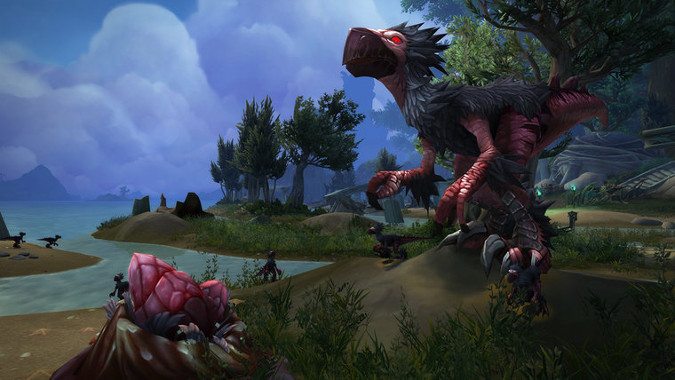 I’m not sure how this will end but I can hope we’ll end up with rideable giant chicken-dinosaurs, I guess.

Q4TQ: How do you unlock the additional artifact traits for off-specs past 35? I was thinking about going BM but the quest chain only unlocked my MM additional traits.

I know I could google this but I’m being lazy…

First, get all your off spec artifacts to 35 traits.

Second, do the quest chain for the spec in question. For example, I have the Arms and Fury artifact quest chains and I’m working on them. My prot Artifact is at 34 traits so I don’t have that quest yet. That’s pretty much it — go to the Council of Six, they should have a few quests for you.

Q4tQ: How much Blizzard currency does a token give you for other games? And how do I put a token towards my Blizzard balance instead of just using it for WoW subscription time?

This got answered in the comments but I figured it’s an evergreen question, there will be someone today who will want this information. All answers are in US currency.

A WoW Token is worth $15 in terms of your Battle.net balance. So, if you buy ten with gold, that’s $150 worth of Hearthstone cards or Heroes of the Storm skins or heroes. The reason this is profitable for Blizzard is became someone spent $20 on that token, so when you spend your in-game gold to buy WoW Tokens, essentially you’re getting $15 worth of balance and Blizzard gets to pocket $5.

When you use a token in game, it prompts you to decide if you want to use it for game time or to apply it to your balance.

Special thanks to Archmage RC and Mistah Jay for answering the question yesterday and providing links to Blizzard’s official thread on the subject.

So does the xp from heirlooms stop when you out level them?

Q4TQ: Does anyone else feel like the ‘perk’ from the Nether Disruptor building is kind of lack luster? Aside from being able to pick up the profession quest, which I guess is like any other quest, I wouldn’t have even noticed it was up…

There are four world bosses that spawn on the Broken Shore when the Nether Disruptor building is up. They drop ilevel 900 gear, so if you do those bosses, you have a chance for a reasonable drop (especially if you’re not in a current heroic/mythic guild). So it seems like a reasonable tower to build to me.

Q4TQ: Do you have any characters where you feel like you just can’t get the transmog right?

Nothing looks right on Blood Elves. My Belf Warrior looks silly no matter what I do with her. No armor, no weapon looks right and it drives me insane. I’ve deleted two Belf Paladins (both above level 70) because I just… could… not… make… them… work.

I’m enjoying playing a Tauren again, though. Tauren look awesome in anything plate.

Those quest chains you get when you have 35+ artifact traits and can up grade your artifact: I did all three on my DK, and they were great. Then I did one on my hunter, and enjoyed it. I was like, “This is so cool, they have 36 different quest chains! I have to see them all!” Did guardian druid this weekend, it was identical to the blood dk’s. Oh… there aren’t 36 different ones. And the more I do, the more repeats there will be.

How many different quest chains are there? Do all tanks have the same one?

The way they’re set up, no class will ever duplicate a quest, but specs that perform the same role can. So there’s only 1 tanking quest because no class has 2 tank specs. But there has to be 2 healing quests because both Holy and Discipline are considered healers, and if there weren’t two then Priests would only get one quest. Since we have Warlocks, Hunters, Rogues and Mages as Pure DPS (meaning that each of these classes have three separate DPS specs) you need at least 3 different DPS quests, and since many classes have at least 2 DPS specs (DK’s, Warriors, Druids, Shaman) having an extra DPS quest makes it easier to differentiate between different DPS specs in the same class. (I know Survival Hunters have the same quest as Arms Warriors, for example, so there’s also an attempt to put Melee with Melee)

That’s the Queue for today. I hope everyone has a good week.

Blizzard Watch is made possible by people like you.
Please consider supporting our Patreon!
Filed Under: Falcosaur, Teeth, Tooth
Advertisement