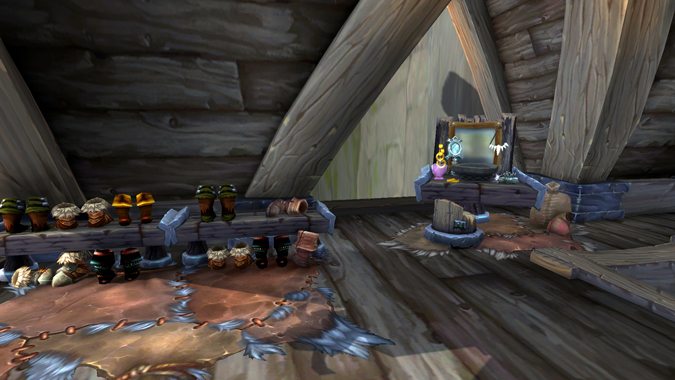 Somewhere in Stormheim there exists a Vrykul who has a killer shoe collection and a vanity worthy of any beauty vlogger. Did they build this cozy hideaway out of shame, or because they needed someplace free of distractions and possible disruptions to their recording sessions? More importantly, where can I catch the next Valarjar Emissary cache unboxing vid?

Q4tQ: this one is for Anne, or a similar lore-buff. Do all race/nations of the Alliance have their own intelligence agency similar to SI:7?

I like to think that since each of the races involved have been around for hundreds, if not thousands, of years before humanity became the powerhouse it is today, the answer is yes. We just don’t know anything about them, because they haven’t chosen to share that kind of information. Speaking from the standpoint of known lore, however, the answer is that we simply just don’t know — we’ve never seen anything pop up that directly referenced that kind of thing.

Q4tQ: Should Tarren Mill vs Southshore ever be a Heroes map (either with or without a 40vs40 player option)?

That’s…actually not a bad idea. Not the 40 vs 40 aspect — that would be completely insane in a Heroes match — but the map itself. One side starts in Southshore, the other in Tarren Mill, there are towers scattered across the map to capture, that sort of thing? I could see that working. It wouldn’t be a bad map — maybe a little boring, visually speaking, but still not a bad map.

Q4TQ: While running Tempest Keep yesterday for transmog I noticed that some of the NPCs were called “Crimson Hand”. Is the “Crimson Hand” actually discussed in the game, because I don’t recall seeing them elsewhere.

The Crimson Hand were Kael’thas’ elite guard — basically the most loyal and the last line of defense. Presumably, they all met their end once we stormed Tempest Keep and defeated everything inside, although there’s no direct confirmation for that one. I don’t think there are any members left living these days — I suspect if any loyal followers were left behind after his defeat, they were ushered along to the Isle of Quel’Danas and transformed into the felblood elves you see wandering around in Magister’s Terrace and the Sunwell.

Lore Q4tQ: So what is the state of the Bloodtotem tribe? Did they all ally themselves with the Legion and become Feltotem or are there some who refused and survived? I know we see regular Bloodtotem in Stormheim, but they are still hostile to players.

They were renamed to the Feltotem when they allied with the Burning Legion. If any refused, I imagine they abandoned the tribe name altogether, and possibly joined one of the other Highmountain tribes instead. The Bloodtotem name has pretty much been irrevocably tainted at this point.

Does anyone think that parts of Density 2 may make it’s way into WoW. Density 2 seems much faster paced and more graphic intensive then WoW. It might me interesting.

I’m still hoping for some VR stuff from Blizzard.

Not even a little. Bungie and Blizzard are still two completely different studios. All that’s happening here is that the PC release of Destiny 2 will be tied into the existing social network Blizzard has already created with Battle.net. So people playing Destiny 2 will be able to chat with friends, stream gameplay, the whole social shebang — but the game itself is still a completely different animal.

It’s sort of like Steam, in a way — I can (and have) pick up both Dragon Age Origins and Fallout 4 via Steam. I can chat with friends using the Steam app if I want to. But Bethesda isn’t going to suddenly start working on BioWare games, or vice versa — they’re still two separate entities, with separate games and separate design teams.