I should first point out that I’m using the MMO-Champion’s and Wowhead’s 7.2.5 patch notes because Blizzard hasn’t put out their own yet, plus I logged onto the PTR myself and tooled around on a Horde Arms Warrior. My initial impressions on the changes are that I can’t tell what Blizzard’s overall goal is — especially since there aren’t any official patch notes to tell us what their goal is. Clearly they wanted to make Titanic Might less of a must-have ability, but I’m not sure they’ve succeeded.

Essentially it’s an attempt to change the talents people take by rearranging and buffing abilities:

But Trauma is significantly buffed, with Slam, Whirlwind, and Execute now adding the Bleed to targets. This means you won’t have to keep hitting Slam when a boss is in Execute range to keep the bleed up (or, rather, means you’ll be more likely to get Trauma, especially at the level 3 tier). 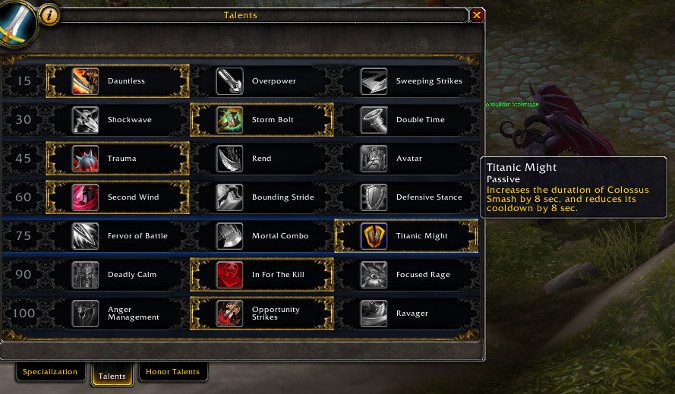 It’s not just that talents were moved around, though. In For the Kill is entirely different now. Instead of refunding rage when your target is below 20% rage (i.e. Execute range) it now buffs Colossus Smash, giving you 15% haste for 8 seconds after every CS. Being a fairly haste-loving spec, this makes In For The Kill pretty attractive. Rend doesn’t change positions, but it now does less up-front damage and more damage over time based on AP, which seems rooted in scaling the talent with gear.

The change to Titanic Might seems based around the fact that with the live version you can essentially have CS up forever. This version will reduce uptime to about half the time you’re in combat, minus procs. With the current Titanic Might a CS proc is almost meaningless, but with the change Tactician will seem more important as reset Mortal Strike/Colossus Smash combos will likely be very meaningful. (Especially since putting Titanic Might on the same tier as Mortal Combo almost guarantees you’ll never take Mortal Combo — you’re going to take Fervor of Battle if you’re expecting to have to AoE a lot, and you’re going to take Titanic Might otherwise.) 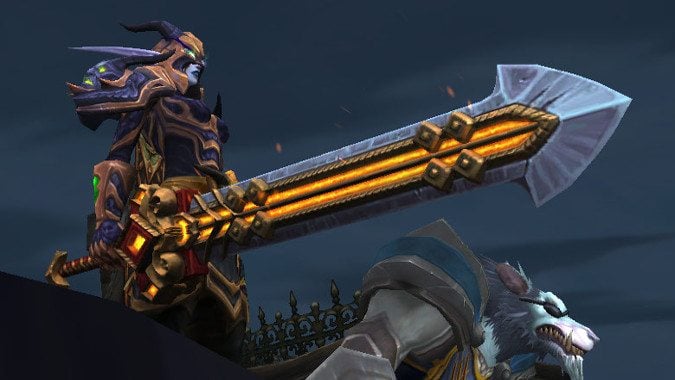 Focused Rage at 90 puts it up against that 15% haste from In For The Kill, and I don’t think it’ll win. It really depends on how much rage you have to spend and how many attacks you can get off during a CS window with that rage. If you’re waiting for Tactician to proc, you could choose Focused Rage over Slam, it’s dependent on what you think works better for you.

The changes to Opportunity Strikes and Ravager both seem aimed at making them competitive with each other. I’ll be honest, I’ve no problem with leaving Bladestorm as it is — targeting an area with Ravager just seems like more hassle than is necessary. I guess if I knew I’d need to AoE an area that was about to be hit by boss AoE or something I’d be more likely to take it. I think with these changes Opportunity Strikes stays ahead.

So yes, Arms saw a lot of changes. On paper it’s pretty daunting. In practice you’ll take ten minutes max to look over your talents, decide what you like best and go. I think most Arms Warriors will shrug, make a few tweaks (Trauma absolutely crushes Rend in my opinion, but maybe if you have an absolute ton of attack power you’ll like Rend more) and keep on keeping on.

Changes to Fury and Protection

Fury Warriors see a couple of changes. Frenzy gets a slight buff, going from a 10 second duration to a 15 second duration. The real news here is that Fury sees a 10% buff to all damage across the board:

That’s a small buff, but it’s to everything, so it’s hard to feel negatively about it.

Prot gets a very small buff to Spell Reflection, allowing it charges. Since it’s currently set to 1 charge with a recharge time equal to its live cooldown, I’m not sure why they bothered, but I’m hoping it will stack in some way. This is the PTR, after all.

There are no current changes to the Protection Artifact traits, but Juggernaut in Fury gets a slight buff, increasing its duration to 8 seconds (up from 6). It’s otherwise unchanged.

What do these changes mean?

These changes are in part aimed at compensating DPS Warriors for the nerf to Draught of Souls on the PTR. Do I agree with that nerf? No, but it’s coming, and so they did absolutely need to buff DPS Warriors. Have they gone far enough yet? No. But we’ll see how the PTR ends before I panic and start throwing things.

There’s a lot more to the PTR — new Legendaries, changes to current ones — and we’ll be looking at them in another column. For now, the breakdown is that Arms is still playable, Fury gets a small buff, and both specs will likely require more to make up for the huge Draught of Souls nerf for Arms and Fury Warriors.