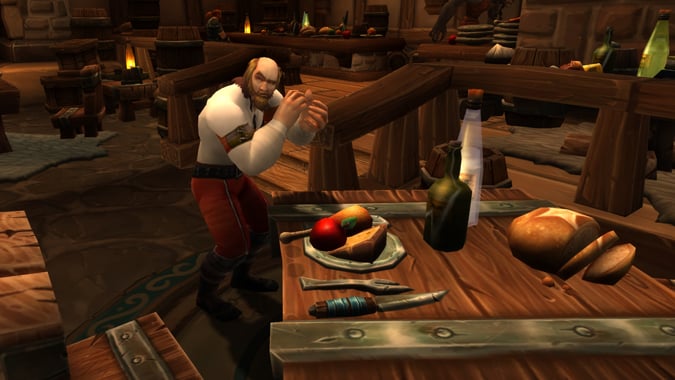 Remember me, dear Queue? We used to have such fun together. Taking those long walks on the beach in the falling sun and rising moon, sharing laughs over the hilarious misadventures of Anduin and whomever he’s teamed up with this expansion, all the while chatting food and more.

In terms of look alone, what’s your favorite artifact skin?

I’m very very partial to the hunter bow; Thas’dorah. When applied with the green skin and a green transmog outfit, you’re looking exactly like a hunter in nearly all of fantasy fiction. You’re one with the forest, carry a powerful weapon, and blend in with the tress and nature around you. You are the silent stalker that reins justice from afar with a well placed arrow.

I get it that I might have gone a touch overboard there, but that bow, the outfit, and the playstyle really mesh well together, making it my favorite skin.

A close second would just be plain old Ashbringer… because what else is there.

And even though this wasn’t asked, on the subject of ones that I hate; it starts and ends with every single Mage artifact weapon skin.

Are all your editorial and personal opinion pieces going to be locked behind a paywall?

Those were always my favorite pieces on the site and a $5 a month donation to read them is just not financially feasible for me at the moment. The occasional editorial being available for everyone would be great. Not all the time just every now and again.

Nope, not by a long shot. Can I put on my CEO and publisher hat here and talk business?

Blizzard Watch needs to produce, right now, free content every other hour between 8am and 8pm. That’s 7 pieces of free content each day, 35 pieces a week, and about 140/month. What I’m aiming for with Patreon is that we do about an additional 30/month that go towards our supporters.

I hope that these benefits will increase our available funds such that we’re able to post new free content from 8am to 8pm every hour, meaning 13 free pieces of content a day, 65 pieces a week, and about 260/month. And we’ll still do about 30 pieces of additional content per month that goes to our supporters.

I hope to see that the added benefits for subscribers will lead to added benefits of everyone. It’s something I pretty strongly believe will be the case; otherwise I wouldn’t be doing this and would have sold Blizzard Watch to a company that can sell tons of direct ads and make the business about that instead.

But we’re here and have Blizzard Watch 2.0 because I really do think this model can succeed.

Is there a glyph for removing the three fiery orbs around a fire mage? I have a faint memory of such a glyph but I can’t remember what the name is.

I’m actually really glad you asked, and subsequently answered this yourself, Shana. It’s been bugging me for a bit as well. And as your answer says, you can talk to Archmage Melis to turn them off. Kudos to the fourms.

Do you use beans? Do you feel like it’s still okay to call it chili if you do?

For some reason this is always a sticking point with people. I use beans in my chili. It’s not like I’m using just beans; there are plenty of other proteins that I use as well. Steak, beef, chicken, turkey, duck, lamb — you name it, it’s been part of my chili.

I submit to you, my friend, that a chili without whatever is available in the kitchen is not a true chili, but instead a constructed reality befit of those forced to watch the shadows on the wall without ever knowing the true gastro masters crafting their hyper reality interpretations (Bourdain says it is true, thus it is; knowing this is a false axiom represents becoming unchained from the straps of bondage  in the culinary world). This failing of the epistemological construct of a true chili leaves a skeptical nihilistic taste in one’s mouth that would make even Nietzche tear up. Truth is in the eye of the mouths of which eats the food; not beholden to some inherent system that forces a definition of power over one’s food.

I also want to answer Gendu’s question of “Are you a bratwurst purist, or are pizza brats and bacon-cheddar brats still okay?”

I am far from a purist here. Any sort of stuffing inside that magical wurst wrapping is perfection. You may find me weird, but I’m one of those that wants to know what my bratwurst is made of. There are some butchers in Minneapolis that I have personal relationships with that can give me all these details. They do the work of titans.

So what happened to the queue?

As part of Blizzard Watch 2.0 we’re going to stop weekend posting for a while to allow all our writers to have time off on the weekend to do other things. It also gives me time on the weekend to do site improvements and other monkeying around that I couldn’t otherwise do with active staff.

This does not mean less content though; just more content back in the weekdays. We’re making sure of this.

Q4tQ: does anyone make an adjustable GPU strut? Mine’s bending bad and the fan I believe is sagging against the sound card.

Someone’s mentioned before using Lego and building one, that could probably work. Put a silicone dot on both ends for traction…

I haven’t seen one, but I have added a 1/2″ dowel with superglue on the bottom of the case so that it held the card up but wasn’t touching any other components. It honestly bothers me whenever I hear about this; for two reasons.

First, I don’t think most people look and realize their graphics cards are sagging down and possible disrupting airflow and even other cards.

Second, what the heck were the people making these things thinking… they’re heavy and up until two years ago most didn’t have the proper structural support.

This issue is brought up far less often than it should be.

Blizzard Watch is made possible by people like you.
Please consider supporting our Patreon!
Filed Under: Artifact Weapons, Blizzard Watch 2.0, Chili
Advertisement