The Queue: This pear, so delicious 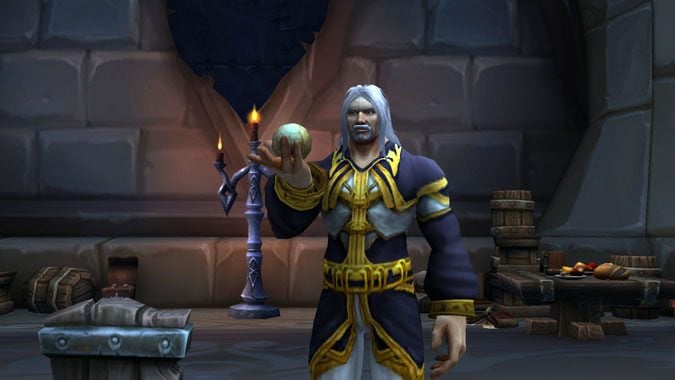 I have to say, despite the hassle at the end, I really enjoyed the Rogue class mount quests. They made me remember why I like playing a Rogue so much — skulking around in the middle of places I definitely should not be. It took a little longer than expected to carry out the last leg of the mission, but it was totally worth it.

…I don’t think I’m going to show my face in Stormwind again for a while, though.

If you unlock the class mount on your main, does it unlock for your alts?

An excellent question! If you have alts of the same class, then yes, it will unlock for those characters. If I had another Rogue, they would have that glorious raven mount. However, if you have alts of different classes — like my Hunter and Shaman — you still have to complete the Broken Shore campaign and do the associated class mount quest chain for that class in order to unlock the mount.

Q4tQ: Did Garrosh need glasses? In Trial of the Crusader he got mad at Wilfred Fizzlebang for summoning a demon against the Horde even when it’s the Alliance fighting in the arena.
He then proceeds to demand justice for this attempt on Horde Alliance soldiers. Maybe the end of MoP and WoD happened just because Garrosh literally could not distinguish friend from foe.

{PB}At that point in the expansion, Garrosh was just looking for a fight. He didn’t care how he had to pick that fight. All he saw was an Alliance member — Wilfred — summoning a demon, who promptly turned around and squished said Gnome flat. If the champions hadn’t been able to take Jaraxxus down, he would have had a field day with any spectators. So in Garrosh’s eyes, it was the Alliance deliberately allowing one of their own to summon something with that kind of power in what was supposed to be a “friendly” tournament.

That and like I said — the guy was seriously trying really hard to start a fight. Remember, this was post-Ulduar, and you got a good look at exactly how Garrosh felt about Varian in the accompanying cinematic for that raid. He just wanted an excuse for round two.

VINDRIOS OF THE HILL FOLK ASKED:

Q4TQ: 1) Do you ever name your mounts? (just for head canon or funzies) and 2) Would you like it if WoW let us name our mounts in the UI (similar to our battle pets)?

I have one character who has names for almost all of her mounts. Her favorite is a wolf named Mr. Fluffington. She’s a Forsaken. She’s also a little weird. But to answer your second question, I’d love it if we could name our mounts like we can name our pets. The only issue with that is that you don’t normally see the name of a mount displayed anywhere while you’re riding it. With Battle Pets, they pretty clearly have a name when you target them. When you’re riding a mount, it’s your name that’s displayed. So while it’d be fun, I don’t know how useful it would actually be, you know?

Question for the Queue: does every single class mount count towards the get 400 or how many mounts achieve our is it only the one that the character can ride? Like if I have 348/400 mounts and I get the class mount for both my pally and shaman will it go by two or one, if that makes sense.

It’s just the mounts that that character can ride. Class mounts — like the original Warlock felsteed or Paladin charger — only count towards the character that can ride it. So if you get both of those mounts, you’ll be at 349 on both your Paladin and your Shaman. It’s a little confusing, but if you’re going for the mount achievement, the number shown in the achievement tracking pane is the correct one for the purpose of the achievment — the one on your mount collection panel is the cumulative between all your characters.

Q4tQ: Is there a way to hide your weapons temporarily in the transmog window so you can actually see your armor? My DK swords are getting in the way

Unfortunately no — if you really want to hide them, you’ll have to take them off before you open the transmog window. The same applies to the dressing room, and while I understand why they’re showing — I mean, you want to be able to see if you’re going to transmog your weapon after all — I do wish there was an option to hide them. Like a box on the UI you could just check to turn them off for the time being, so you can get a look at your other set pieces.