This one’s a bit to unpack. Let’s start with some tweets from CM Lore, aka Josh Allen.

replies to this tweet are a great case study in "no matter what the change is, someone will hate it" https://t.co/cZhc9F6uH8

The tweet in question is in regards to a recent change to Artifact Knowledge past rank 26, making it take under four hours to research a new rank instead of 5 days. This change is intended to assist returning players who are excited to raid the Tomb of Sargeras, allowing them to catch up easily.

However, if like me you’ve been playing this whole time (I came back when patch 7.2 dropped) this is less an awesome change and more an annoyance. Returning players get rewarded, and those of us who played the 7.2 content got to spend days at a time between AK ranks. I’m not truly put out by this so much as I’m irked by it. Why couldn’t this change have come in with 7.2? Why did I have to spend days at a time while players who haven’t been playing basically get that AK in a fraction of the time?

Ultimately, my reaction illustrates Allen’s point for him. There really is almost no way to make a change to a game’s design that’s going to please everyone.

the reality is just that tons of people play WoW, all with different viewpoints. What's positive for one group is negative for another.

I once wrote an article (now lost to the wind and ghosts that devoured the site I wrote it for) that made the point that personal player experience isn’t universal. For every group that enjoys a raid, another group will dislike it; for every group that thinks the content is taking too long to drop, another will be panicking that they’re running out of time with the current content. What this Artifact Knowledge change does isn’t even actually harmful to me: I’ve already earned that AK, so this change has no actual bearing on my gameplay.

It just annoys me, and even that annoyance is purely of the “In my day, we had to wait five days for a single rank of AK” variety. It’s a curmudgeonly response.

{PB} But the nature of WoW or any game with this big a player base is that any change is going to rub someone the wrong way. The developers’ goal must always be to make the best possible change for the majority of players while negatively impacting as few as possible. In this case that’s been the result — those of us who ground out AK when it was five days a rank aren’t actually hurt, and new players returning to the game won’t have to wait and potentially raid Tomb with massively underpowered Artifacts.

The fact that some of us don’t like the change is understandable. But it passes the ‘maximum good for minimum harm’ test. Even those of us  who don’t like it aren’t actually inconvenienced by it.

The game is a hydra with millions of heads. The fact that WoW’s developers ever even come close to hitting the mark and delivering what a majority of the players like is a testament to a robust process, frankly. Legion has been a master class in how to accomplish that goal, after Warlords served as a test bed for not doing it right, and I find the idea of even small changes like this having these kinds of issues fascinating in terms of what it implies.

Imagine how much debate must go into bigger changes — the 7.2.5 class revamps for one example. There, the developers made changes that would negatively impact some players. (They forced me to change my Arms spec around and I’m still unhappy with it.) These kinds of changes are gambles, and you always have to worry that you won’t hit close enough to the bullseye:  that you’re inside the largest group of players, that you’re delivering maximum good for minimum harm. 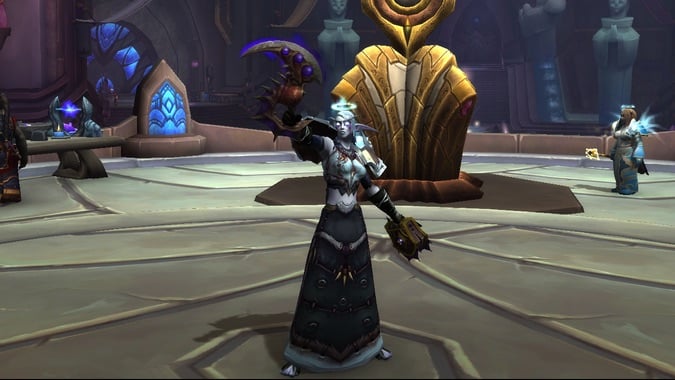 Looking back over the thirteen year run of World of Warcraft you can see this tension at work. The first tank design revamp (the Burning Crusade one) made a lot of players happy, but it also thoroughly angered others, to the point where many of the existing tanks quit or rerolled. And then once we were in raiding it turned out that all those changes that made Druids and Paladins such good AOE tanks didn’t prepare them for bosses, and all the Warriors who had been sidelined were suddenly necessary again and guilds started stalling out hard. This was a change that pleased and angered and then angered and pleased the same players — and that’s the risk with any design change to such a complex game.

In essence, the developers are playing Jenga with millions of moving parts on a lazy susan on top of a speeding motorcycle. The fact that they don’t just crash the whole thing immediately is a small miracle, much less that they ever find anyone to be happy with the game. So many players enjoying it for thirteen years deserves admiration for sheer brass if nothing else.

Whatever changes are made — streamlined talents, the introduction of or removal of talents, a new class, new playable races, flying mounts — you’ll never please everyone, and there will inevitably be affects that you don’t immediately foresee. That’s part of iterative design. The best you’ll ever do is to get as close to as much gain as possible for minimum loss.