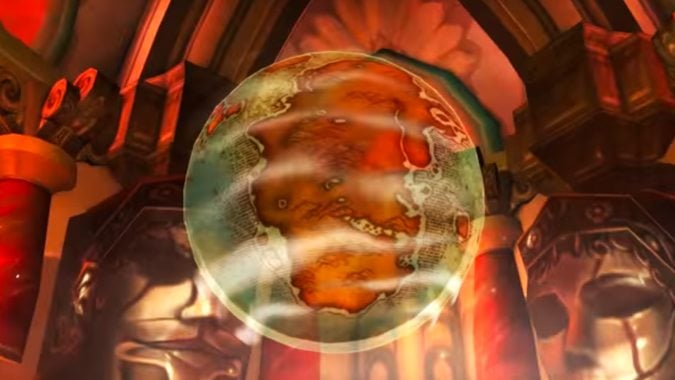 Continuing the theme of delving into ancient Titanic vaults, in patch 7.3 we have a brand new scenario with Magni Bronzebeard — and it seems to be the catalyst that actually prompts our expedition to Argus. In the pre-Legion comic and quest with Magni, we learned that he was now in communion with the world-soul Azeroth and serving as her speaker. She gave her first warning through him in Ulduar, directing us to the Pillars of Creation in order to seal the portal inside the Tomb of Sargeras. Though we have since done so, it hasn’t been enough. In the scenario, she sends yet another warning, directing us further to new worlds to finally to take care of the Burning Legion and Sargeras.

If you can’t wait to find out what happens, Wowhead did an entire video walkthrough of the scenario. Obviously these are all spoilers below.

In the questline, Magni tells you he’s had trouble speaking with Azeroth and he needs you to help him. Something isn’t right and is interfering with her ability to communicate. He has you to meet him at Maker’s Overlook in Sholazar Basin where the ancient Titanic halls were built to protect the world-soul. You enter the Hall of Communion, a place untouched by mortals, to help Magni reach Azeroth.

Of course, it wouldn’t be a proper expedition to a Titanic vault if we didn’t set off all the defenses while we were there. After dealing with various void phantoms made physical from Azeroth’s nightmares, and reactivating her defenses, Magni sees her fears. The threat of the Old Gods and the Burning Legion haunts her, but most of all is the darkest and greatest threat to her existence: Sargeras. He is coming and we must meet him on Argus to end the threat once and for all.

What’s interesting is that while we know via the Warlock Artifact Research that the Dark Titan has been “enraptured” with Azeroth and basically intending to make her his fel bride, it seems she’s not entirely ignorant to his existence or plans. She knows he is a dire threat and is either receiving visions about him or sending them out. She hasn’t been unaware of what’s been happening on her surface either. The Amalgam of Torment we fight, devised straight from her fears, shouts lines from past Old God or Burning Legion bosses: Yogg-Saron, Garrosh Hellscream (via the heart of Y’shaarj), Il’gynoth, Archimonde, and C’Thun. Even though the heroes dispatched them, she’s still haunted by their memories. Perhaps they remain a threat still.