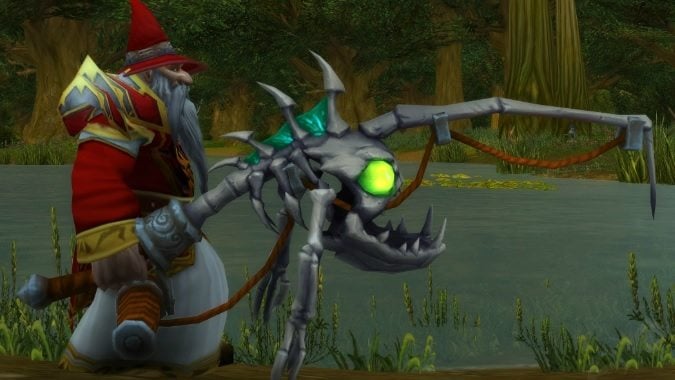 Patch 7.3 brought new mounts, pets, transmog, toys and other cosmetics to the game, but one thing slipped past our radar. It also introduced two new alternate colors to the Underlight Angler Fishing Artifact.

Five new fishing NPCs appeared across the Broken Isles last week with the patch (though one appeared a bit earlier than expected), each with their own faction grind. Only one of these Fisherfriends, as they are known, show up per day. They require you to fish up 560 rep items each. When you max out rep with each one, you unlock a special bobber for your fishing line. And when you max out rep with all five, you unlock the Fisherfriend of the Isles achievement. The achievement grants you the Underlight Emerald, allowing you to color your Underlight Angler.

There’s only a 7% base catch rate for these rep items, and each Fisherfriend only spawns once every five days. Because of this, you’d think it might take awhile to unlock the Underlight Emerald, but never underestimate the WoW community. It’s already been achieved within a week of the patch launch. That’s some dedicated anglin’. It doesn’t hurt that other rep items you can purchase from the Fisherfriends include the Ghost Shark battle pet and a Trawler Totem that grants 10 fishing skill to everyone around you.

For a guide on where to find each NPC, what they sell, and to turn into them, check out Wowhead’s Fisherfriend guide.

Blizzard Watch is made possible by people like you.
Please consider supporting our Patreon!
Filed Under: Fisherfriend Of The Isles, Fisherfriends, Underlight Angler, Underlight Emerald
Advertisement