We know what happens to our Artifacts at the end of Legion, and we have questions

It’s no secret that Artifact weapons were going to be a Legion-specific progression system. As with every expansion, the game must move on, and that usually involves ridding ourselves of all old gear. What has been a secret, however, has been how we would be ditching our gear this time around — more specifically, how we’d be taking care of our Artifact weapons. Thanks to the 7.3.5 PTR and the folks at Wowhead, we now have a pretty solid idea of what’s going to be happening to them.

Obligatory warning: There be spoilers for post-Antorus content, patch 7.3.5, and the end of Legion beyond this point.

At the end of Antorus, Sargeras does his best to stick it to the Pantheon one final time. By which I mean, he takes a massive — like, Titan-sized massive — sword and plunges it into Azeroth as the Pantheon drags him to imprisonment. The result, aside from a really cool-lookin’ sword sticking out of a now-decimated Silithus, is a mortally wounded Azeroth.

Turns out, Sargeras’ sword also carries with it enough darkness that it does more than just cut through Azeroth — it starts to poison the planet’s lifeblood. And that’s where we come in. The following datamined lines come courtesy of Magni Bronzebeard and… well, take a look for yourself, and then we’ll discuss:

The sword of Sargeras is poisonin’ the very lifeblood of the world.
The only vessels capable o’ containin’ that kind o’ power…
are the mighty weapons you wield.
Raise them up as one…. draw out the corruption from the Dark Titan’s blade!
Together, champions! For Azeroth!

Granted, this dialog only sets us up for absorbing dark energies — presumably, this leads to the end of our weapons in some fashion or another, but there’s no explicit dialog wherein Magni refers to our weapons going poof. There is, however, a cutscene labeled “7.3.5 [AWR] Artifact Weapon Retirement” which seems to make a good case for this being the end of them. In that case, I have a few questions. 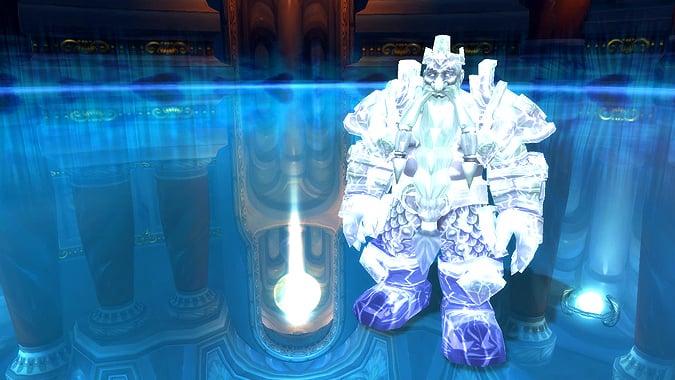 What exactly does this mean for Artifacts?

My main question coming out of this is, what actually happens to the weapons? Sure, we absorb the corruption, but does that outright destroy our weapons? Does it just render them inert? Or are they as strong as before, just incapable of increasing in power? The first would explain their absence post-Legion, but the second two would account for what happens in the interim between 7.3.5 and Battle for Azeroth.

Speaking of that interim, when does this all occur? It’s in the 7.3.5 files, but that doesn’t mean much in terms of its actual release into the game. As Wowhead points out, Antorus and nearly all of its assets were technically part of patch 7.3 — but it was only just released a week ago. So are we going to see this particular dialog and cutscene right before 8.0? Or will these happen sooner rather than later?

Heck, is this actually the final step to retiring our Artifacts? Yes, the cutscene is labeled as “retiring” them, but who’s to say it’s not just the first part of the retirement process? What’s stopping us from, say, absorbing the corruption now and having the weapons slowly decay over the coming months?

What about that one Artifact?

Yes, there’s a bit of a bias in the focus here, but even from an objective standpoint, Xal’atath raises several questions on its own. From the very beginning, the dagger has been absorbing dark energies — first with the Faceless in Tyr’s Hand and then again with the Dark Naaru in Netherlight Temple. This is a weapon that feeds on dark energy. How exactly will siphoning more dark energy into it force it into retirement?

And if it is forced into retirement as a result, why does the dagger let that happen? Again, going back to the beginning, the dagger clearly has the power to overthrow its master. Plus, it’s been around for millennia — I would think it knows its own limits in terms of what it can and can’t handle. Why would it willingly let us use it to in a way that damages it irreparably?

My hope here is that there’s some sort of individualized explanation for each of the weapons. Even if Knaifu betrays Shadow Priests by pretending to be inert when, in fact, she only got stronger, I’d be happy. But I don’t want to see every single Artifact’s retirement explained away in the exact same manner.

Each Artifact should have one final story to tell

My hope is that Blizzard takes care to explain away our Artifacts in a way that feels unique to each (or at least most). Yes, I singled out the Shadow Priest dagger above, but the expansion began with each Artifact having its own story, and it should end that way as well. Not all Artifacts absorb/cleanse/siphon energy the same way, and not all should be affected by the corruption in the same way.

I mean, I’m sure he’s okay with it, but does Thrall mind at all that Doomhammer will just… disappear (in some capacity)? Does Hati want to, like, go for one last walk before we doom him to nothingness? The Artifacts are unique. They need a unique story arc, beginning to end.