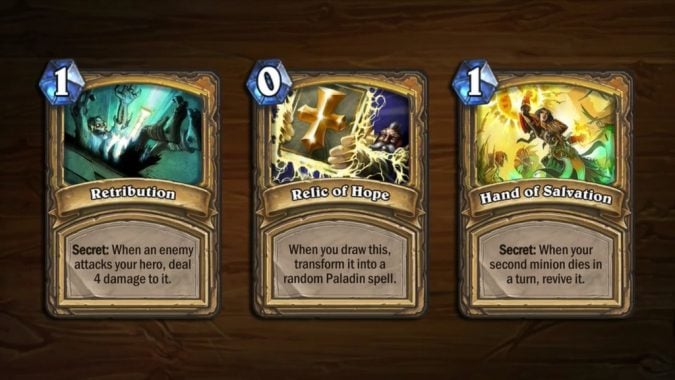 Back at BlizzCon, attendees of the Hearthstone Q&A panel were given the opportunity to choose one new card for each class, and those cards would only appear in the arena game mode. BlizzCon was a little over two months ago now, but those cards have yet to make an appearance in-game.  This has caused some players to get a touch antsy as they wonder when the chosen arena cards will actually show up. Hearthstone Community Manager Jesse Hill has finally provided some insight, stating it could still be a few months before these cards appear:

Just wanted to share a recent update from Team 5 in case anyone missed.

Recently there was a question about when players could expect to see the cards announced during Blizzcon that were meant for only the arena mode.

For any who may not be aware of these cards, there are 9 cards (1 per class) that are set to be added to arena mode. These cards will only be available in arena.

The cards are looking to be added in a few months still. Why in a few months you may ask? Well Mr. Brode provided some context on why Team 5 chooses to wait until later in the expansion cycle:

“We do it then usually because it’s when people are most bored with constructed. We just focus on making the game as fun as possible, and keeping the game fresh and interesting is an important goal for us.

Often we discuss the dip in excitement around “month 3” of the expansion cycle, and how to make the game more fun in that period. Cool events is one of those tools. Sometimes it’s an Arena event, but it was Double-Gold once too. We have some other fun ideas still to come!”

So, is everyone ready for some new fun in arena? Would love to hear your thoughts on these specific cards entering the card pool.

Waiting to release these cards until players grow bored with constructed play does make some sense. With Kobolds and Catacombs being relatively fresh, it’s most likely only the arena diehards playing that particular game mode to any significant degree. Further down the road, the addition of a handful of unique cards might coax bored players into diving back into the arena. I do wonder, though, if a mere nine cards will be enough to grab — and maintain — players’ interest.

While it’s very cool BlizzCon attendees were given the chance to pick these cards, they don’t seem like enough on their own to truly drive engagement during a game’s lull period. Perhaps they’ll be accompanied by an arena-related event to put a little more meat on the bone.

Blizzard Watch is made possible by people like you.
Please consider supporting our Patreon!
Filed Under: Arena, Blizzcon, Kobolds And Catacombs, New Hearthstone Cards
Advertisement