Spoilers: Don’t mess with Jaina in these Battle for Azeroth starting scenarios 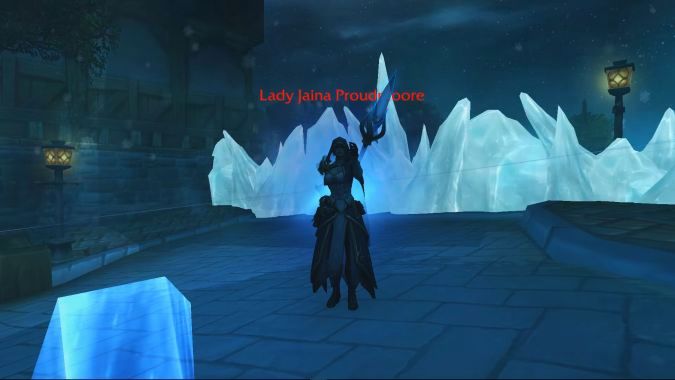 The Battle for Azeroth alpha is officially underway, and that means we’re getting our first good look at the upcoming WoW expansion. It’s a lot to take in, what with the new creature models, NPC dialog, and spell changes — but there’s about to be a whole lot more to dissect.

For a brief while on the alpha, both Horde and Alliance players could start their faction’s respective scenarios that lead them to Zandalar (Horde) or Kul Tiras (Alliance). Thanks to Nobbel and Wowhead, we have videos and dialog from these scenarios, and you can bet we’re going to break them down. They’re both very interesting and lead to some big questions, but that’s about all I can say without moving into spoiler territory — which leads me to my next point.

Not only does the following contain major spoilers for the Battle for Azeroth introductory scenarios, it’s also all subject to change. In fact, shortly after it was discovered these could be done, Blizzard removed the ability to start them from the alpha. Proceed at your own risk, and take everything with a grain of salt.


The Horde tries its best not to draw attention (but fails)

Both scenarios take place after the Alliance’s siege of Undercity. While the specifics are unclear, it looks as though Saurfang was captured during the attack. Instead of killing him — which he apparently requested — he was taken prisoner in the Stockades.

However, the Horde’s primary mission isn’t actually to rescue Saurfang — it’s to free Princess Talanji and the Prophet Zul. Sylvanas wants them as allies because of their naval fleet, but their ship was intercepted by the Alliance on its way to Bladefist Bay. This means you and several Horde figures — including those from Allied Races — have to infiltrate Stormwind and rescue the Zandalari figureheads.

You — after finding a convenient park-side sewer entrance — make it all of five steps into the Stockades before you start fighting NPCs. But the real action hasn’t really started. You briefly run into Saurfang, who is badass enough to just say, “Take me to your boy king” to some guards and get escorted out of the Stockades. You, however, are not as lucky and once again need to get past some NPCs, find a sewer exit, and return to your sneaky ways as you try to make it to a Zandalari boat in Stormwind’s docks. 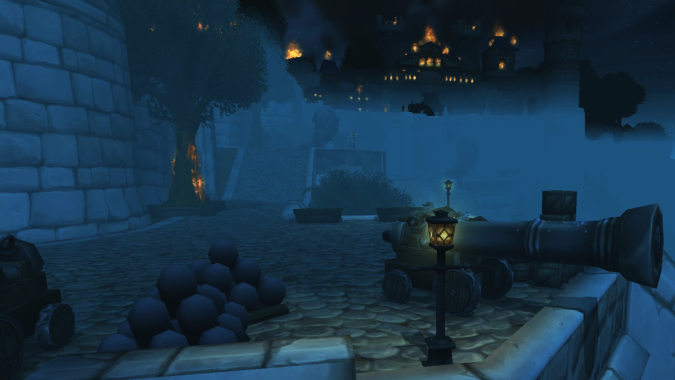 This is where the scenario kicks things up a notch and continues to do so until the very end. Your entire group is stealthed thanks to Rokhan, but that doesn’t mean it’s an easy escape. First, you have a near run-in with King Anduin, who personally protects his citizens atop horseback. Then, Greymane and his forces flank you after apparently being sold out. Then, Jaina shows up and is absolutely terrifying. Seriously, she has a real “Lich King in Halls of Reflection” vibe about her, and if you get too close to her, she kills you in what may be the game’s best, most confident kill ever.

But we’re still not done. The Prophet Zul, being all prophet-y, uses a torch he grabbed earlier for no apparent reason and blocks the path behind you with fire. All good, right? Nope! As you reunite with Nathanos, Jaina begins raining ice from the sky, basically acting as a one-woman barrage. And just when it seems like you’re home free, Jaina appears at the end of the docks. She is fully ready to fight — and probably kill all of you — when Zul points out the city is in flames, and it will burn to the ground if she doesn’t use her magic to quench the flames. She opts to save Stormwind, giving you the opportunity to escape. Back to Sylvanas as ordered? Nope — to Zandalar, because it’s Talanji’s boat and what she says goes.

Chronologically, the Alliance’s scenario takes place not long after the Horde’s, and it definitely feels a lot more lighthearted. In it, you’re tasked with accompanying Jaina as an emissary to gain the aid of Kul Tiras. After all, now that the Horde has the support of the Zandalari, the Alliance needs an ally with an equally impressive — perhaps even better — naval fleet. If you need proof of this, just take a look at the ship you and Jaina take there — good Yogg, that thing is intimidating.

Slightly concerning to both players and Anduin is the fact that Jaina is willing to do anything to beat the Horde. Time will tell where her story takes her, but of more immediate concern is the fact that you’re apparently taken prisoner upon arrival to Kul Tiras. This is supposed to be explained via cutscene, but this is alpha, so all we get right now is a loading screen between leaving Stormwind and waking up in Tol Dagor.

Tol Dagor, as it turns out, is a prison much in the same vein as Tol Barad. When you wake up, you’re in a cell with some dude named Flynn Fairwind — and according to him, it’s your lucky day, because you’re bustin’ out of this place. As people who just met often do, Flynn asks you to punch him, and you oblige. All according to plan! 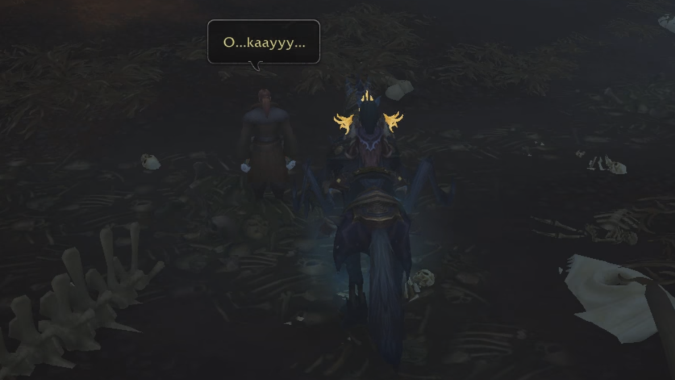 What follows is a fairly classic prison-escape sequence. The guard opens the cell because Flynn is “injured,” you and Flynn open all the cell doors to start a prison riot, and eventually you make your way past sewer vicejaws and onto a beach. A single guard blocks your escape to freedom, and you engage in an epic fight, barely escaping alive the prison guard gets eaten by a giant isopod that pops up out of the sand. With the way clear, you head to the end of the beach and meet up with Flynn’s friend, Taelia, who has a boat and your ticket outta this place.

This feels like the equivalent of the Horde’s scenario right before things kick into high gear — except they don’t, as far as we know. Just like the Horde’s, when you escape, you’re on your faction’s respective island but in a zone not yet available for play. As a result, you get ported out and whatever follows is a mystery. 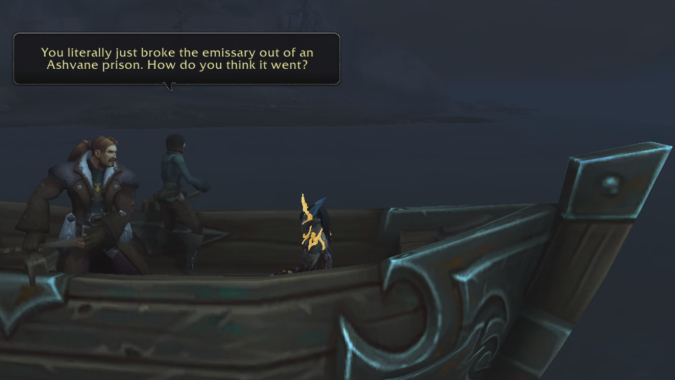 What to make of it all

I hope it goes without saying, but any reactions I may have are based off an unfinished, now-removed set of scenarios that may or may not change. Okay, glad to have that out of the way. Now, as for the scenarios themselves, they’re both very good looks at what takes each faction to its respective Battle for Azeroth locale. Moreover, they both strike very different tones and raise a few questions that remain to be answered.

Where things fall short, to me, is in the fact that both involve some sort of prison escape — and this makes them a little too easy to compare side-by-side. I don’t even mean in terms of how everything is presented; rather, the overall length of each and what story beats they both go through. I commented on this above, but the Alliance’s scenario feels like it ends right about the time the Horde’s really gets interesting.

I’m not saying the Alliance needs to have some sort of crazy escape like the Horde does — in fact, the isopod was actually a hilarious inversion of this setup that I don’t want to see go away — but I do think it could benefit from a third act. And again, maybe it has more once you arrive in Tiragarde Sound. But with what we’re given thus far, I’m hoping we get a little more once we escape the sewers with Flynn. After all, he’s a pretty funny character. I’m sure he wouldn’t complain about more time in the spotlight.

As for questions, I want to know if Saurfang is the one who betrays the Horde, or if that is really just a clever misdirect. I’m hoping for the latter, but Saurfang is a noble warrior and may very well disagree with Sylvanas’ approach to the Horde. Meanwhile, I’m very curious if the Halls of Reflection feel given to Jaina is intentional and, if so, what it means for her character. I think I speak for a lot of people when I say I don’t want to see Jaina get the “…and then she turned evil!” treatment, so I’m hoping this is another misdirect.

Still, I like what I see on both sides. The Alliance’s may seem a bit sillier, but I don’t think that’s a bad thing. It’s a breath of fresh air after the seriousness of Legion, and it provides yet another dichotomy between them and the Horde. I’m optimistic (if cautiously so) for what comes next, and I can’t wait to see the scenarios in their finished state!