Last week, we discussed the peculiar decisions that led the Void Elves straight into the arms of the Alliance. But the odd decisions aren’t left solely to one faction. And just as Lor’themar Theron allowed a contingent of elves to be barred from Silvermoon, Tyrande Whisperwind was doing the same with the long-lost kin of the kaldorei. The Nightborne called for and took the assistance of both Horde and Alliance when they needed help taking back Suramar. However, when it came time to choose an ally, they sided with the Horde.

Note I said clearer, not less confusing. Tyrande’s apparent snub of the Nightborne is outwardly just as baffling as Lor’themar’s expulsion of a piece of Silvermoon’s already tattered population. However, there are two sides to every story — and in Tyrande’s case, both sides of her decision are worth a look.

Let’s be clear right off the bat — Tyrande’s decision is perfectly justified. The Nightborne of Suramar are essentially the remnants of Highborne civilization. Not just remnants — perfectly preserved remnants. While the rest of the world was torn asunder, Suramar remained just as it had always been. And Suramar has personal significance to Tyrande. It was her home, as well as Malfurion and Illidan’s. Suramar was the location of the original Temple of Elune, where the high priestess resided.

This is the city where Broxigar was held captive — until he was freed by Malfurion. This is the city that was under the Legion’s watchful eye, and nearly the site of a second Burning Legion portal. Suramar was ground-zero, second only to Zin-Azshari as a hotbed of demonic activity during the War of the Ancients. To anyone else, it’s a fascinating historical site. To Tyrande and those that were there, it’s nothing but memories of days the kaldorei long to forget and of the war that literally tore the world asunder.

The Nightborne not only cloistered away in a part of the city, shielding it from harm — they essentially preserved and kept a piece of the Well of Eternity whole. And then they used a Titan artifact to change the Well, turning it into a source of sustenance. And for thousands of years they kept their society — Highborne society — alive. The place that Tyrande once called home bears no resemblance to it. The buildings might be the same, the streets may be familiar. But the citizens are as far removed from the kaldorei they once were as their attitudes are removed from those that originally fought the Highborne in that ancient war.

They did not turn away from arcane magic, they embraced it. So tightly, in fact, that it became essential to survival.

Although Suramar may have been Tyrande’s home — once upon a time — it certainly isn’t now. Both Tyrande and Malfurion were very clear about their feelings regarding the Well of Eternity and arcane magic. Illidan was locked away for 10,000 years because of his attempts to recreate the Well on Hyjal. The surviving High Elves were banished from Kalimdor because of their insistence on practicing arcane magic. Both instances should have carried death sentences by all rights, but Malfurion showed mercy in each case.

Tyrande, Malfurion, and Illidan all played integral parts in the War of the Ancients. They remember what originally caused that war: Queen Azshara making a deal with the Burning Legion. Her less-than-worthy subjects were slaughtered as a result of that deal. If the Highborne hadn’t been so reckless with their magics, perhaps the Burning Legion never would have discovered Azeroth. If Azshara hadn’t been so hungry for power, perhaps all those innocents never would have died. The choices the kaldorei made after the war were a direct response to what they observed during the War. They didn’t want the Burning Legion to come back, so they eliminated all probable causes that might warrant a return.

But what we see in Suramar is a civilization that continued to embrace everything the Highborne were known for. Societal structures and the practice of magic were perfectly preserved. Behind their bubble, the citizens of Suramar changed, evolving into masters of the arcane. By now, their arcane mastery far outstrips anything the Highborne accomplished back in the days of that ancient war. Did Tyrande help the Nightborne in their hour of need? Yes. Does she owe them anything further? No — and given what they’ve done with her former home, you can’t really blame her for her feelings on the subject.

Needs of the many

And yet…at the same time, these are her kin. Changed, yes — nearly altered beyond recognition. But the struggles of the Nightfallen should ring familiar to Tyrande Whisperwind. They are in much the same position she and the rest of the kaldorei were during the War of the Ancients. A tyrannical leader has made a deal with the Burning Legion, and the lives and freedom of the shal’dorei are at stake. The Nightfallen faces of the rebellion may be strange, but their goals are the same — to free the city and end the Legion onslaught. To bring down the leader that would sacrifice her own people in the name of an alliance.

Yes, the kaldorei have traditionally frowned on the use of arcane magic. But they have shown some leniency in recent years. The Shen’dralar were not only allowed to return to kaldorei society, they were allowed to begin teaching the arcane arts to Night Elves that wished to learn. The Nightborne arguably have much more skill with the arcane than the Shen’dralar. Surely you’d think the Night Elves would want to utilize that knowledge, rather than turn it away, wouldn’t they?

Yes, the Nightborne essentially preserved the Well of Eternity. They warped it into something other, and they used its energy as nutrients to survive. But when all is said and done, and the dust from the rebellion has settled, First Arcanist Thalyssra chooses not to stabilize the Nightwell. She believes it best that the Nightborne leave it behind them — and let it die. In time, the Nightwell will burn out entirely — and Thalyssra has no intention of preventing that. 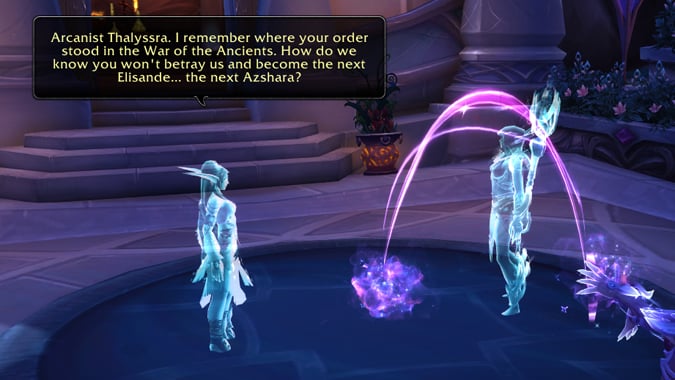 In the end, we really don’t get the full story here. We see Thalyssra and Tyrande’s initial conversation during the Suramar campaign. Tyrande very clearly expresses her concerns surrounding the Nightborne. The Highborne once allied with the Burning Legion, bringing about the War of the Ancients. The Nightborne allied with the Burning Legion, and brought Suramar to its knees. What proof did Tyrande have that this situation wouldn’t happen a third time? All she had were Thalyssra’s reassurances — the reassurances of a stranger that might well have said anything to obtain the help she needed.

And Tyrande’s answer was gracious enough, in hindsight. She offered the help of the kaldorei to defeat the Legion and see the Nightwell destroyed. Beyond that, it was up to Elune to guide the kaldorei. That’s all we witnessed — we didn’t see any further conversations between Thalyssra and Tyrande. All we have is Thalyssra’s bitter statement that “Elune’s wisdom” guided Tyrande away from the Nightborne entirely. Was it because Tyrande didn’t immediately reach out after the battle was won? Was it because Tyrande somehow insulted Thalyssra and her kin? Or was it just stubborn impatience on Thalyssra’s part? We have no proof for any of these scenarios.

What the shal’dorei did have were the immediate reassurances and continued support of Lady Liadrin and the sin’dorei. Next week, we’ll take a look at Thalyssra’s dealings with the Horde — and a kinship that may shape the future of the Nightborne.

Blizzard Watch is made possible by people like you.
Please consider supporting our Patreon!
Filed Under: Allied Races, Blood Elves, Night Elves, Nightborne, Nightwell, Suramar, War Of The Ancients, Well Of Eternity
Advertisement