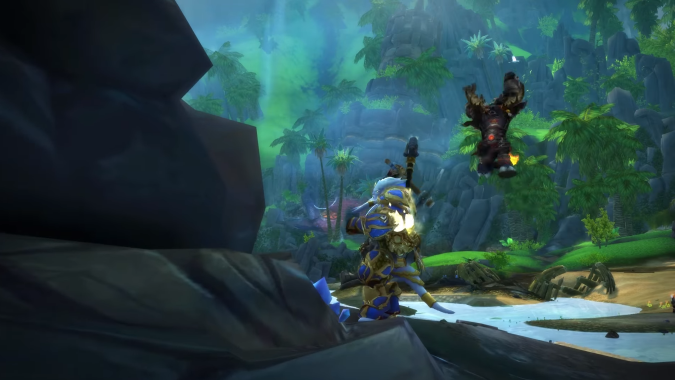 Yesterday, World of Warcraft players were treated to a bit of a surprise when Blizzard dropped the new Seething Shore battleground on us without much prior fanfare. Of course, they didn’t technically drop the battleground on us yet — this week, Seething Shore is classified as a PVP Brawl, allowing players to preview it before its official debut next week. I don’t know if it was their intent, but I’m using the preview as an excuse for some constructive criticism in case they feel like changing anything between now and March 6.

The good news is, there’s really not a whole lot that I’d like to see changed. To be honest, I’ve fast fallen in love with this battleground, so my complaints are pretty minor. But hey, if you’re not usually into PVP, maybe I can convince you to change that for this battleground! And if you are into PVP, I’d love to see if you agree with what I’m about to say.

So, without further ado, let’s take an airship skydive right into things! 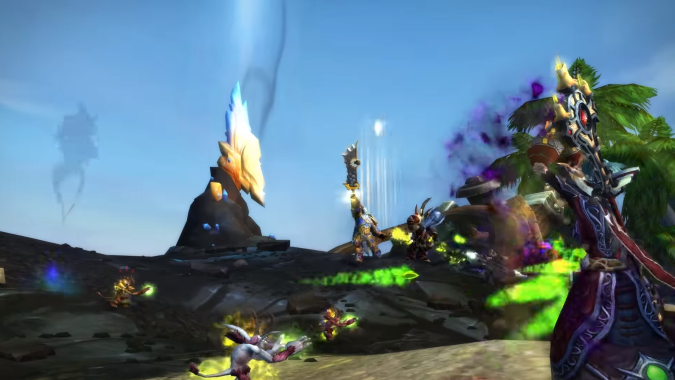 A quick rundown of the basics

Before we hop into the goods and not-so-goods, it’s probably useful to tell you what this whole thing is about, huh?

Seething Shore is a 10-versus-10 battleground wherein players fight over capture points, similar to the capture points in Arathi Basin and Battle for Gilneas. Unlike those two, however, the capture points (Azerite Geysers) are constantly changing locations, moving among 12 possible locations. There are roughly three up at one time, and as soon as one team captures a point, it disappears and a new one replaces it elsewhere. The first team to capture 15 Azerite Geysers wins.

In addition to the general capture-point nature of the battleground, another unique aspect of the Seething Shore is that players start on an airship that flies in a circle above the action (they are essentially the gunships in Isle of Conquest). When you jump off, you’re temporarily able to propel yourself forward in whichever direction you’re facing. If you cast quickly enough, you can do this three times before getting low enough that your parachute deploys. There are no graveyards, either — you respawn on the airship after each death. Oh, and speaking of dying, you have a 15-second resurrection timer no matter when you die. Gone are the days of a 30-second, group-wide resurrection rotation.

Are we all clear on the details? Jump off a ship, capture a point, move to the next point, disrupt the other team, repeat. Sure, it sounds straightforward, but the battleground itself is pretty chaotic… and that’s what makes it so great. 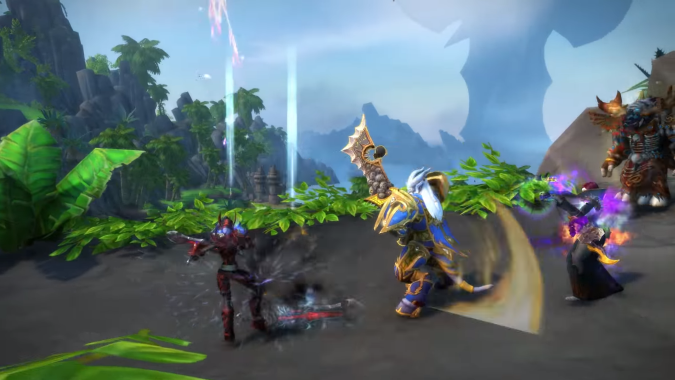 There’s a heck of a lot to love

One of my favorite aspects of Seething Shore is how fast-paced it is. Because the Azerite Geysers are constantly switching locations, you’re constantly on the move. It may be a capture-point battleground, but it feels nothing like Arathi Basin or Battle for Gilneas. Either you’re fighting desperately over a point, or you’re on the move to the next one. There’s no downtime, and it feels wonderful.

Similarly, because each point grants you 100 of a necessary 1,500 closer to winning, the impact of keeping a channel from finishing feels that much bigger. Sure, there’s plenty of back and forth in Arathi Basin. But even if the enemy team captures a point, you can still wipe them two seconds later, back-cap, and more or less keep them from having made any progress. Not so much here — one person with the right combination of defensives, tactical maneuvering, and proper ability usage can hold off an entire enemy group long enough for reinforcements to arrive. The end result is that if you play your cards right, you can feel like a one-person army.

Oh, and have I mentioned the place is looks gorgeous? It reminds me of Pandaria’s Isle of Giants and the Goblins’ Lost Isles, both zones with lush and vibrant scenery. It’s one of the few battlegrounds I actually really lament not being able to visit out in the “real” Kalimdor, purely because of how nice it looks.

Lastly — and this may change, since it’s classified as a Brawl this week — the place is a great way to farm Honor. After playing five or six games (and winning only two of those), I’ve gained somewhere in the neighborhood of three Honor ranks already. If you’re after those PVP Artifact appearances, there’s no better time to farm ’em. So with all there is to enjoy, what brings the battleground down? Not much, to be honest! 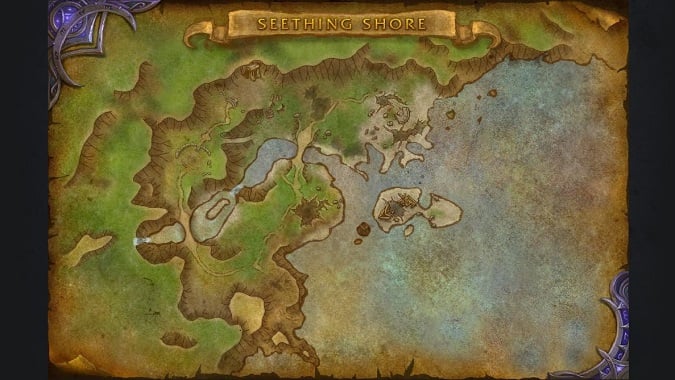 The UI elements leave something to be desired

One of the first things I noticed when running this with a group over voice chat was that none of us actually knew how to call where we were headed. Likely, will lessen over time as we get used to the battleground. For now, however, it feels weird opening the map and not being able to mouse over any point on the map to see its name. This is only exacerbated by the fact that there are 12 spawn points in the relatively small battleground space.

It can be especially frustrating when Azerite is about to spawn and you can’t call out drop points. The only time you see the names is after Azerite has spawned on a given spot — emphasis on “after.” Despite Azerite nodes being visible on the map before they can be captured, they’re simply listed as “Azerite Geyser.”. It’s only once they spawn in that you can mouse over their icon to see the name (e.g., “Tower Azerite,” “Tide Pool Azerite,” and so forth).

On top of all of the above, anyone who’s used to using Shift + M to bring up a small version of the battleground map for quick reference will be disappointed here. Unlike other PVP battlegrounds with map objectives, the objectives don’t appear, effectively making the mini-zone map useless. As a result, you’ll have to open your map any time you want to see a new Geyser’s spawn point. With how quickly the battleground moves, that’s a lot of map opening.

Similarly, it would be nice if the map showed the locations of the gunships. Quickly being able to see where they are would make planning a jump slightly easier. Since the ships circle above, it’s nice knowing if you’re about to propel yourself underneath the enemy’s closest Azerite Geyser. Granted, this could very well be intentional! But it feels convoluted to look at the enemy ship, open your map to get an approximation of where it is, and then plan a jump accordingly. The end result is the same as seeing an icon on the map, just more time consuming. 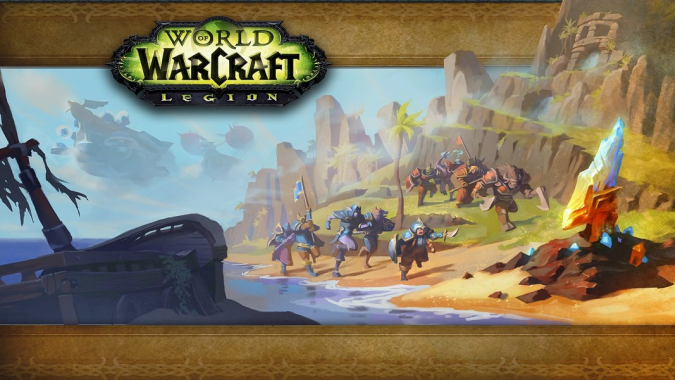 Overall, I can’t get enough of the new battleground. The fast-paced nature makes matches go by quickly. This is true even if the actual amount of time passed is comparable to other battlegrounds. Similarly, I’ve ended up having a lot of matches with final scores only a few points behind. Even if being behind three-to-five captures is realistically a lot, it still always feels close. At least, it does to me.

The parachute mechanics still throw me off a bit, but only slightly. Since they don’t maintain momentum the way Levitate or Slow Fall do, it’s harder to plan my fall. Maybe that’s more noticeable to me since I play a Priest, but I feel like there’s room to improve. The transition from jet propulsion to parachuting should feel less like hitting a brick wall and more like diving in.

Oh, and as far as NPCs go, I hope you like Nathanos Blightcaller and Mathias Shaw. They do… a lot of talking here. Personally, I find Nathanos entertaining, since we rarely see him this animated. But I could see how it would get annoying. Oh, and we absolutely, without any doubt whatsoever, need Zappy Boi back on the loading screen. Blizzard, what were you thinking when you removed him? Seriously.