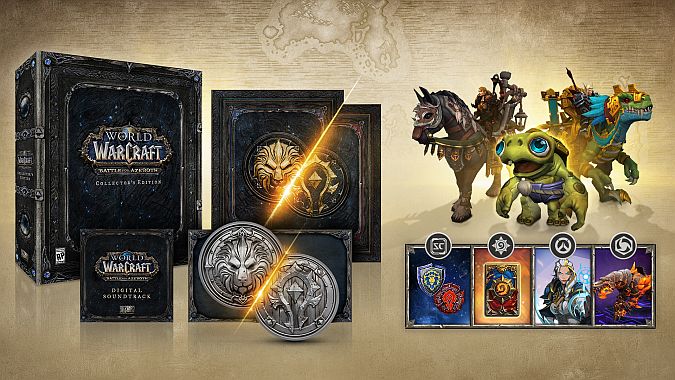 World of Warcraft’s upcoming expansion, Battle for Azeroth, has been available for digital pre-order for some time now. And while that route to pre-ordering includes both digital and Digital Deluxe versions, we didn’t know what would be included in the physical Collector’s Edition. Today, that changes.

In addition to all the Digital Deluxe goods, the physical Collector’s Edition will include a hardcover-bound novella that is technically two novellas in one. What do I mean by that? I mean it tells the stories of what happens after the events of the Before the Storm novel — one from the Alliance’s perspective, and the other from the Horde’s.

Oh, and don’t worry if you want the story without the price tag, either. Both novellas will be available digitally as well — you’re just missing out on the fancy hardcover nature if you read them that way.


Also included in the physical Collector’s Edition is a “Mark of Allegiance” — essentially, a very large emblem where you can display which faction you fight for. One side of the Mark features the Alliance’s emblem, the other side the Horde’s. If you couldn’t tell, Blizzard is very much pushing the faction pride this time around.

And finally, the official Battle for Azeroth soundtrack CD will come with the physical Collector’s Edition as well. Unfortunately, it appears the art book that usually comes with physical Collector’s Editions is not present this time around. Given the quality of the novella, it’s not altogether too surprising that it replaced the art book, but it is still disappointing it couldn’t have existed alongside it.

Something new this time around is the fact that anyone who’s already purchased the expansion by the time the physical Collector’s Edition is out will receive a refund in the form of a Blizzard Balance. Full details can be found below, but please note that you must enter the Collector’s Edition key before the end of 2018 to receive the refund.

Upgrading from Standard or Digital Deluxe to Collector’s Edition

Please note, if you bought a standard edition then upgraded to a digital deluxe, you will be credited for the original copy only.

If you bought the Standard OR Digital Deluxe copy of Battle for Azeroth and pre-ordered the Collector’s Edition, your Blizzard Balance credit will be the price you paid for the original copy.

If you bought the Standard digital copy, upgraded to Digital Deluxe at a later date, then pre-ordered the Collector’s Edition of Battle for Azeroth, your Blizzard Balance credit will be the price you paid for the original Standard Edition.

Battle for Azeroth releases on August 14, 2018 and will come with a host of changes and new features. For more on everything we’ve learned, be sure to check out our full coverage of the WoW Media Day.