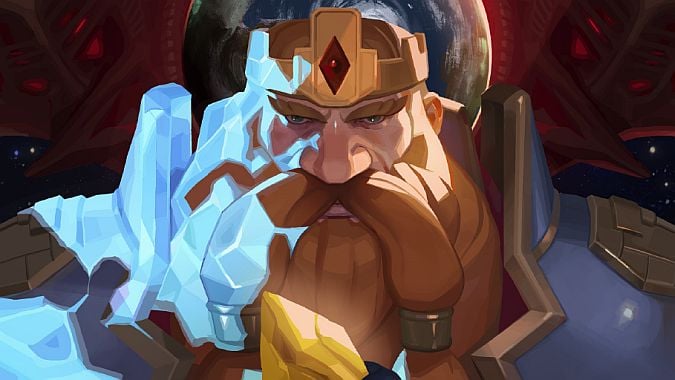 Coming a week after the first Battle for Azeroth tie-in comic — which starred Jaina and explained what she’s been doing during Legion — we now have our second tie-in comic. This one is called The Speaker and focuses on everyone’s favorite talking crystal, Magni. I have to say, though, I wasn’t ready to have such a strong emotional response to this one after last week’s Kul Tiran diversion.

The Speaker follows Magni as he tries to re-communicate with Azeroth in the wake of Sargeras (A.K.A. “One Stabby Boi”) and his final, deadly attack on the planet. Not too surprisingly, a mortal wound has taken its toll on the planet, and Magni can hear nothing but her screams.

However, The Speaker is about so much more than watching Magni try to understand what Azeroth wants from him. I don’t want to give away too much, but there’s a moment in the comic when everything clicked for me and it’s just brilliant. In other words, go read the comic if you haven’t already so I can discuss spoilers in the next paragraph.

Did you finish reading? Good. Because I really want to talk about that turning point.

The point I’m referring to is when the flashes between Silithus and Dun Morogh are clearly defined as parallel journeys taking place at different points in time. Maybe I’m just bad at reading comics, but I was trying to figure out why Magni was walking from Dun Morogh to Silithus and how it all fit together. And then it happened.

“It used to be… I could talk to her. I could understand what she was feelin’. But after it happened… Everythin’ changed.”

Those words… repeated at the grave of Magni’s wife, Eimear, exactly as they were at the beginning of the comic as Magni looked upon the wound in the world. That’s when it all clicked for me. From that point onward, every single panel had more meaning, and it all led to a fantastic, tear-inducing ending with so much weight behind so few words.

Magni, for everything he’s done to help Azeroth, still couldn’t save those closest to him in his past life. For him, saving Azeroth isn’t just about saving the planet. No, it’s much more personal than that. He has a chance to help her, a chance to save her before he loses her all over again.

And he ain’t gonna leave her.

Blizzard Watch is made possible by people like you.
Please consider supporting our Patreon!
Filed Under: Battle For Azeroth, BFA Comics, Comics, Magni, The Speaker, Wow Comics
Advertisement