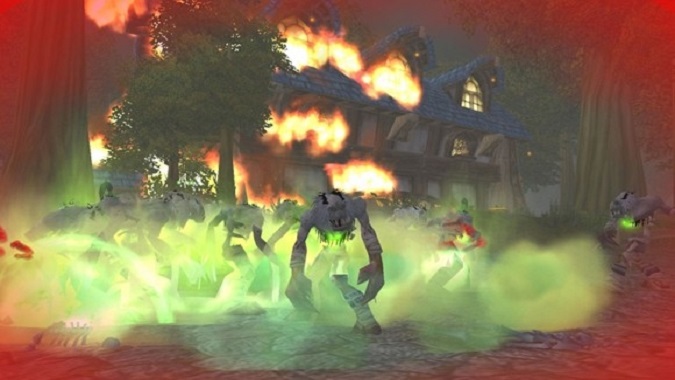 Battle for Azeroth launches in less than a month, and the pre-patch event has officially begun! These preview events have always been part of WoW, starting with the very first expansion, to help transition us from one era of the game’s story to another.

Battle is WoW’s seventh expansion, so we’ve had seven pre-expansion events. Some have been absolutely incredible experiences. Others have disappointed. It’s too early to say how the current event will be perceived. WoW’s first two pre-expansion events had some highlights, as well as some controversies. Let’s look back at Burning Crusade‘s Dark Portal event and Wrath of the Lich King‘s zombie plague. 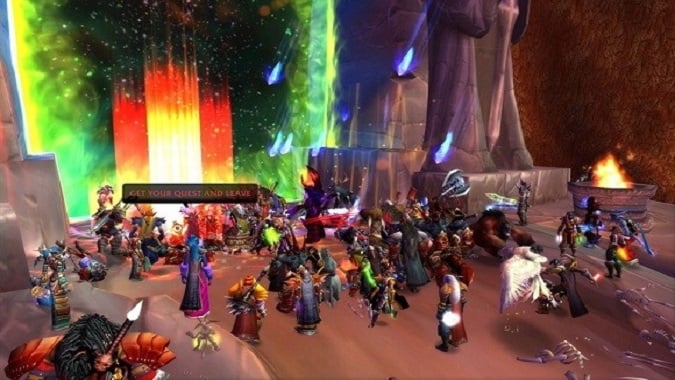 The Dark Portal is zerg-AOEed

Released on Jan. 7, 2007, patch 2.0.3 set the stage for WoW’s very first expansion. Blizzard unveiled the game’s first pre-expansion event, known as The Dark Portal Opens (or Highlord Kruul Unleashed in Europe). Many of the game’s early events, like the one-day, miss-it-or-it’s-gone-forever Opening of the Gates, this event lasted a very short time. We had just one week to experience it before Burning Crusade officially went live.

While perhaps not as ambitious as later in-game events, the Dark Portal offered some memorable moments — and some valuable lessons for the game’s developers. During this event, Burning Legion demons rushed out of the portal in the Blasted Lands and clashed with Argent Dawn warriors. The event featured a single quest called Into the Breach (not to be confused with the later quest of the same name in Grizzly Hills). The objective was to kill six of the invading demons. Sounds easy, right?

But like most quests in early WoW, it was easier said than done… Everyone on your realm wanted to get this quest done, and the Portal was the only place to do it. During the event, dozens — sometimes hundreds — of players camped out by the portal hoping for their chance to complete the quest. Demons spawned from the portal in small, concentrated groups. The first person or party to tag each demon would get credit.

So, as you can imagine, it was an AOE spamfest.

Those poor demons were shredded to pieces the second they spawned. Fire and ice rained from the sky. Steel blades hit them from every direction. Arcane explosions thundered all around. Even the very ground they walked on burned with holy fire. It wasn’t an invasion. It was a meat grinder. Some players figured out that by continuously AoEing the portal, they could grief everyone else who was trying to complete the quest. Angry /yells begged for sanity to prevail. Blizzard’s forums were flooded with complaints.

The reward from the quest was a special tabard with an on-use ability called Tabard of the Protector. Using it created a sparkly display to show off your demon-tagging prowess. It was a nifty reward for its time and now is perhaps even more so, given how rare these tabards must be today. 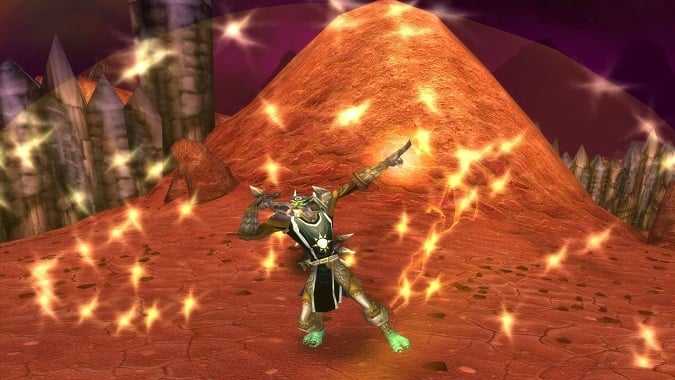 The event also featured a world boss named Highlord Kruul. Kruul replaced the classic world boss Lord Kazzak and shared the same loot table, but he was only available during this event. The big difference between Kazzak and Kruul was that Kruul enraged after one minute rather than three, making him much more difficult.

Kruul, like Kazzak, would heal for a large amount whenever he killed a player. Realizing this, players kited him to populous cities where he would be virtually unstoppable from all the healing he received. Chaos inevitably ensued.

If you managed to complete any of tanking Mage Tower quests during Legion, you ran into Kruul again. 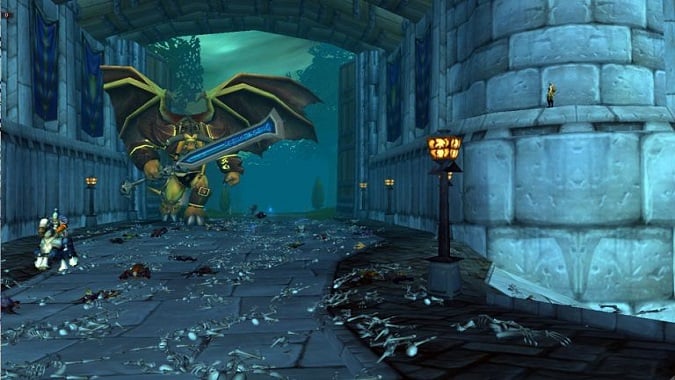 In the fall of 2008, anticipation for Wrath of the Lich King was feverish. Although players knew some kind of Scourge-based event awaited us, no one knew the details or the scope. At midnight on October 22, it began. Argent Dawn members appeared in capital cities to warn us. “The Lich King is attempting to make his presence known,” they said. “We must not let this occur.”

It began so innocently: a pile of Conspicuous Crates appeared in just one town, Booty Bay. Players who inspected them became infected. The disease had a 10-minute countdown. If the timer ran out or you died with the infection, you were transformed into a zombie. Even then, hope was not entirely lost. Diseased players could be cured with a Cleanse spell or by handy Argent Healer NPCs. 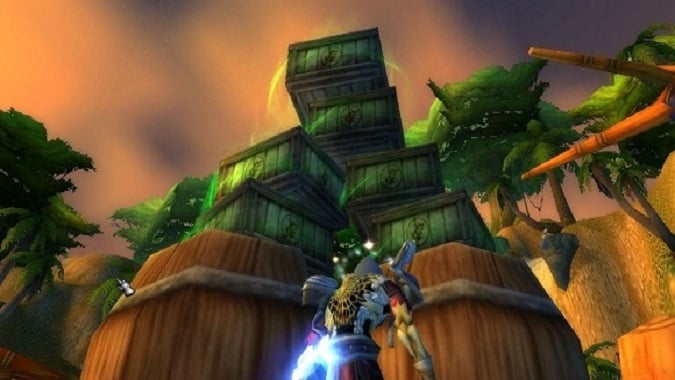 Many of the aspects of the original Scourge Invasion event from patch 1.11 eventually reappeared, including its quests, NPCs, (updated) rewards, and bonus bosses in dungeons. A new bonus boss called Prince Tenris Mirkblood appeared in Karazhan. He dropped the Vampiric Batling pet and the amazing Arcanite Ripper. Like the original event, flying necropolises peppered the continents with legions of undead. Players could check their world map to see which areas were currently under assault — an early precursor to the invasions from Legion.

Day 3 was the tipping point. Previously, the plague had been a novelty, something to play around with. As a zombie you could infect someone here and there, but usually they were able to get rid of the disease before transforming, if they wanted to. At this point the plague fully took over, disrupting cities whether players were purposely driving the infection or not.

But of course, players were driving it. 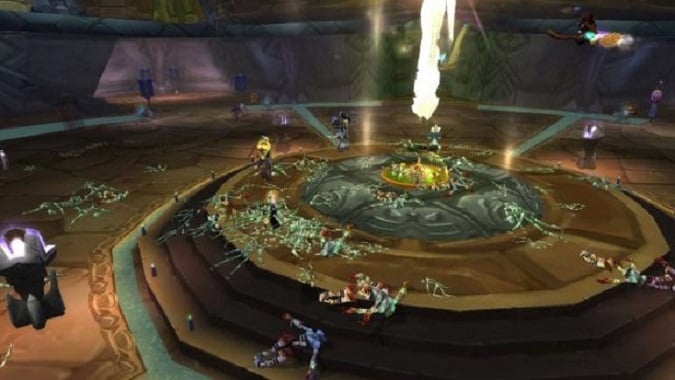 People organized zombie raids on different cities with the intent to cause maximum devastation. The game gave them the tools and they took full advantage.

As a zombie, you had access to new abilities, but you also had some severe limitations. You moved at 50% normal speed and your health was constantly draining. However, you had abilities to heal yourself and others around you, to gain a short burst of speed and snare your target, and to accelerate your target’s disease countdown. You could also explode when you were close to death. All this meant that a horde of zombies was much, much scarier than one or two by themselves.

Organized packs could take over capital cities. When you became a zombie, you could also use Shattrath’s portals to port to any city, even those of your enemies. And so we did, in droves. Fighting against the undead masses was fun too, if you had enough healthy players at your side to put up a resistance. With so much stacked against you, however, players and NPCs couldn’t stem the tide. Cities fell one by one.

Lone survivors looked out from their hiding spots in dark alleys and doorways and saw nothing but deserted streets, the bones of the dead, and roving packs of the reanimated. The economy ground to a standstill as auction houses became charnel houses. Players fled to the countryside to survive.

What was so amazing about this event is that it felt so authentic. It felt the way you always imagined a zombie outbreak would feel. Minor incidents led to escalation and then to absolute world-ending mayhem. The best ways to survive it were the ways you’d expect: staying in large groups, remaining armed and ready at all times, and avoiding population centers. This was The Walking Dead in WoW.

On Day 4, realms spiraled into madness. Some players, unfortunately, found all of this no fun at all. 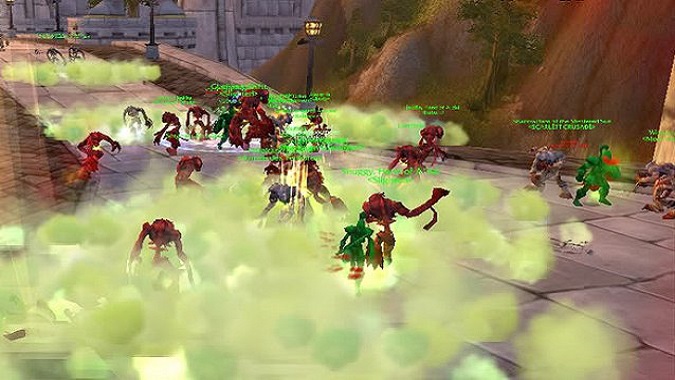 Despite how amazing this event was in hindsight, for those who lived through it, it was a massive disruption to the game. Naturally, there was a lot of complaining.

Part of the reason the event garnered so much outrage from the community was how dependent we were on NPCs for everything back then. If you ran out of reagents — for example, to create a mage portal to escape the zombies — and the reagent vendor was dead, you weren’t porting anywhere. You weren’t able to Reincarnate yourself as a Shaman. And you could forget about a combat rez.

Each city had just one auction house back then. Those NPCs made for popular targets, so you could forget about buying or selling anything that week. If you wanted to queue for a battleground, you needed to talk to the Battlemaster NPCs. No NPCs, no BG access whatsoever.

In fact, if the Battlemasters transformed during your contest, they would infect you while you watched the loading screen — because the game always brought you back to them after a match. Players also made clever use of arrival points such as Stormwind’s Mage Tower. You could be transformed before your screen even showed that you were in danger.

Such an event today would be far less disruptive both due to flying and to our general self-sufficiency compared to 2008. Modern players often scoff at people who took to the forums to complain about this event, but you have to put it in the perspective of its era. You couldn’t just mount up and zip away from the plague. It was all around you. You were trapped.

And that was kind of the whole point, to give you a darn good reason to want the Lich King dead. I would say it worked as intended.

On Day 5 of the event, new quests became active. The Horde sought a cure for the plague, while the Alliance looked for a weapon to bring down the Scourge necropolises. On Day 6, our efforts succeeded. The Argent Dawn discovered a cure and stopped the invasion. The event came to an end. Like the Dark Portal event from Burning Crusade, the plague only lasted about one week. One gloriously insane week.

The zombie plague event garnered huge press for Blizzard, including mainstream news media. All this excitement most certainly helped fuel WoW’s climb to its peak subscription numbers during Wrath.

Blizzard Watch is made possible by people like you.
Please consider supporting our Patreon!
Filed Under: Burning Crusade, Pre-Expansion Event, The Dark Portal Opens, Wrath Of The Lich King, Zombie Plague
Advertisement