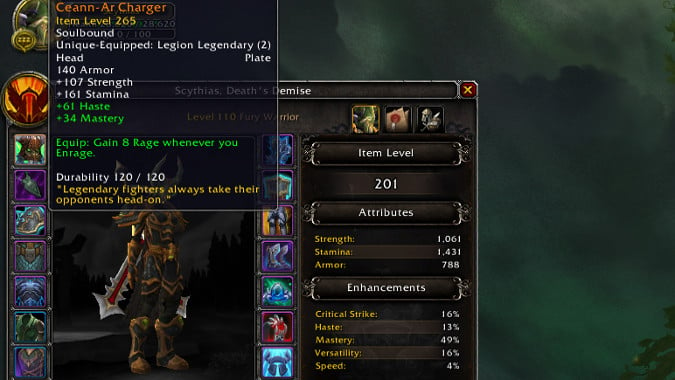 As part of the 8.0 patch, some of the powers of the various legendary items we’ve been collecting all expansion have been added as talents and abilities to the various classes and specs that have been making use of them. It’s a good way to preserve those best-in-slot legendary effects that really changed the way we played those classes. But for right now, we still have those legendaries, and as the folks at Wowhead pointed out, this means certain talents and abilities are stacking with those legendaries.

As we move into Battle for Azeroth — it’s coming out in 14 days from this writing — those legendaries will stop working around level 116 or so. But until then, a legendary item that stacks with a talent will be a very tempting item to keep and use, just for that stacking bonus.

Some of these are incredibly powerful, while others are just nice utility buffs. For example, the combination of the Ceann-Ar Charger and Endless Rage means that a character using both will gain 14 rage every time they Enrage. That’s certainly very nice but it’s not quite as fun as the Hood of Eternal Disdain stacking with Creeping Death, which will allow your Agony to deal its full damage 22% faster.

And then there’s The Dreadlord’s Deceit and Hidden Blades. Even after hotfixing them to be additive, stacking them buffs the damage on Fan of Knives by 1450%. Before the hotfix, this combination buffed Fan of Knives in a multiplicative fashion, literally by 57 times its normal damage.

Each class has at least one legendary/talent combination that you’ll be able to play with up until level 116. So if you happen to have a legendary you really like, you should be able to use it in conjunction with those talents to make the first half of leveling (110 to 115) easier. For the complete list, head on over to Wowhead and take a look.

Blizzard Watch is made possible by people like you.
Please consider supporting our Patreon!
Filed Under: Battle For Azeroth, Legendaries, Stacking, Talents
Advertisement