Train BFA cooking to 110 without ever leaving your starting zone 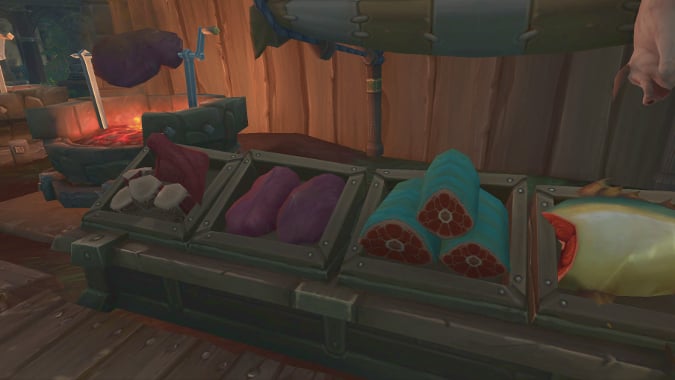 Update: Sorry, everyone, but it seems like Blizzard has removed the Fish Oil from the vendor. You’ll need to grab your fishing pole or go hunting to get leveling now.

There are a lot of small tricks and tips we’re discovering as Battle for Azeroth launches. We touched on a couple briefly in this Breakfast Topic. We figured we’d give you some more detailed instructions on a few of these handy tips, just to make your Battle for Azeroth experience a little easier.

When you reach your capital city, after taking in the sights, make your way over to the profession training area. You’ll be directed to go in the immediate area around there in the course of your initial exploration quest. After learning cooking from your profession trainer, look around for a trade vendor — they should be close by. On Alliance you’re looking for Henrick Wyther, and if you’re Horde Koatini is the person you’re after.

Before you start, I’d highly recommend you clear your bags. It’s not going to be pretty.

The first thing you can craft is Mon’Dazi, which remind me quite a bit of beignets. These require Foosaka to make, which Critical Role fans may recognize as a reference from the middle of their first campaign. Mon’Dazi stays orange until 35 cooking skill. You can learn a few more dessert recipes before this point, like Ravenberry Tarts, which give additional haste. At this point everything in your cookbook will turn yellow, but you can learn the second rank of lots of things, including Mon’Dazi. It might be a better idea to pick a different dessert, though — I chose Kul Tiramisu, because it grants crit.

At 50 points of skill, the recipes turn yellow, then green at around 80. This isn’t a huge deal at first, but around 95 skill, even though technically the recipes are still green it takes more than five combines to level up. At this point I swapped to Seasoned Loins or Honey-Glazed Haunches, which were still orange to skill up on. True to form, the desserts stayed green until level 110.

At 110, you can learn the Bountiful Captain’s Feast and other than a single drop recipe that’s the last recipe you need to learn in Battle for Azeroth so far. Neat!

Overall, this took me roughly a thousand gold and 20 minutes to do. I kept half-pausing to write this column though, so if you’re focused you can probably do it even faster. Now I have so much tiramisu in my bags I feel a little queasy even thinking about it.

Don’t forget to pull out your Pierre or another cooking fire. Basic Campfires work just fine, but you probably shouldn’t flaunt such an excellent candidate for Warchief where Sylvanas can see it.