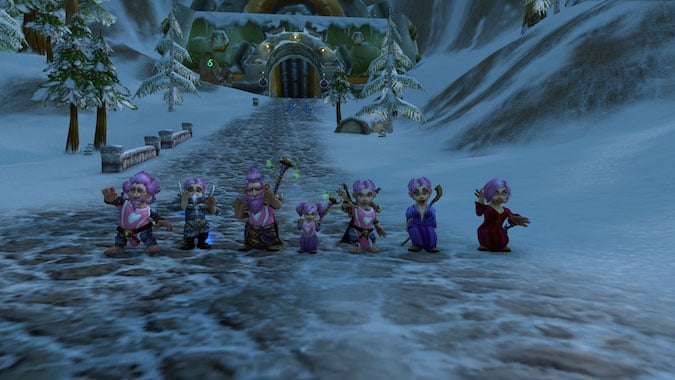 It can be hard to organize a 20-player raid, much less a charity event attracting thousands. And yet that’s exactly what Dravvie has been doing for nearly a decade in World of Warcraft. Earlier this month, pink-haired Gnomes — over 6,000 of them — ran from Gnomeregan to Booty Bay in the name of raising money for breast cancer research. It was the 9th annual Running of the Gnomes, which raises money for research on the Touhy Vaccine.

The year’s race surpassed its $8,000 goal, raising $9,380 in donations and another $1,366 from sales of Noxychu-designed shirts. If you still want to help, you may continue to donate to the Cleveland Clinic and their vaccine trials here, and you can still buy shirts (in pink or purple) or stickers.

How do you get 6,000 people running in the same direction?

Managing this many people has a lot of challenges, starting with how to get people into groups so you can communicate. Raid groups won’t hold that many players, and even if they could, players below level 10 can’t join them. To keep people organized (and get a head count), the run had 11 guilds for participants to join, plus an addon that automatically invited players whispering “INVITE” to guild leaders.

Sharding issues are also a problem with that many people in one place, leaving you either in the middle of the group and lagging or running by yourself and wondering where everyone went. If you were trying to stick with a group of friends, you had to hope the shard gods allow you to see people. (One year, it would be lovely to be able to join up with my guildmates to help organizers get a better head count. Plus, I’d love to see everyone who came out even if I lagged horribly.) The lag this year was not bad at all, except for getting into Stormwind from the tram. It felt like we were let into the city one at a time because I didn’t see very many Gnomes until I got to the front gate heading into Elwynn Forest. Then, suddenly, there were dozens of them!

Next up for Dravvie and company is the Running of the Trolls, which takes place during National Pride Month in June and benefits The Trevor Project. This organization provides crisis intervention and suicide prevention services to the LGBTQA+ community specifically targeting young people from ages 13-24. This will only be the third Troll run, but it’s shaping up to be an annual event. 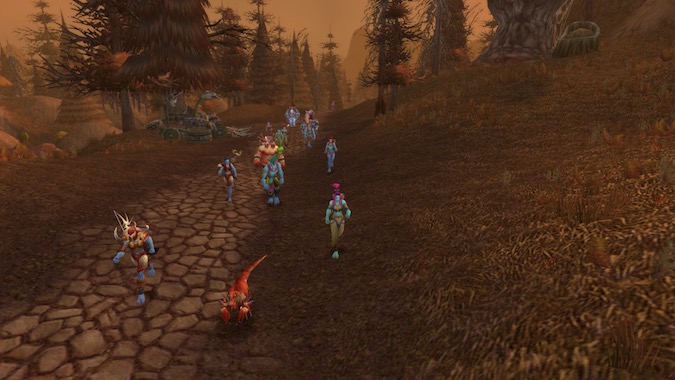 Dravvie begins to organize for each run about two months in advance. People helping with organization details have been doing this since the inception of each run, so the organizers know what they’re doing.

But anyone who’s interested can help out by talking up the runs, bringing friends, being mob bouncers (to keep low levels from being killed), and just being helpful to your fellow Gnomes and Trolls, who are sure to have questions when they log on. Anything you can do to help frees up those doing organization to get people going in the right direction.

The route has to be carefully in advance, too. While it’s easy enough to follow the roads from point A to point B, with the changes to the land around Undercity and Brill, Dravvie thinks the route for the Troll run may have to be altered.

These aren’t the community’s only charitable contributions

The Warcraft community participates joyfully in charity events, from Blizzard’s own charity auctions (this year’s starts on Thursday, and anyone can bid via eBay) and Make-A-Wish pet sales — and this year Overwatch players got involved as well, raising $10 million for breast cancer research. People like Dravvie, coming from the heart of the community, ensure great causes are well represented.

Your contributions may not seem like much, but as a community we can make a difference. Doing a fun run — with Trolls in June or Gnomes in October — or participating in Blizzard’s charity events allow you can donate to worthy causes and get something exciting in return.

Blizzard Watch is made possible by people like you.
Please consider supporting our Patreon!
Filed Under: BlizzCon 2018, Charity, Charity Auction, Dravvie, Running Of The Gnomes, Running Of The Trolls
Advertisement