Encounters in the Uldir raid have mechanics which are more punishing to melee players than ranged. This becomes more pronounced the further you get into the raid. New mechanics added as you move up the difficulty curve from Normal to Heroic to Mythic exacerbate the issue.  Combined with the implementation of mandatory raid buffs, it creates a perfect storm where ranged DPS are vastly preferred to melee. This leads to a subtle — or in some cases, not so subtle — pressure on melee players to either play their ranged offspecs (if they have one) or reroll to a ranged DPS class. 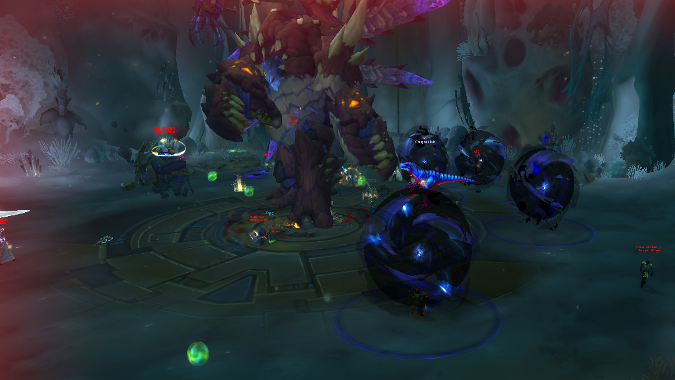 This is a not a new problem in raid design. Even with the relatively simple “don’t stand in fire” mechanics in early raiding, it was easier to deal with when you had a bunch of ranged players to spread across a room than if you were a melee-heavy raid forced to stand in one small spot behind the boss.

On a fundamental level, a ranged player has the option to come into melee for mechanics like Surging Darkness on Zek’Voz. Melee players don’t have the ability to go ranged (except for Survival Hunters for 15 seconds every 90 seconds – or about 3 times in a five minute fight).

One of the biggest offenders in Uldir is the Mythrax the Unraveler fight. Players periodically get put into five yard radius void zone called Oblivion Sphere. You are stunned until someone pushes you out by damaging you. The zones stay throughout the phase and if any player touches the zone, they too are stunned and have to be pushed out. Ranged DPS have an easier time reaching their teammates with damaging abilities while avoiding the zone itself. Even with ranged DPS handling that job, if you have a melee heavy raid the safe areas around the boss will drop quickly. More and more people get hit with a single cast of Oblivion Sphere, and there will be be almost no where to move from the other mechanics like running out Imminent Ruin or dodging an Obliteration Blast.

The other bosses have their own issues. For Taloc, Plasma Discharge requires melee to run out of range. During the transition phase, ranged can start DPS on the Volatile Droplet sooner. Coalesced Blood drop Blood Storm every few seconds and the radius is greater than melee range. Zek’Voz’s Eye Beam requires spreading. You can have a quick twitch player get out on Normal or Heroic, but on Mythic, you only have about a second to react. The boss’s hit box is a good size, but you can still have Eye Beam active during Surging Darkness. 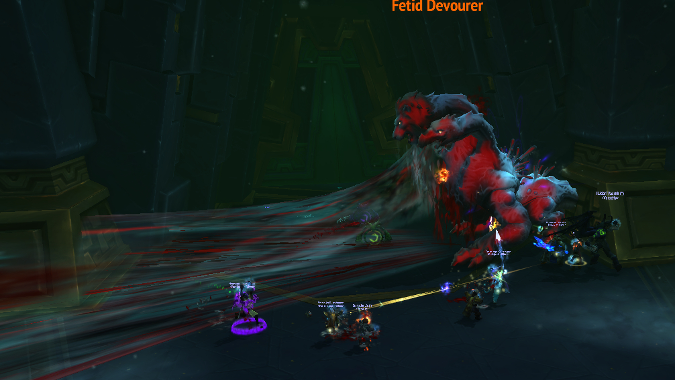 In addition to sometimes knocking players back, and needing to move to various spots to take down adds, Fetid Devourer has Malodorous Miasma. This five yard circle infests other players if they touch the circle. The damage stacks and each time someone touches circle it refreshes the duration of the debuff. When Malodorous Miasma converts into Putrid Paroxysm, the range of circle increases to ten yards. With G’huun, the name of the game is spread out, and then spread out some more. The more melee you have, the harder it is to keep spread for all the various Wave of Corruption, Blighted Ground, and Explosive Corruption. The usefulness of ranged utility, like Warlock portals on the upper platform, only increase the pressure to reroll or change specs.

Vectis isn’t too bad until you reach Mythic. You need four groups to transfer Omega Vector and it’s simply easier for ranged to do the job. You get to the point where you have to spread the melee players outside of melee range. This is another example where the more melee you bring, the worse the issue becomes.

Even with those punishing mechanics, you still want to bring some melee players, but how many? Four to five melee DPS seems like a popular number. But which melee DPS will get picked, and which one will be the poor kid picked last on playground? Not that I would know what that feels like, at all. Think of these four to five melee spots as chairs. You’ve got Unholy/Frost, Fury/Arms, Survival, Havoc, Enhancement, Windwalker, Retribution, Feral, along with every flavor of Rogue dancing around waiting for the music to stop.

The mandatory raid buffs introduced in Battle for Azeroth play a role. Arms/Fury Warriors get one chair for the attack power buff. Windwalker Monks and Havoc Demon Hunters also get chairs for the physical and magical debuffs they bring to increase your raid’s DPS. A Protection Warrior or Vengeance Demon Hunter could handle the buffs as well; however, neither Protection Warrior nor Vengeance Demon Hunter are particularly strong tanks in 8.0. Your raid likely has a better option.

If you do go with Protection Warrior, or Vengeance Demon Hunter, the chair they open up goes to Unholy/Frost. If Unholy/Frost isn’t tanking, their only other option is melee DPS. If you don’t generously give a chair to the Rogue, he has no other option and doesn’t come. This leaves Feral Druids, Retribution Paladins, Survival Hunters, Enhancement Shaman, and Windwalker Monks. Windwalker and Retribution have the option to go ranged, but only as healers. However, your Ferals, Survival Hunters and Enhancement Shamans have the option to change from melee DPS to ranged DPS. This allows raid leaders to make the smallest composition changes and not mess with their support teams (tanks and healers). Whether external and overt or internal and self motivated, these last players will feel pressure to go with their ranged specs. 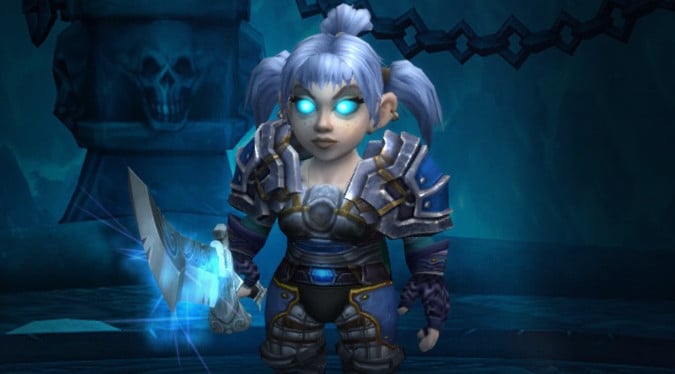 What can players do about this? If a player is dead set on playing melee DPS, they can try to find a guild that will let them, but this isn’t always easy. Players already need to find a raid team with a compatible schedule and goals. The higher up the difficulty curve you get, the fewer options there are. MMORPGs like World of Warcraft are designed to allow players to gate other players from high end content.

Some of the issues with melee DPS are inherent in raid design. I don’t think from a mechanics perspective Battle for Dazar’alor is going to be any easier on melee than Uldir, so melee players will continue being last on the list.  It falls to the the developers to address the issue.

The first place I’d look for a fix is the mandatory raid buffs. Simply spreading those around would give teams greater flexibility. Druids, Shamans and Paladins have a strong history in the game of providing raid buffs, yet today, buffs come from Warriors, and underplayed classes like Monks, and Demon Hunters. They could bring back Mark of the Wild as a copy of the attack power buff. They could make the physical damage debuff a part of the Judgment spell and the spell damage debuff an auto firing totem. These are merely suggestions, of course. Regards of the implementation details, spreading the buffs around to more classes would give raid leaders more options.

Next, I’d improve the performance of Protection Warriors and Vengeance Demon Hunters. Blizzard looks to already have this in the works with the changes in 8.1 for Protection Warriors, but Vengeance needs attention as well. While its probably too big a project to handle within an expansion, I’d look at taking one of the Rogue specs and making it something other than melee DPS when we move along to patch 9.0. They are the only melee class with all three specs having the same role — melee DPS, unfortunately for them.

It’s incumbent upon Blizzard to — at a minimum — acknowledge the issue. Then I’d like to see them offer the community a road map to asolution. Until then, melee players will continue to deal with the pressure to change to a spec or class capable of ranged DPS.